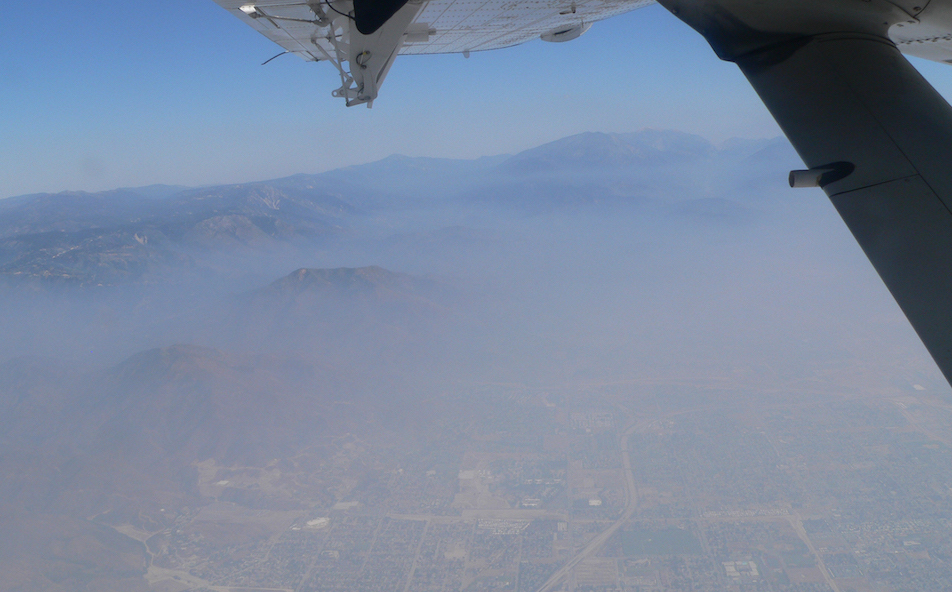 A view of smoggy Los Angeles in 2010, captured by scientists from a research aircraft.

Climate change will make it harder for any given regulatory approach to reduce ground-level ozone pollution in the future as meteorological conditions become increasingly conducive to forming ozone over most of the United States. Unless offset by additional emissions reductions, these climate-driven increases in ozone will cause premature deaths, hospital visits, lost school days, and acute respiratory symptoms.

A new study, discussed at the 2018 annual meeting of the American Academy for the Advancement of Science, revealed another complication in the effort to reduce health-threatening air pollution. It surprisingly revealed that as climate change has been unfolding, the mix of sources of urban air pollution has been changing, which itself presents potentially formidable new challenges for air-quality planners.

That was the surprising finding by 20 representatives of 12 academic and governmental institutions that published it in a report in the latest edition of the journal Science.

At the 2018 annual meeting of the American Association for the Advancement of Science in Austin, leaders of the mammoth project described the painstaking work that went into identifying the gap in the inventories of urban volatile organic compound sources – a gap that had only widened as controls on air pollution from transport- and fuel-related sources reduced emissions.

“It might seem surprising that they could be that much of a problem,” said Brian C. McDonald of the Cooperative Institute for Research in Environmental Sciences at the University of Colorado and the National Oceanic and Atmospheric Administration (NOAA) at Boulder and first author of the report. However, the study, which centered in Los Angeles, found that paints, pesticides, hair spray and perfumes are responsible for half of fossil fuel VOC emissions in industrialized cities.

Even though this study centered on Los Angeles, long known for its air pollution, “emission of these sources will affect urban air quality in other large cities,” said Jessica B. Gilman, a research chemist in the chemical science division of NOAA’s Earth System Research Laboratory in Boulder, Colorado.

“Air quality remains a problem in developed and developing nations,” said McDonald. “Air pollution is the fifth-ranking human health risk factor globally. Four of 10 Americans live in areas of unclean air. Improving air quality means we need to know what the sources of pollution are.”

Answering that question required the work of a large team of chemists, he said. “Like detectives in search of clues, they looked at economic statistics to see how much chemical products are sold, what kind of lab data there are out there, how much emissions occur.”

While they found the use of everyday chemicals is where a lot of VOCs come from, they also found that “transportation remains an important source of air pollution. But as transportation gets cleaner, the sources get more diverse.”

Their finding rests on four key pieces of evidence:

“Consumer products are regulated as a potential source of air pollution, but other chemicals can contribute to the formation of fine particulates (especially tiny particles known as PM2.5)  as they are emitted to the atmosphere,” said McDonald.

Gilman, a NOAA research chemist, led the search for chemical culprits in Los Angeles. “Air quality in Los Angeles is better than it has been in several decades,” she said, “but smog persists.”

To carry out the work, she and other research chemists identified a unique “chemical fingerprint” of common solvents found in everyday consumer products. “While the production chemical products are only 5 percent (of the use of petroleum products), they are nearly equal of transportation-related emissions in the environment,” she said.

However, fuels are kept and used in air-tight tanks, while many of the consumer products such as hand sanitizers, ink and paint are designed to evaporate.

“Colleagues who measure air quality know that even if non-toxic products are used indoors, a significant amount goes outside,” she said. In addition, many of these products contain unlisted ingredients that are not measurable in ambient air.

Measuring the effects of these meant establishing a new framework to understand the connection between the air outdoors and that indoors, she said. “The choices we make every day can affect our air.”

Much work to reduce air pollution has been directed at reducing levels of ozone (O3), which forms when VOCs and nitrogen oxides mix in sunlight, and, more lately, particulate matter. Both near-ground ozone and tiny airborne particles have been regulated as health hazards for decades under the federal Clean Air Act.

“Before this study, we only thought of things like wood burning fires used in indoor cooking as visible sources of such (particle) pollution,” said Christopher D. Cappa of the University of California Davis. “However, there are less visible emissions from a wide range of sources, including personal products. Breathing in these fine particles is the greatest health risk.”

“Our work is at the starting point,” said Cappa, when questioned at a media briefing about what specific products create the most pollution.

“New challenges remain in achieving further declines,” he said. “While we focus on Los Angeles, emissions from these sources [common chemical products] will affect urban air quality in large cities. The relative contribution will depend on the amount of pollution from all sources. In the future, it will be important to draw together the indoor and outdoor [air-quality research] communities. Effective and appropriate mitigation strategies can be developed.”

In an accompanying editorial in Science, Alastair C. Lewis of the University of York in the United Kingdom, wrote, “The shift in the U.S. VOC sources that McDonald et al. report highlights the need for continued surveillance of VOCs as pollutants. Changing patterns of VOC emissions may potentially be seen most clearly by analyzing indoor air – a type of atmosphere that has received considerably less research attention than outside air.”

He noted that volatile chemical products  contained in cleaning products have risen in importance as concentrations of solvents in paints, glues and coatings have been reduced. Yet few air pollution models take into account VOCs specific to personal care products or synthetic forms of VOCs. “As knowledge of VOC chemistry improves, it will become possible to develop more targeted approaches to reducing impacts,” he wrote.

“I don’t think we are at a point where we can say reformulate products,” said McDonald. “We need to know which chemicals are most efficient as forming fine particles. A lot of these chemicals are fairly new.”

“These are choices we make every day,” said Gilman. Those choices may be affected by the results of ongoing research into the makeup of today’s air pollution.

Ruth SoRelle, a medical and science writer for more than 40 years, covered the annual meeting of the AAAS (American Association for Advancement of Science) for Texas Climate News. The 2018 meeting was held Feb. 15-19 in Austin. SoRelle covered a variety of science topics as a reporter for the Houston Chronicle, explained them as chief science editor at Houston’s Baylor College of Medicine, and continues to write about them as an independent journalist based in Houston.

AAAS is the world’s largest general scientific society. The organization’s annual meeting is the premier science gathering in the United States, bringing together researchers from a wide range of fields to showcase some of the most important scientific work going on worldwide.