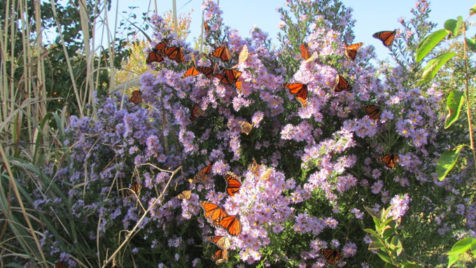 25 monarchs counted in this image of ‘Miss Bessie’ aster plants in tidewater Virginia in early November.

WHITE STONE, VA. – The first sign of an imminent gathering of large numbers of monarch butterflies came from the kitchen window, overlooking the purple Miss Bessie aster plants (Symphyotrichum praealtum) in the side yard.

It was approaching Halloween, and for about the next week, those asters, held upright along a fence line, were ablaze with scores of monarchs at a time – 40s, 60s, and more, all at once and nectaring, usually in mid- to late-sunny day afternoons.

But it wasn’t the sheer numbers that was most notable. It was instead the timing of their arrival along the tidewater area of Virginia, the area north of Virginia Beach and Norfolk. And also there were the similar late arrivals being reported in places like Cape May, New Jersey, and even further north.

Come early November, when the iconic monarchs really should have been crossing the Texas/Mexico border en route to their overwintering site 600 miles south of that border … they instead were still in New Jersey, Maryland, and Virginia and throughout the Mid-Atlantic states. As late as early November, spotters as far north as Ontario were still reporting monarchs yet to have departed for their southbound migrations of up to 2,000 miles.

There are always examples of monarchs departing late in the season for their central Mexico home-sweet-homes – technically the Monarch Butterfly Biosphere Reserve, between Mexico City and Morella and near the cities of Angangueo and Zitacauro. Once there and settled on the oyamel fir trees that dominate the area, the vast numbers roost at the same hillside sites those before them had settled in to.

University of Kansas Professor Emeritus Chip Taylor, PhD, of the Department of Ecology and Evolutionary Biology, says that the 2017 southward migration is the latest he’s seen since he first began tracking the monarch migrations in 1992.

Taylor said in a telephone interview that some cooler August temperatures in the Midwest and Northeast slowed the monarchs’ 2017 development and rate of growth. Coupled with near-record temperatures in those same regions in late September and most of October, the picture becomes clearer.

Taylor, founder and director of Monarch Watch, says it all means those monarchs still in the mid-Atlantic states would face yet another 1,000 miles or so. And this year they would be flying through territory with few flowering plants providing the life-saving nectar they need. They were also headed into areas of nagging droughts and too little water. 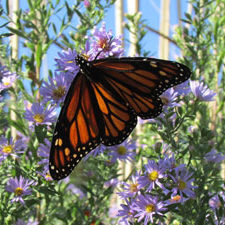 Not great flying conditions if you’re a monarch butterfly already late, hungry and thirsty, and on a tight deadline.

Leaving their northern summer climes at weights of around 500 milligrams, the monarchs need to gain mass and arrive in their overwintering region in the range of 650 to 700 milligrams. That extra mass is critical if they are to survive for their spring northbound migration.

Not much chance of that for those still in the mid-Atlantic in early November, Taylor said. “Virtually none of these monarchs have any chance of getting to Mexico.”

Monarchs, expert at capitalizing on tail winds, can migrate 25 to 30 miles on “good days.” (To Taylor’s knowledge, the record is 61 miles, but he jokes that some of that distance must have come aboard a truck.) That means just-right breezes and lots of hours of daylight each day, with Goldilocks-like temperatures in the 60s and 70s. Warmer day-time temperatures in the 80s and 90s – just like cold waves – simply aren’t conducive to monarchs’ flight plans. Nor are fierce winds and breezes or temperatures short of 55 degrees F.

So does the warming atmosphere present an existential challenge to North America’s millions of monarchs? Or is it a threat instead to the migrations, rather than to the monarchs themselves?

Writing at the Monarch March website, Taylor noted that climate change “poses threats to monarchs throughout their annual cycle.”

“The high temperatures that appear to be in our future seem likely to negatively impact monarchs as well as the milkweeds and nectar plants on which they depend,” he wrote.

“We all make a distinction between the species and the migration,” Taylor wrote in an email. “We could lose the latter but are unlikely to lose the former. If we lose the migration, there are likely to be small populations that survive in Florida, California, and along the southern coasts. If we lose monarchs worldwide, there won’t be many of us left, either.”

The vast monarch population across North America, Taylor explained, is “buffered,” meaning “the total monarch population is not all doing the same thing at the same time throughout its range – except during overwintering.” That’s when some 98 percent of North America’s monarchs are in central Mexico, the balance, from west of the Rockies, mostly along the Southern California coast.

In addition, “there are overlapping generations, and variable climates and other conditions over space and time such that the threats to the population are also variable,” he said.

In addition, “the amplitude of the variation in monarch numbers is much less than we see in many insects,” which means their year-to-year population numbers vary only marginally compared with most of their fellow insects.

With so many of the U.S.’s monarch population over-wintering in central Mexico, their numbers may be at greatest risk during their overwintering. Like the sensitive timing of their migrations southbound, after all, they face timing issues also involving when best to head back north: Too late can mean they become hostage to rising summer heatwaves and drought, and too early means they may confront chills in Oklahoma and elsewhere along their long trips to their over-summering homes well to the north.

No one ever said it’s a cake walk being a migrating monarch. A feast for the eyes as en masse they alight, surely. But not a cake walk for the butterflies or, for that matter, for the humans who delight not only on seeing large groups of monarchs, but also at the sheer splendor of their twice yearly south-north/north-south migrations.