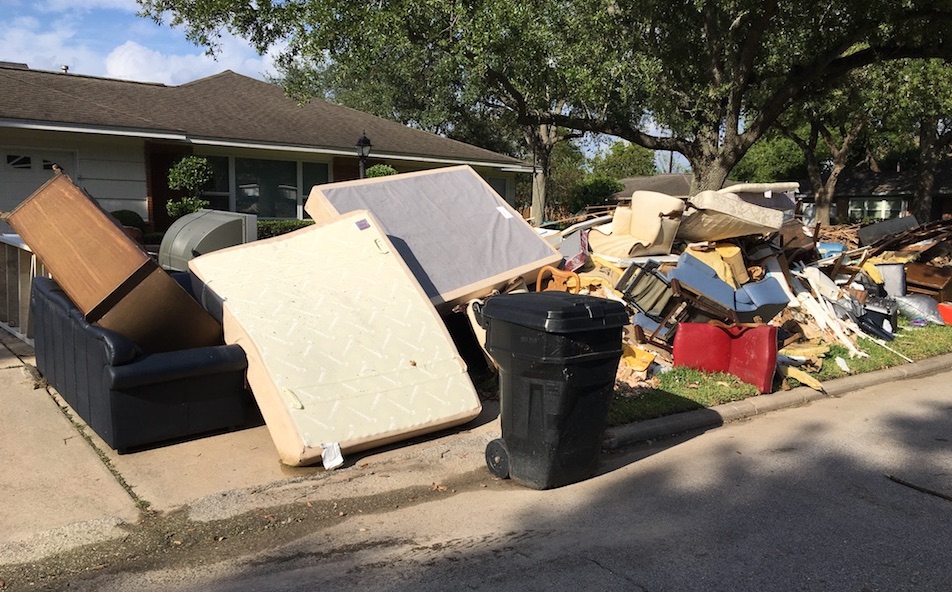 Thousands of Houston homes and other buildings have mounds of flood-ruined debris piled by the street, awaiting pickup and disposal.

Starting nearly four weeks ago, Hurricane Harvey’s deadly and destructive trek in Texas resulted in at least 82 deaths, flooded or otherwise damaged over 100,000 homes and displaced tens of thousands of people.

News and government reports of these mammoth environmental impacts have often focused on particular sources and kinds of pollution – on toxic releases from refineries and chemical plants, for instance.

Here’s a summary overview, assembled by Texas Climate News, of some of Harvey’s key contaminant-related impacts and potential for harm in three basic categories:

State officials reported this week that almost 32 million gallons of raw sewage had been released during Harvey and its aftermath.

The Houston Chronicle reported Wednesday that “10 sewage treatment plants – including six in the Houston area – are inoperable or destroyed, and more than 40 others were operating as of Monday with problems as minor as broken-down pumps or as serious as structural damage.”

Environment Texas, an Austin-based advocacy and education group, reported that the sewage releases were “the equivalent of every person in Houston flushing the toilet seven times.”

The organization posted a sewage-related fact sheet online, collecting information from health officials and other experts, outlining the kinds of disease-causing pathogens in sewage, ways that people are commonly exposed to them in floodwaters, and things people can do to protect themselves.

Researchers from Houston’s Rice University and Baylor College of Medicine in concert with the city’s health department carried out the tests.

They determined that “from Aug. 23 to Aug. 30, 46 facilities in 13 counties reported an estimated 4.6 million pounds of airborne emissions that exceeded state limits,” the New York Times reported.

The three organizations behind that analysis were Environmental Defense Fund, Air Alliance Houston and Public Citizen.

The Austin-based Texas Observer carried out its own analysis of company reports in government records and concluded that “about 40 petrochemical companies along the Texas coast released 5.5 million pounds of pollution as a result of Harvey,” including toxic chemicals and others in different categories that also potentially pose public-health risks.

Experts said that “huge releases of hazardous air pollutants during Hurricane Harvey could’ve been prevented if companies had simply shut down their plants ahead of time or used more advanced emission controls,” the Observer reported.

The Times report included detailed maps of locations that saw excess air pollution releases, flooding of hazardous waste disposal sites, and oil spills and other hazardous releases to the ground or to water.

For reports illustrating some of the different kinds of pollution releases and their potential hazards, see “Valero ‘significantly underestimated’ benzene leak at Houston refinery” in the Houston Chronicle and “Harvey’s flooding blamed in major gasoline spill in Texas” by the Associated Press.

Environment Texas posted another fact sheet this week about the monumental amount of building debris – potentially contaminated with health-threatening substances such as mold, asbestos and toxic household chemicals – left behind by the storm.

The group noted that state officials have offered only estimates so far of the staggering volume:

“That’s enough waste to fill Houston’s NRG Stadium 60 to 90 times over, and it’s two to three times the volume of compacted trash landfilled by the entire state in all of 2015,” Environment Texas calculated.

Among the information about other aspects of the debris problem, the group’s fact sheet included tips for handling destroyed building materials. Another section addressed the question of who will pay for disposal. That question is proving to be controversial in Houston.

Mayor Sylvester Turner, a Democrat, has proposed a one-year boost in property taxes – amounting to about $10 a month for a $225,000 home – to pay for the 10 percent of removal and disposal costs not covered by federal emergency management funds.

But the Chronicle reported Wednesday that state Sen. Paul Bettencourt, an influential Houston Republican and critic of rising local taxes, called the potential increase “callous” and suggested the Legislature would respond negatively if it’s enacted.

That same day at a Houston City Council meeting, tempers flared and council members shouted in a discussion of costs, timing and other questions related to the mammoth debris-removal challenges facing municipal officials.