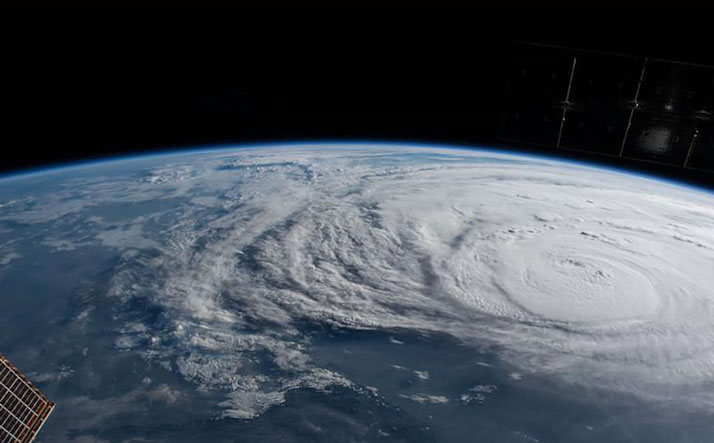 NASA released this photo of Category 4 Hurricane Harvey as it was observed by astronauts aboard the International Space Station.

Hurricanes such as the Category 4 Harvey are mobile, short-lived and violent – so they’re not easy laboratories for studying their relationship with climate change. There’s still much that scientists can’t say for sure.

But they are nailing down more answers. Here are some excerpts from a draft report on the state of climate science from experts in federal agencies and universities.

Human activities have contributed substantially to observed ocean–atmosphere variability in the Atlantic Ocean (medium confidence), and these changes have contributed to the observed upward trend in North Atlantic hurricane activity since the 1970s (medium confidence). Both theory and numerical modeling simulations (in general) indicate an increase in tropical cyclone (TC) intensity in a warmer world, and the models generally show an increase in the number of very intense TCs.

Translation: Greenhouse gas emissions, land-use changes and other human activities seem to have disrupted the long-term interaction of the Atlantic Ocean and the atmosphere. This, in turn, seems to have been a factor in an observed increase in North Atlantic hurricanes in the past several decades.

As the world heats up, the North Atlantic is expected to see more hurricanes – and more of them will be very intense.

There is no consensus on the relative magnitude of human and natural influences on past changes in hurricane activity. … There is still low confidence that any reported long-term (multidecadal to centennial) increases in TC activity are robust, after accounting for past changes in observing capabilities … This is not meant to imply that no such increases have occurred, but rather that the data are not of a high enough quality to determine this with much confidence.

Translation: Despite the big picture conclusions, scientists can’t assign percentages of blame to people or nature. Models use different methods and unknowns are still large. More and better data, collected over a longer time, could clarify the trends.

Extreme rainfall from U.S. landfalling tropical cyclones has been higher in recent years (1994–2008) than the long-term historical average, even accounting for temporal changes in storm frequency. …  Confidence is rated as high in tropical cyclone rainfall projections and medium in intensity projections since there are a number of publications supporting these overall conclusions, fairly well-established theory, general consistency among different studies, varying methods used in studies, and still a fairly strong consensus among studies. However, a limiting factor for confidence in the results is the lack of a supporting detectable anthropogenic contribution in observed tropical cyclone data.

Translation: Hurricanes that reach the U.S. shores are dumping a lot more rain. Scientists are pretty sure that tropical storm rains will keep increasing, and somewhat sure that they’ll grow more intense. They would speak more confidently if they could clear up uncertainties on how much of a role people’s activities played in past hurricanes.

A projected increase in the intensity of hurricanes in the North Atlantic could increase the probability of extreme flooding along most of the U.S. Atlantic and Gulf Coast States beyond what would be projected based solely on RSL [relative sea level] rise. … In addition, RSL increases are projected to cause a nonlinear increase in storm surge heights in shallow bathymetry environments and extend wave propagation and impacts landward.

Translation: With stronger hurricanes, people in Gulf Coast states, such as Texas, could see extreme flooding more often – and where the coast is fairly flat, as in Texas, the flooding is expected to reach farther inland.

However, there is low confidence in the magnitude of the increase in intensity and the associated flood-risk amplification, and it could be offset or amplified by other factors, such as changes in storm frequency or tracks.

Translation: But scientists are not sure how much worse the flooding could get, since lots of things influence what happens in any one storm – such as Harvey.