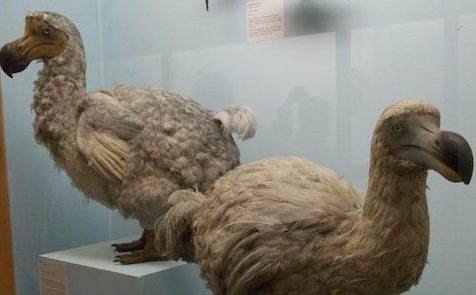 Reconstructions of the extinct dodo in London’s Natural History Museum.

The planet could be undergoing a huge wave of extinction, in what three scientists call “biological annihilation.” They calculate that nearly half of all known vertebrate species are in decline, that many mammals have lost more than 30 percent of their geographic range, and that more than 40 percent have experienced severe population declines.

In the last 100 years, at the most conservative estimate 200 vertebrate species are known to have become extinct. This is an average of two species a year.

Extinction is a fact of biological evolution. There have been five previous episodes of catastrophic extinction in the planet’s history, and even in the long, quiet intervals, each geological epoch has been marked by steady rates of extinction.

“Few realize, however, that if subjected to the estimated ‘background’ or ‘normal’ extinction rates prevailing in the last 2 million years, the 200 vertebrate species would have taken not a century, but up to 10,000 years to disappear,” the scientists write in the Proceedings of the National Academy of Sciences.

And they say: “Our data indicate that beyond global species extinctions Earth is experiencing a huge episode of population declines and extirpations, which will have negative cascading consequences on ecosystem functioning and services vital to sustaining civilization.

“We describe this as a ‘biological annihilation’ to highlight the current magnitude of the Earth’s ongoing sixth major extinction event.”

This great extinction is, implicitly, linked to the growth of human population and the invasion of what was once wilderness.

Although biologists have repeatedly warned that climate change driven by global warming that is in turn fueled by prodigal combustion of fossil fuels brings with it a threat of widespread species extinction, this would represent an extension of already existing hazard.

As forests are being cleared, and savannah and grasslands converted for cattle ranches, rivers being dammed and seas polluted, the millions of plants, insects, fish, reptiles, amphibians, birds and mammals face greater competition for food and ever smaller geographic ranges.

And Paul Ehrlich of Stanford University in California, one of the three authors, warned, four years ago, that the additional 2.5 billion people expected by 2050 “would make the human assault on civilization’s life-support systems disproportionately worse.”

Since then, biologists, ecologists, oceanographers and even climate scientists have kept up the pressure, warning of damage to whole ecosystems, direct threats to tree species and an accelerated rate of local extinctions.

The latest study by Professor Ehrlich and his colleagues is based on a fresh look at an increasingly familiar problem. They mapped the ranges of 27,600 birds, amphibians, mammals and reptiles – that is, about half of all known terrestrial vertebrate species – and analyzed population losses in a sample of 177 well-studied mammal species between 1990 and 2015.

Of these, 30 percent had suffered a loss both in population and range. More than 40 percent of this group had lost more than 80 percent of their range. The authors think 50 percent of individual animals with which humans once shared the Earth have disappeared, along with, they say, “billions of populations.”

“This is the case of a biological annihilation occurring globally, even if the species these populations belong to are still present somewhere on Earth,” said Rodolfo Dirzo, a biologist at Stanford.

“The massive loss of populations and species reflects our lack of empathy to all the wild species that have been our companions since our origins,” said Gerardo Ceballos of the National Autonomous University of Mexico, who led the study. “It is a prelude to the disappearance of many more species and the decline of natural systems.”