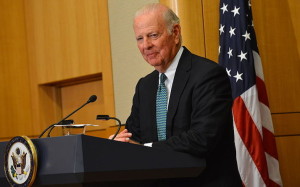 Even as Donald Trump is earning historically high disapproval ratings from Americans as a whole, his fellow Republicans continue to award him with very high approval numbers.

Meanwhile, many prominent “Never Trump” conservatives – who insisted last year that he is not a genuine conservative – have submitted to political reality.

One upshot of these developments is a bumper crop of punditry to the effect that the GOP, which seemed badly fractured a year ago, now truly belongs to the outsider Trump – and that American conservatism itself is now blustery, nationalist Trumpism.

The rapturous reception given to Trump’s speech Friday to the Conservative Political Action Conference seemed to validate that conclusion. Trump’s conference appearance represented “a not-entirely friendly takeover of CPAC, an establishment Republican group whose leadership once viewed the party’s surprise standard-bearer as a noisy interloper,” the New York Times reported.

As Politico put it, Trump arrived at CPAC “as a conqueror, not just of Hillary Clinton and all other 2016 contenders, but of any rival visions for what the modern Republican Party should stand for.”

Rival Republican visions are undoubtedly down at the moment, but they’re not necessarily out when it comes to environmental matters, however.

Recent statements on climate change by prominent mainstream Republicans (including one famous Texan and others with connections to Texan-led presidential administrations) have clearly shown that these one-time leaders from the party’s past aren’t ready to cede that issue to a president who has called man-made climate change “bullshit” and still regards it, according to his chief of staff, as basically “a bunch of bunk.”

Most notable among these signals by Republicans who once held top federal positions was the announcement this month by Houstonian James Baker and others that they were advocating a carbon tax to replace former President Obama’s regulatory measures as the chief U.S. strategy for reducing planet-warming carbon dioxide emissions.

That declaration put the former leaders dramatically at odds with Trump and such top appointees as his Environmental Protection Agency chief, Scott Pruitt, who have consistently indicated they regard human-caused climate change as something that’s not worth taking action against, if it’s happening at all.

Baker, by contrast, has a decades-long history of engagement with the climate issue on the pro-science, pro-action side, dating back to his service as secretary of state when his friend and fellow Houstonian, George H. W. Bush was president. He also served as treasury secretary in the administration of Ronald Reagan (when Bush was vice president) and as White House chief of staff in both the Reagan and George H. W. Bush administrations.

Among other establishment Republicans joining Baker in calling for a revenue-neutral carbon tax were two other former treasury secretaries – George Shultz (who was also secretary of labor under Richard Nixon and secretary of state under Reagan) and Henry Paulson, who headed the Treasury Department under Texan George W. Bush.

To reduce climate-disrupting pollution from fossil-fuel use, the group proposes introducing a gradually increasing tax on carbon-dioxide emissions, returning the proceeds of that tax to all U.S. citizens in quarterly checks.

Despite uncertainties surrounding scientists’ global warming projections, “the risk [of climate change] is sufficiently strong that we need an insurance policy, and this is a damn good insurance policy,” Baker told the Washington Post.

The proposal by Baker and the others in the new Climate Leadership Council was not initially meant to sway Trump or members of his administration. Work on assembling it began quietly during the presidential campaign last year – a time when most pollsters and political professionals (including, reportedly, Trump himself) expected Clinton to win the election. She backed Obama’s climate initiatives and promised to expand them but didn’t close the door on a carbon tax, which was endorsed by her Democratic rival, Bernie Sanders, and then included in the 2016 Democratic platform.

The Climate Leadership Council proposal has antecedents in the climate-action advocacy of other former Republican leaders in recent years. 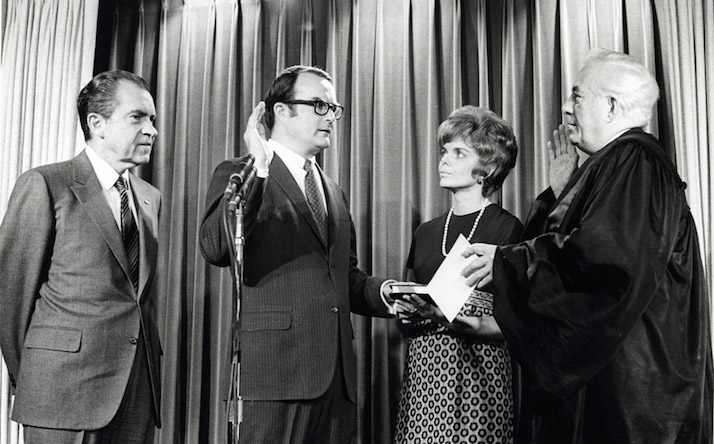 William Ruckelshaus was sworn in as the first administrator of the Environmental Protection Agency by Chief Justice Warren Burger in 1970. President Richard Nixon and Ruckelshaus’ wife Jill looked on.

The four added that “a market-based approach, like a carbon tax, would be the best path to reducing greenhouse-gas emissions.” But since a tax is “unachievable in the current political gridlock in Washington,” they wrote, Congress should get behind then-President Barack Obama’s Climate Action Plan, including regulations such as limits on power-plant emissions in his Clean Power Plan.

More recently, three of those former Republican EPA chiefs  – Ruckelshaus, Reilly and Whitman – have been outspokenly critical of Trump.

Ruckelshaus and Reilly, for example, jointly endorsed Clinton over Trump last year, calling climate change “the singular health and environmental threat to the world today” and denouncing Trump’s “profound ignorance of science and of the public health issues embodied in our environmental laws.”

In December, after Trump selected Pruitt, then Oklahoma attorney general with a strong record of siding with industrial polluters on regulatory issues, to head the EPA, Whitman, the Republican former governor of New Jersey, told an interviewer she could not “recall ever having seen an appointment of someone who is so disdainful of the agency and the science behind what the agency does.”

While Whitman, Baker and the other members of past Republican administrations who favor climate action are still arguing for it in the new Trump era, it’s difficult to see any near-term shift of the political tide in their direction occurring on the issue.

Pruitt told CPAC attendees on Friday that Trump could start rolling back Obama’s climate-protection initiatives – including the power-plant rules endorsed by the four former Republican EPA chiefs in 2013 and restrictions on coal mining on federal lands – as early as this week.

And although the “Conservative Case for Climate Action” presented this month by Baker and the other members on the Climate Leadership Council crucially proposes replacing Obama’s climate regulations with a carbon tax, not simply eliminating them, Trump and Pruitt have never talked about any sort of trade out along those lines.

Indeed, Trump firmly rejected a carbon tax during his campaign, and several key conservative groups immediately launched a counterattack against the Baker-backed idea as soon as it was unveiled. Then last Thursday, the reliably and staunchly conservative Wall Street Journal editorialized against the former Republican officials’ plan, saying it “would hurt the economy with little benefit to the environment.”