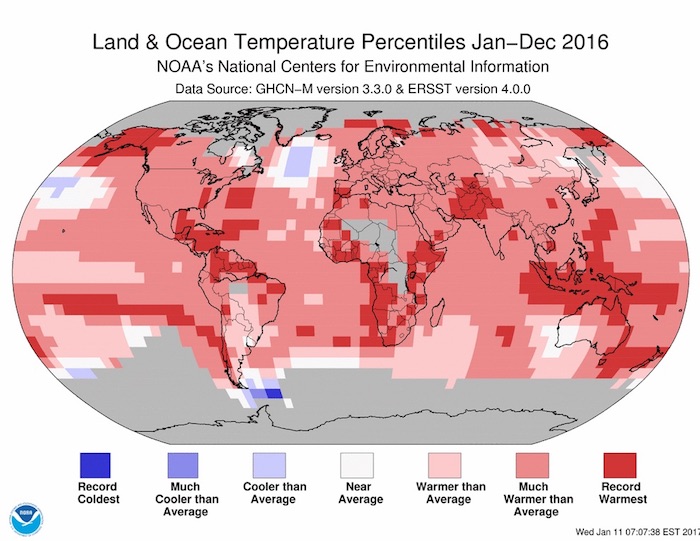 The trend has become glaringly clear: The world is getting hotter, not just year to year, but over many decades – and Texas is part of the manmade trend.

Wednesday’s announcement that 2016 was the globe’s hottest year in the 137-year span of recorded temperatures – and the third record year in a row – was widely expected. So was last week’s government report on U.S. temperatures, which found that the 48 contiguous states had their second-hottest year on record in 2016 and Texas had its third-hottest.

The global figures, released by the National Oceanic and Atmospheric Administration and NASA, with confirmation by other research groups, came during a time when federal agencies don’t know if the incoming Trump administration will heed their findings or even let them keep studying human-induced climate change. One Trump advisor has suggested ending NASA’s climate work.

Oklahoma Attorney General Scott Pruitt, whom Trump has tapped to run the Environmental Protection Agency, is suing that agency on Oklahoma’s behalf (and in alliance with Texas and industry groups) to block mandated cuts in climate-disrupting carbon dioxide emissions from fossil-fuel burning power plants.

With Trump scheduled to take the oath of office Friday at 11 a.m. Central, federal scientists and others across the country are scrambling to archive government climate data on non-government servers in the event top officials order a purge of global warming research, the Washington Post and others have reported.

While U.S. policy on what many science groups call the world’s most critical and urgent problem remains in limbo, the climate continues to heat up, shattering record after record.

Much of the rise in temperatures has come since 1970, with the trend line getting steeper. Although breaking records get public attention, climate scientists pay more attention to longer-term patterns.

“The key thing scientifically is really the trends,” Schmidt said. “The main take-home response here is that the trends we have been seeing since the 1970s are continuing and have not paused in any way.”

The report released Wednesday accounts for the effects of an El Niño warming in the Pacific Ocean that was fading by early 2016. Such temporary phenomena aren’t responsible for the warmer world, Schmidt said.

“The long-term trend is because of the warming of the planet by greenhouse gases,” he said.

NOAA, part of the Commerce Department, and NASA, an independent agency, have slightly different ways of measuring global annual average temperatures, but each reached the same conclusion about 2016.  Each agency said the global average, combining land and sea surface readings, in 2016 was 1.69 degrees F higher than the average for the 20th century.

For land surfaces alone, NOAA found, the global average difference from the last century was far higher – 2.57 degrees F. The difference in sea surface temperatures by themselves was 1.35 degrees F above the 20th century average. Each average was the highest in its category since record-keeping began in 1880.

That there’s been no pause in warming is significant not only because of the dramatic climate effects – “the warming in the Arctic has really been exceptional,” Schmidt said – but also because a supposed warming pause became a Republican point in arguing against action on climate change. Rep. Lamar Smith of San Antonio, chairman of the House science committee, accused federal scientists at NOAA in 2015 of rigging data to hide a warming pause.

The scientists denied the charge, and independent science reviews have endorsed their methods of analyzing data. When critics said that federal researchers had tweaked climate data to exaggerate warming trends, scientists countered that their adjustments – meant to account for an array of complex factors – had actually reduced temperatures before publication.

Earlier this month, yet another independent study confirmed that the NOAA experts were right and Smith’s accusation was false. The Associated Press reported:

The new international study looked at satellite data, readings from buoys and other marine floats for ocean temperatures. Each measurement system independently showed the same 20 years of increase in temperatures that NOAA found: about two-tenths of a degree Fahrenheit per decade since 2000, said the study’s lead author, Zeke Hausfather of the University of California, Berkeley.

Asked on Wednesday if the incoming Trump administration should take a lesson from the news of record high temperatures, Arndt went back to the agencies’ mission of sticking to finding and distributing facts.

“We provide these assessments and these analyses for the benefit of the American people, and that’s kind of what we do,” he said. “Our mission is strictly to describe this data and the climate and our methods for how we got there.”

Randy Lee Loftis, an independent journalist in Dallas, is senior editor of Texas Climate News. He was formerly environmental reporter of the Dallas Morning News.