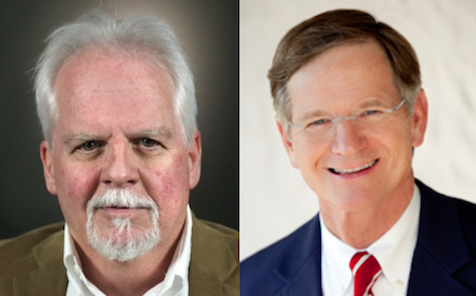 Democrat Tom Wakely (left) is running against Republican incumbent Lamar Smith in the congressional race in District 21 in Central Texas.

Update: Longtime Republican incumbent Lamar Smith received 57 percent of the vote to defeat Democratic challenger Tom Wakely, who got 36 percent. Smith’s percentage was his lowest since he first won the District 21 congressional seat 30 years ago. He received 72 percent in 2014.

Block-walking through his Northeast San Antonio neighborhood recently to call on potential voters, Democratic congressional candidate Tom Wakely brought up the subject of climate change, his centerpiece issue, when he called on Judith Laufer, a disability advocate.

“Did you get hit with the hailstorm at all? Back in the spring?” he asked, then quickly linked that local weather event to the global climate trends he’s highlighting in campaign.

“Yeah, climate change,” Wakely said, continuing his pitch to Laufer. “It’s here. Storms are going to be getting worse and worse. We’ll still be having the storms we have now, but they will get worse. That’s what a lot people are saying.”

Wakely’s effort to persuade voters that the threats posed by manmade global warming are real and merit urgent action may seem like a quixotic effort in Texas’ 21st congressional district.

Lamar Smith, the Republican incumbent, has won reelection 14 straight times since his first election to Congress during the Reagan administration in 1986. There was no Democratic challenger in five of Smith’s races. He has never received less than 60 percent of the vote.

But over the past few years Smith, chairing the House Committee on Science, Space and Technology, has built a reputation as, arguably, Congress’ most forceful and prominent critic of climate science and opponent of pollution-cutting climate action. That’s a record that motivates climate-action advocates like Wakely at the same time it endears Smith to conservatives in the historically right-leaning district who share his views on climate.

Wakely, whose single-story home doubles as a small hospice, mainly providing care to military veterans, readily acknowledges the challenge he has faced during his campaign, one of the few nationwide to focus so strongly on the climate issue.

“One of the things I’ve noticed is that some people tend to shut down when they hear the words ‘climate change,’” he told Texas Climate News.

“But when you make it personal and relate it directly to what’s going on in their lives, that’s when they start to listen. For example, folks in the Hill Country are dealing with water shortages. When we have genuine conversations about how climate change is playing into the issues they’re facing at home, that’s when it really sinks in.”

Wakely – who is also stressing campaign-finance reform, veterans’ care, Social Security and health care – explained in an email to TCN why he chose climate change as his principal focus:

Lamar Smith is arguably the most powerful climate-change denier in the United States. It’s his greatest strength, but it’s also his greatest weakness. Smith’s rejection of climate-change evidence demonstrates his disconnect from the people he represents. Even among conservative voters, the consensus on climate change now encompasses the majority. … I see climate change as the defining issue of this point in history. It’s a cause that I believe can genuinely unify the American public in a time of partisan polarization like we’ve never seen before.

Smith’s campaign staff did not respond to TCN’s requests to comment for this article. But he has never been reticent about his views on climate change, especially in connection with his actions as Science Committee chairman, which most controversially include a number of subpoenas he issued to federal climate scientists, the attorneys general of New York and Massachusetts and environmental organizations. 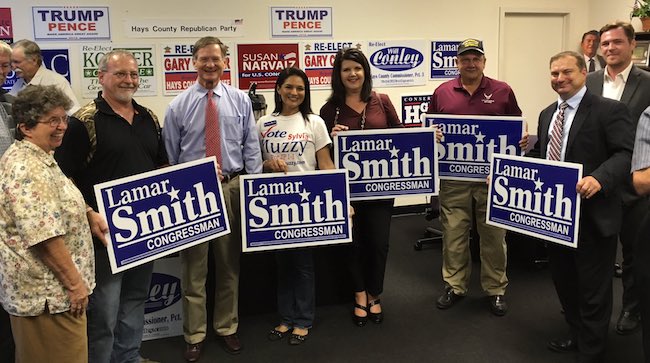 Smith has challenged the science undergirding researchers’ conclusions about climate change and the dangers it poses; accused federal scientists of fudging key data; denounced the Obama administration’s efforts to reduce climate-disrupting pollution from fossil fuels as an “extreme climate agenda;” and argued that planned U.S. action to cut those emissions will bring extreme costs but scant environmental benefit.

San Antonio-based Texas Public Radio reported last week that he said recently the race pitting him against Wakely and two other candidates isn’t about climate and the subject rarely arises in his conversations with constituents.

A campaign spokesman for Smith offered a confident observation recently to a reporter for the Washington-based ClimateWire website: “It’s a Republican-leaning district where Lamar has been largely popular. They know where he stands on issues that are important to them, and they show up and re-elect him.”

A tough race against a longtime incumbent

Smith, a 69-year-old attorney, was born in San Antonio. He worked briefly as a journalist and entered politics a few years after his admission to the bar. Before his initial 1986 election to Congress, he was elected to the Texas House of Representatives and the Bexar County Commission.

Wakely, 63, also a San Antonio native, is an Air Force veteran. He worked for unions (including coordinating a grape boycott in San Antonio for the Texas Farm Workers in the 1970s) before graduating from a seminary. He later served as a minister and worked on faith-based initiatives on social justice and affordable housing.

District 21 runs along the heavily-populated I-35 corridor between southern Austin and northern San Antonio. But thanks to its wide western fan – which includes cities such as Fredericksburg and Kerrville as well as scenic rural areas – it’s not the kind of district dominated by urban concerns where Texas Democrats tend to do best.

Political analysts have not given Wakely much hope of beating Smith – “slim” and “slim to none” are some of the terms they’ve used.

It’s not just a two-person race either, so the non-Smith vote will be split among three people. Libertarian Party candidate Mark Loewe and Green Party candidate Antonio Diaz are also on the ballot. With no Democrat running in 2014, Diaz took 15 percent of the vote and Libertarian Ryan Shields got 13 percent.

Diaz told TCN he is eager to garner more votes than Wakely because Wakely, at their first meeting, asked him to drop out of the race – a request confirmed by Wakely spokesperson Allison Pope.

Perhaps because of the perceived long-shot nature of Wakely’s effort, he failed to receive the hoped-for support of either the national Democratic Party or the League of Conservation Voters, a multi-issue group that essentially serves as the leading election-support wing of the national environmental movement.

Wakely did, however, receive the endorsement of Climate Hawks Vote, a newer, smaller environmental advocacy group, which is sharply focused just on climate change.

This young group – founded in 2014 – doesn’t endorse many candidates but chose to support Wakely because he is “good on climate and he’s running against Lamar Smith,” said RL Miller, one of the organization’s founders.

The group praised Wakely for “running as a champion of climate science [and] connecting the dots among Texas’ record floods, the religious imperative to care for what God created, and the need for urgent action.”

Even with the formidable obstacles arrayed against Wakely, the San Antonio block walk when he met Laufer had an upbeat feel. The candidate himself and much of his campaign team were energized by Bernie Sanders’ candidacy for the Democratic presidential nomination. 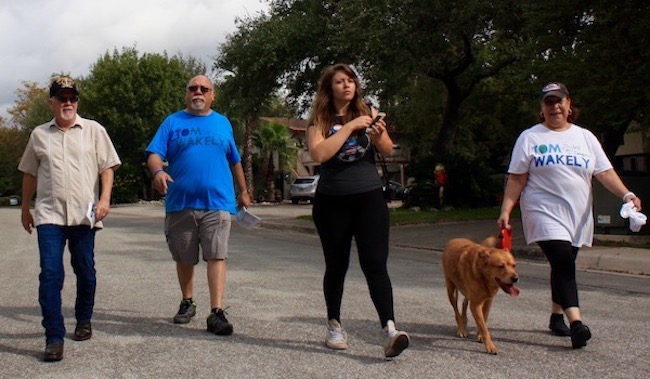 Planning the walk, the small team of under-30 campaign workers who had gathered in the back of Wakely’s home seemed to smell opportunity.

Campaign events in the more conservative Hill Country have been better attended then expected, they said. Potential voters encountered there have been less cantankerous than feared. Shifting demographics along the interstate because of new families moving in are a cause for hope, as are the hundreds of new voter registrations that the team said happened daily at Texas State University in San Marcos in days leading up to the Oct. 11 deadline.

He may not win the election, but Wakely’s campaign has at least been a catalyst for more local attention to climate change and scrutiny of Smith’s climate record, amplifying earlier accusations, reported by national and local media, that his Science Committee subpoenas amount to “bullying” and “intimidation.”

The San Antonio Express-News, in an editorial declining to make an endorsement in the District 21 race, noted that it has in the past supported Smith for election because his “conservative credentials” are “a good fit” for the district.

But the newspaper, which had endorsed Smith in the Republican primary this year, declared it could not endorse him for reelection because “his bullying on the issue of climate change” – including a threat of criminal charges against the head of the National Oceanic and Atmospheric Administration (NOAA) – “should concern all Americans.”

In spite of Smith’s diminishment of climate change’s risks, the editorial added, “there is broad and deep consensus in the climate science community that man’s role in global warming is substantive and that left unaddressed, this portends disastrous consequences.”

Smith drew similar criticism in an opinion column and editorial in The Daily Texan, the student-produced newspaper of the University of Texas. The editorial, endorsing Wakely while predicting he won’t win, charged that Smith had “abused his power” with the subpoenas. The column, written by an undergraduate history and corporate communications student, said Smith is obstructing “our struggle against climate change.” The writer approvingly quoted a Yale Law School report that likened his subpoenas to “McCarthyism.”

Smith responded to the student’s column with one of his own, published by The Daily Texan, in which he repeated his previous contentions that the subpoenas to NOAA were aimed at misuse of scientific data (an allegation that the agency and leading science organizations strongly denied).

He wrote that the subpoenas to the New York and Massachusetts attorneys general, as well as those he sent to NOAA and to eight environmental organizations, were “not about climate change, but about the constitutional right of the [Science] Committee to protect the freedom of scientific inquiry and to ensure regulations are based on sound science, not political motivations.”

The New York and Massachusetts officials, issuing subpoenas of their own, drew Smith’s attention because they have been investigating whether ExxonMobil misled investors and the public over many years by hiding its own research findings about links between fossil-fuel use and global warming. The environmental organizations have similarly been trying to determine whether fossil-fuel companies misled the public regarding researchers’ findings about climate change.

Climate Hawks Vote last month released a poll of District 21 voters that it had commissioned, which the group said showed Smith is vulnerable to criticism on the subpoenas issue as it relates to ExxonMobil.

The science journal Nature reported in a news article last month that “thus far, many of Smith’s subpoenas have come to naught,” with the attorneys general and environmental groups refusing to comply with Smith’s document requests and NOAA handing over some documents but excluding researchers’ internal communications.