Sea-level, ice-melt concerns echo from Rio to Texas and points far beyond 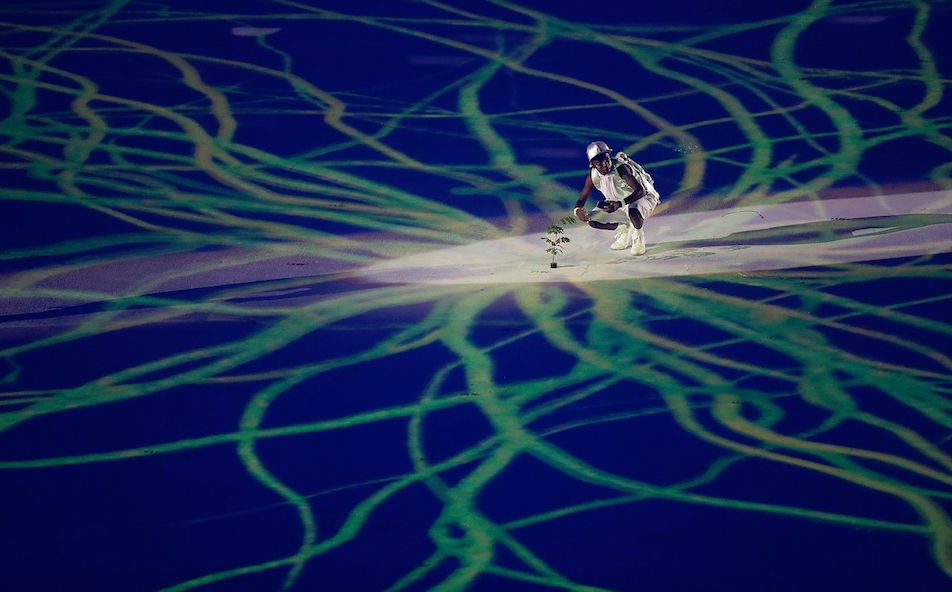 The “central theme” of the opening ceremony of the 2016 Olympics in Rio de Janeiro, Brazil last week – the ice-melting and sea-level impacts of climate change  – has echoed in a variety of far-flung places and different ways in recent days.

In what an Olympics organizer called “the core of our ceremony” and “a message to the world,” the opening ceremony offered 3.3 billion viewers an introduction to the basics of global warming’s melting of ice in frigid regions, resulting in elevation of sea levels worldwide and inundation hazards looming for major population centers.

“The heat is melting the ice cap,” the narrator of a film said. “Look at Greenland in the last decade. It’s disappearing very quickly.”

Following was a succession of maps, showing projected flooding of major parts of a sample of coastal areas around the globe – Amsterdam in the Netherlands, Dubai in the Middle East, Florida, Shanghai in China, Lagos in Nigeria, and Rio itself.

The presentation, the Olympics official said on NBC’s broadcast of the event, was intended as “a message to the world.”

Researchers for the real estate website Zillow announced that they had estimated that 1.9 million residences around the country, including 46,804 in Texas, could be submerged in one typical sea-level rise scenario by the end of the century.

To produce those numbers, Zillow combined its own database with maps by federal scientists showing U.S. areas that would be submerged (at least their ground floors) by 2100 if sea levels rise by six feet or more.

“Some estimates suggest sea levels will rise that much by the year 2100 if climate change continues unchecked,” the Zillow report noted.

Florida stands to be the worst-hit state in Zillow’s calculations, with an estimated 934,411 homes inundated, or about 12.6 of the state’s total number of residences.

The 1.9 million homes at risk nationwide have a combined value of $882 billion, the researchers said. The value of the possibly inundated Texas residences was estimated at $12 billion.

Those home submersion numbers by Zillow are projections of “potential” impacts. An Australian study, published in the journal Environmental Research Letters, reported that sea-level rise and coastal erosion have already caused the disappearance of five islands in the Solomon Islands of the South Pacific.

An additional six islands have experienced “severe erosion,” with the loss of 10 houses on one, the France 24 television channel reported.

France 24 further quoted the researchers: ”Shoreline recession at two sites has destroyed villages that have existed since at least 1935, leading to community relocations.”

The scientists said the five islands – Kakatina, Kale, Rapita, Rehana and Zollies  that had vanished were all vegetated reef islands up to five hectares (12 acres) that were occasionally used by fishermen but not populated.

Sea-level rise is the best-known and most broadly troubling manifestation of climate-change-driven melting in frigid regions, but recent reports underscored the potential for it to create very different and more localized hazards.

One current case in Siberia involves an instance of what is colloquially called “zombie” anthrax. The outbreak of the potentially deadly bacterial disease occurred when anthrax spores were released from frozen soil, where they were dormant and posed no risks, as a result of melting permafrost.

The LiveScience news website reported that 13 people had become ill and more than 2,000 reindeer killed in an event reflecting scientists’ longstanding warnings about ways that global warming might activate dormant pathogens, maybe including microbes believed to be extinct.

George Stewart, a medical bacteriologist at the University of Missouri College of Veterinary Medicine, told LiveScience that the current anthrax episode will probably end soon, thanks to preventive measures effective in curbing the spread of the disease.

While the anthrax outbreak involves an immediate threat to people and wildlife, scientists are expressing new concerns about a longer-term hazard that melting may unleash in Greenland – the release of various kinds of hazardous waste in frozen tunnels.

The tunnels were created by the U.S. Army Corps of Engineers as part of an underground city in what was called Project Iceworm, secretly undertaken in the 1950s to study the possibility of launching missiles from within the ice, the journal Science reported.

The project was abandoned in 1967, but Science reported that expectations that it would remain locked harmlessly in ice have proven to be ill-founded, thanks to global warming.

Engineers anticipated that the ice – already a dozen meters thick –would continue to accumulate in northwestern Greenland, permanently entombing what they left behind.

Now, climate change has upended that assumption. New research suggests that as early as 2090, rates of ice loss at the site could exceed gains from new snowfall. And within a century after that, melting could begin to release waste stored at the camp, including sewage, diesel fuel, persistent organic pollutants like PCBs, and radiological waste from the camp’s nuclear generator, which was removed during decommissioning.