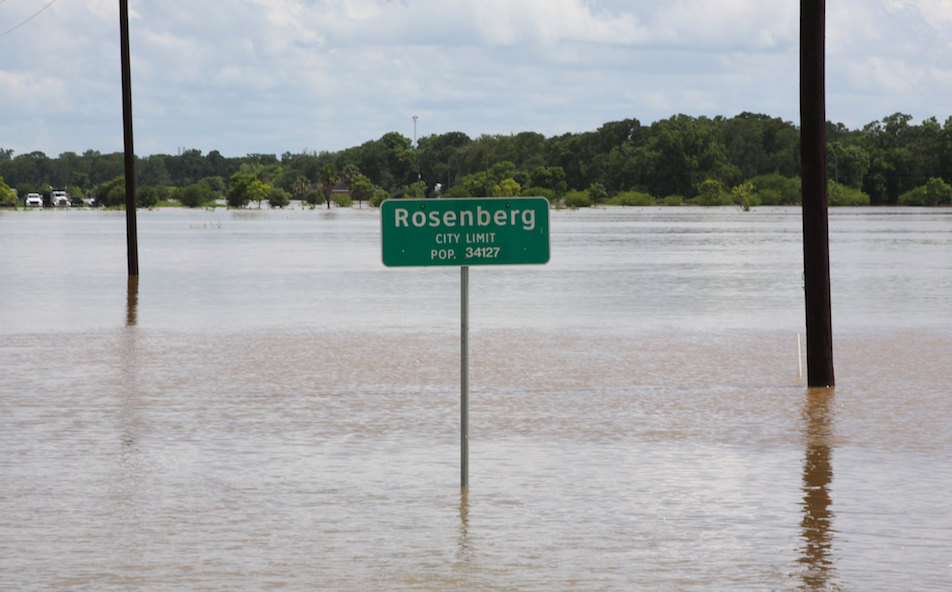 The Fort Bend County city of Rosenberg was one of the Houston-area locations hit by major flooding this month.

In 2005, costs from flood damage in Texas were estimated in the vicinity of $3 billion. Houston’s devastating Memorial Day flooding last year brought costs estimated above $45 million.

Now, a punishing series of major flood events this year have Texans, particularly in and around Houston, increasingly discussing with renewed interest some questions that have floated around for years.

Questions, for instance, about restricting development in flood prone areas, about slowing (and maybe reversing) the conversion of flood-retaining natural areas like wetlands, and about the increasing role in Texas flood disasters of humanity’s prodigious emissions of planet-warming, deluge-boosting carbon pollution.

Whether recent flooding inspires Texans to summon enough political and social will to confront such longstanding issues with action is a wide open question.

One more mammoth flood, even a string of them, doesn’t necessarily foretell a quick and concerted response from government and corporate policy makers in the Lone Star State.

Consider that local and state leaders are still only talking about whether and how to construct some sort of barrier system to protect vulnerable areas in the Houston-Galveston region against storm-surge flooding, nearly eight years after Hurricane Ike catastrophically flooded Galveston and underscored fears about what such a flood event, or an even worse storm surge, might do to the nationally crucial oil and chemical complex along the Houston Ship Channel.

Participants in discussions about hurricane-driven flooding, like Ike’s, and flooding from inland storms, like this spring’s Texas inundations, may find motivation, or at least food for sobering thought, in a couple of recent reports from prominent institutions.

Projections of greatly increased monetary costs because of flooding made worse by manmade climate change are featured in both documents – one issued this month by the nonpartisan Congressional Budget Office (CBO) and the other in May by the World Bank.

Noting that “damage from hurricanes is expected to increase significantly in the coming decades because of the effects of climate change and coastal development,” CBO’s analysts estimated increased damage costs (and their impact on the federal budget because of storm-relief requests), and listed possible policies for reducing federal assistance.

The agency concluded that hurricane-damage costs will grow faster than the U.S. economy, measured as gross domestic product (GDP) through this century:

According to the agency’s estimates, expected annual damage currently amounts to 0.16 percent of GDP (about $28 billion); by 2075, however, that figure reaches 0.22 percent (equivalent to about $39 billion in today’s economy). Roughly 45 percent of that increase is attributable to climate change and 55 percent to coastal development.

As an example of how climate projections factor into predicted increases in hurricane costs, the CBO report discussed forecasts in warming-driven sea-level rise, which scientists say will boost hurricanes’ storm surges. Under current conditions, the agency calculated, Texas has the second-highest projected hurricane damage among the states – 13 percent of the national total. Florida is by far the most at-risk state, with 55 percent of expected damage costs.

But Florida has lower projected rises in sea level because of climate change than Texas – an average 1.4 feet by 2075, compared to the Texas coast’s average 2.1-foot rise in the same period. Louisiana, ranking third in damage under current conditions, is projected to have an average 2.8-foot rise by 2075.

The CBO report also sketched out several policies that might reduce hurricane-damage costs (and therefore federal recovery spending) in the categories of reducing greenhouse-gas emissions, “shift(ing) more (recovery) costs to state and local agencies and private entities, thereby reducing coastal development,” and investing in often-costlier infrastructure that is less vulnerable to hurricane damage.

The World Bank report looked globally at both climate-related and “geophysical” hazards, including earthquakes and landslides, and warned that fast-growing cities worldwide aren’t planning and introducing resilience measures sufficiently for the growing risks they face.

“With climate change and rising numbers of people in urban areas rapidly driving up future risks, there’s a real danger the world is woefully unprepared for what lies ahead,” said John Roome, senior director for climate change of the World Bank Group, when the report was released.

With regard to flooding hazards alone, the report included stunningly large projections: The world population exposed to river and coastal flooding is expected to increase from 992 million in 2010 to 1.3 billion in 2050, with at-risk assets in those areas jumping from $46 trillion to $158 trillion as development progresses. The portions of urbanized areas exposed to river and coastal floods is expected to increase from about 17,000 square miles to 27,800 square miles in the same period, with damage soaring from $27 trillion to $80 trillion.

Flood-aggravating subsidence – sinking land because of water, oil or gas pumping – has been a problem in Houston for decades and is being discussed again because of the city’s recent major flooding. The World Bank report made clear that Houston is not alone in grappling with the issue:

Global sea-level rise of up to 0.6 meter [nearly 2 feet] this century will increase disaster risk significantly in coastal areas. In addition, subsidence (sinking land) will increase the likelihood of flooding locally. In some coastal megacities subsidence has a greater influence on flood hazard than sea-level rise; the former occurs at a rate of up to 100 millimeters/year [about 4 inches], in comparison with up to 10 millimeters/year [0.4 inch] for the latter.

The World Bank study cited a number of previous research projects by the organization, including one reported by Texas Climate News in 2013. It projected that Houston would have the seventh-biggest percentage increase by 2050 among the world’s 136 largest coastal cities in average annual losses from storm damage caused by sea-level rise.

That study concluded that if measures such as dikes, pumps and movable surge barriers are introduced to keep the probability of flooding at the current level, Houston will still experience  average annual losses of $190 million by 2050 – about a 60 percent increase.

In a scenario that assumes an “optimistic” sea-level rise of about 7.9 inches (toward the low end of scientists’ projections), along with coastal subsidence and population and economic growth, new protective structures could keep average losses in the Houston area from increasing, the researchers said. But they added that just one storm surge above these new defenses in 2050 could itself bring $9 billion in losses. Estimated Texas losses because of Hurricane Ike totaled about $20 billion.