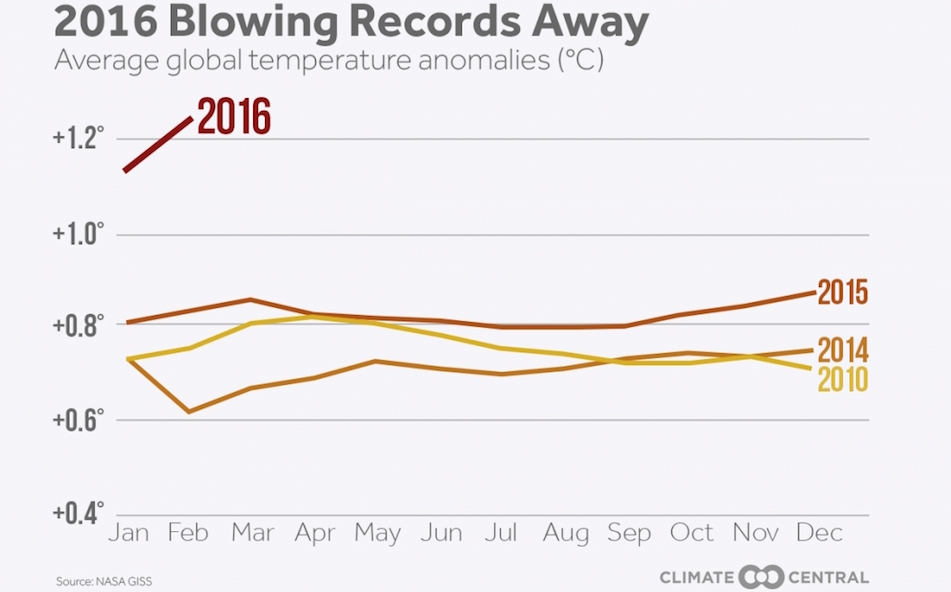 The record-obliterating warm temperatures of February and the December-February winter quarter provided a verbal challenge for scientists trying to do them justice in their descriptions.

“The startlingly high temperatures so far in 2016 have sent shockwaves around the climate science community,” explained David Carlson, director of the World Climate Research Programme in a statement marking this year’s World Meteorological Day, March 23, whose theme is “Hotter, wetter, drier. Face the future.”

Carlson was referring to an announcement last week by the U.S. National Oceanic and Atmospheric Administration, a similar report by NASA a few days before, and other scientists’ confirmatory findings – that last month’s global average temperatures and those of the 2015-16 winter quarter had smashed previous records in a stunning way.

Seth Borenstein of the Associated Press suggested just how stunning the winter warmth was to researchers in his account of the NOAA findings:

Earth got so hot last month that federal scientists struggled to find words, describing temperatures as “astronomical,” ”staggering” and “strange.” They warned that the climate may have moved into a new and hotter neighborhood. 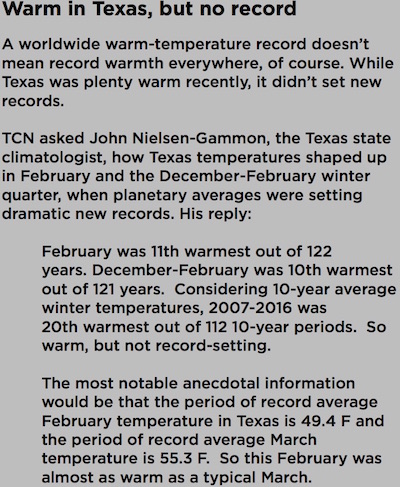 The World Meteorological Organization placed the record-breaking temperatures of recent months in the context of its conclusions about planetary conditions last year:

The global average surface temperature in 2015 broke all previous records by a wide margin, at about 0.76 degrees Celsius above the 1961-1990 average because of a powerful El Niño [a cyclical weather pattern in the Pacific Ocean] and human-caused global warming. With 93 percent of excess heat stored in the oceans, ocean heat content down to 2,000 meters also hit a new record.

Scientists commenting on the new February and December-February records have observed that they resulted from two related factors – the effects of heat-trapping fossil-fuel pollution plus an El Niño-caused release of heat from the waters of the Pacific. 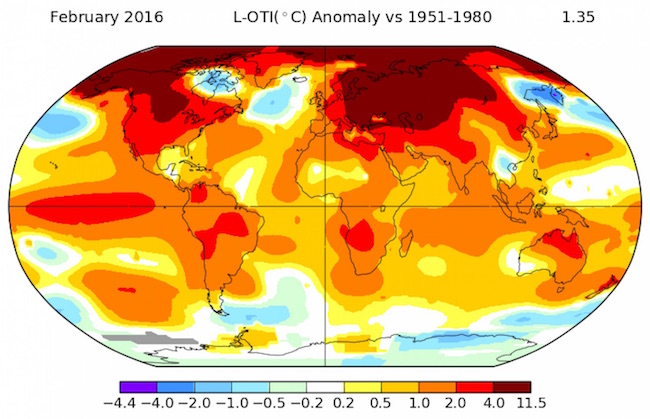 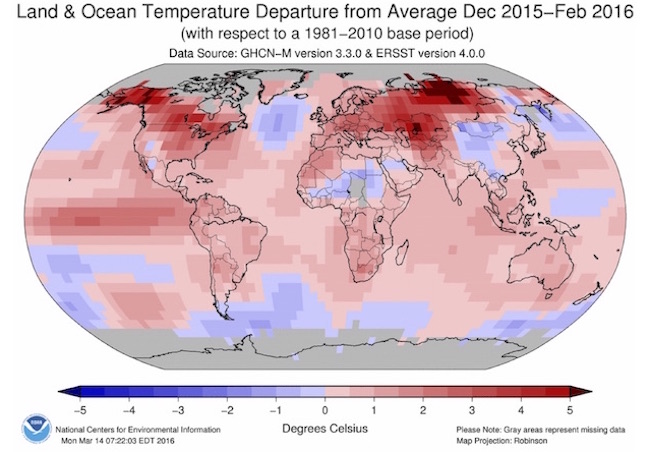 For the December-February period:

With a record warm December and seventh warmest February, the contiguous United States observed its warmest December–February on record, at 2.6 degrees C (4.6 degrees F) higher than the 20th century average. The six states in the far northeastern part of the country were all record warm for the period. With its warmest February on record, Alaska observed its second warmest winter on record, at 5.9 degrees C (10.6 degrees F) above average.

Most of Earth’s land surfaces were warmer than average or much warmer than average…with record warmth notable across various areas of South America, much of southern Africa, southern and eastern Europe, around the Urals of Russia, and most of Southeast Asia stretching to northern Australia. Of significance, a vast region stretching from central Russia into eastern Europe, along with most of Alaska, observed February temperatures more than 5 degrees C (9 degrees F) above the 1981–2010 average….A few pockets in Asia were cooler than average, including part of Far East Russia, with one area record cold in the upper Kamchatka Peninsula. 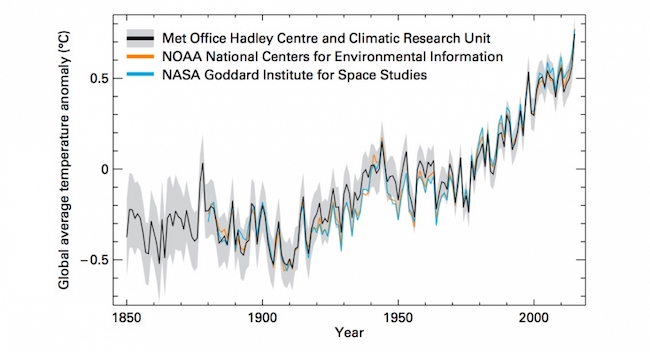 This chart compiled by the World Meteorological Organization shows the general agreement in temperature records of the U.K. Met Office and two U.S. science agencies, NOAA and NASA.

John Nielsen-Gammon is a member of TCN’s volunteer Advisory Board, serving strictly in his capacity as regents professor of atmospheric sciences at Texas A&M University.