A clash of green and brown: Germany struggles to end coal 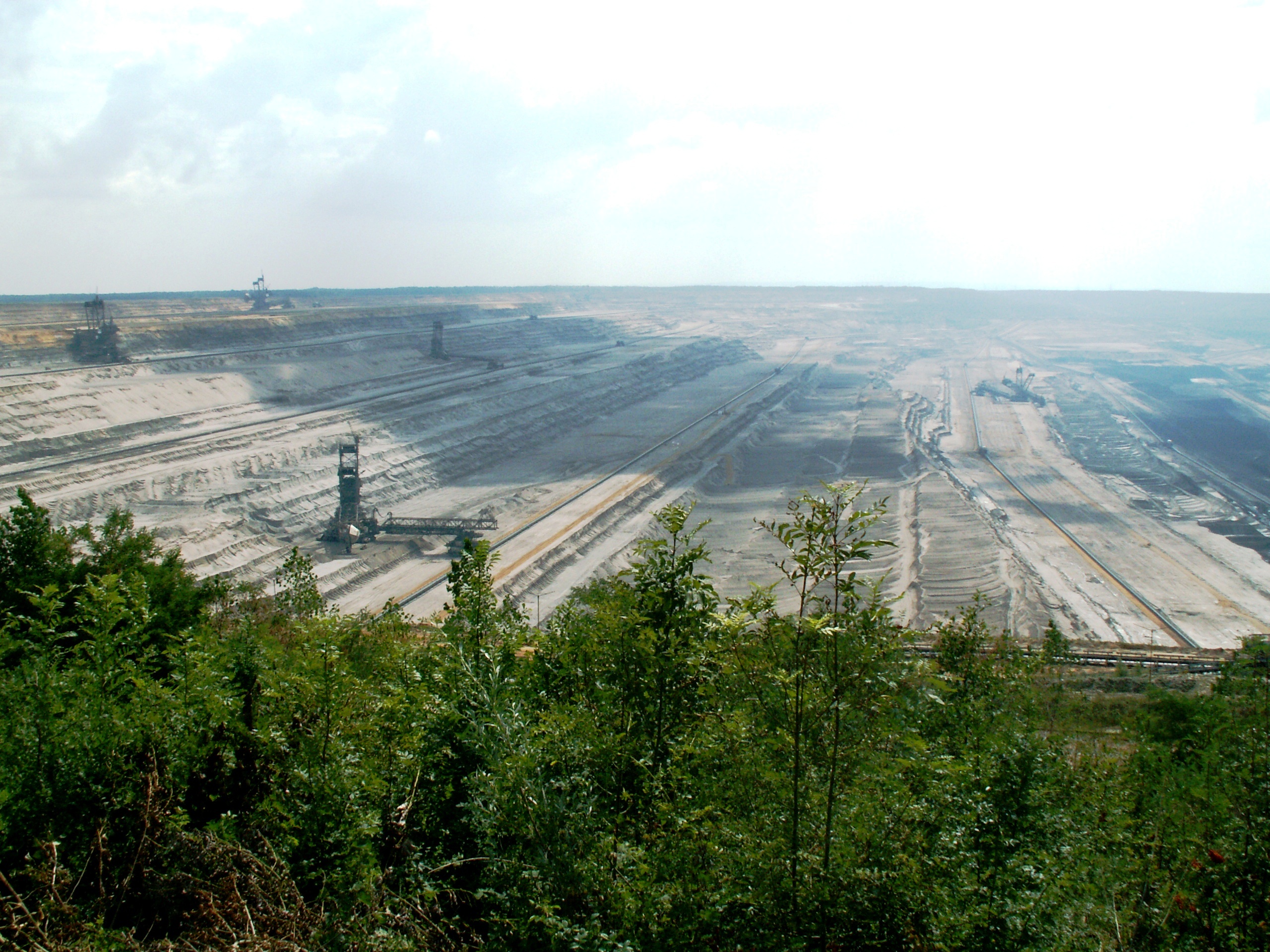 Lignite surface mine near Cologne, Germany

The hole in the landscape that opens up in front of the group of visitors is so vast and deep that some of them simply stare, mouths agape. “This mine will be active until 2026 or 2027,” says Barbara Wittig, a guide with a local operator of excursions into one of Germany’s largest open-pit lignite mines.

Down below at the bottom of the mine, workers are busy running gigantic machines to remove the topsoil and dig deep into a layer of brown coal, or lignite. These rich seams of fossil fuel have provided the Lausitz region, 60 miles southeast of Berlin, with jobs and incomes for more than a century. “We certainly hope that mining will continue after 2027 and we keep producing reliable electricity in our beautiful power plants,” Wittig says, pointing toward large cooling towers on the horizon, which send steam into the atmosphere.

These towers also spew a much more problematic gas: The three regional coal-fired power plants — Jänschwalde, Boxberg, and Schwarze Pumpe — are among the largest point-sources of CO2 emissions in the world. In recent months, Welzow-Süd and other lignite mines have become the subject of heated controversy in Germany as their continuing operations clash with the country’s ambitions of being a green energy powerhouse. That conflict has sparked a battle over imposing a special “climate fee” on coal-fired power plants.

Germany is Europe’s largest economy, and its wealth depends heavily on exporting industrial goods made with cheap electricity. Lignite is the cheapest source of electricity from fossil fuels, and Germany has the world’s largest reserves of it. But lignite causes the highest CO2 emissions per ton when burned, one-third more than hard coal and three times as much as natural gas.

Yet Germany also has the most ambitious green energy strategy of all the industrialized nations — the Energiewende, or energy transformation. After the Fukushima nuclear disaster, Germany’s conservative chancellor, Angela Merkel, vowed to phase out all nuclear power plants by 2022, while simultaneously sticking to the pre-existing goal of reducing national CO2 emissions 40 percent below 1990 levels by 2020 and by 80 to 90 percent by 2050.

While Germany prides itself as a green champion, something paradoxical has happened in the last several years: CO2 emissions steadily fell from 1,051 million metric tons in 1990 to 813 million tons in 2011, the year of the Fukushima disaster. But in 2012 and 2013, CO2 emissions rose again to 841 million tons. This can largely be attributed to an increase in the use of lignite for electricity production.

When the emissions data was compiled last year, alarms went off in Merkel’s chancellery, and even more so when an expert report projected that Germany would fall short of its 2020 CO2 target by five to eight percentage points. Merkel has rejected criticism that her government’s nuclear phase-out is responsible for this gap. Germany’s emissions have gone up, she said, because the country has exported more electricity from lignite to neighboring countries and because the European Union’s trading system for CO2 emissions certificates has worked poorly.

In contrast to previous warnings that the Energiewende would lead to a shortage of electricity and possibly even power outages, Germany exported a record amount of about 5 percent of its total electricity production to neighboring countries in 2013. The surplus electricity not only came from the growing number of German wind farms and solar installations, but also from increased lignite use. Power production from renewable sources like wind, solar, and biomass has soared in recent years to a record level of 26 percent of electricity generation in 2014.

This contributed to a significant drop in overall prices for electricity bought wholesale by large consumers. At the same time, electricity from lignite became cheaper due to another factor: As economies throughout Europe weakened due to the global financial crisis, companies reduced their production and thus had to buy fewer EU certificates for emitting CO2. As a result, the price utility companies have had to pay for emitting a ton of CO2 into the atmosphere crashed, from a historic high of nearly 30 euros per ton in 2008 to just over 3 euros per ton in 2013. This has made burning lignite very attractive.

For industrial users, Germany has become a source of cheap electricity — but not for private consumers in Germany, who bear the brunt of building up renewable power sources as a result of German feed-in tariffs.

“Without the collapse of the CO2 certificate price, Germany’s emissions would most probably not have increased,” says Otmar Edenhofer, professor for the Economics of Climate Change at the Technical University Berlin.

Nevertheless, Chancellor Merkel and her coalition partner, the Social Democrats, don’t want to be seen as betraying the Energiewende goals. “It would be hard to justify the expenses for renewable energies if CO2 emissions keep rising again,” says Jochen Flasbarth, Germany’s junior environment minister. So on December 3, 2014, the government passed what it called the Climate Action Program 2020, a comprehensive strategy to reduce emissions by around 70 million tons annually by 2020.

Most measures have remained uncontroversial, such as increased spending on energy efficiency and green buildings. But the government’s announcement this spring that it intended to reduce emissions by 22 million tons with the help of a “climate fee” for coal-fired power plants caused an uproar among coal miner unions and large utility companies. The fee would have forced operators to buy extra certificates for their emissions from the European Trading Scheme for CO2 emission allowances, thus making electricity from lignite less profitable.

While environmental organizations hailed the climate fee, trade unions warned of the loss of tens of thousands of jobs in Lausitz, central Germany, and the Rhenian district, where lignite is produced and burned.

“The climate fee will lead to a nationwide end for coal power plants and structural turmoil in the affected regions,” Michael Vassiliadis, head of the miners’ union, IGBCE, has proclaimed at rallies. After a number of miners’ demonstrations, the German government is now giving in to the protests. At a closed-door meeting on July 1, the heads of the governing parties decided to replace the climate fee with an alternative set of measures. The new plan is a total strategic reversal: Instead of making utilities pay more for emitting CO2, the utilities will now actually be paid for downsizing their operations while keeping their power plants operational as a “national capacity reserve.”

The plan aims to eliminate 2.7 gigawatts of lignite production, amounting to 13 percent of Germany’s brown coal capacity — an initiative the government says will avoid 11 million tons of CO2 emissions annually. Additional cuts in lignite production are planned for the future.

“Ultimately, we will deliver the 22 million ton reduction, but at a higher cost,” says Social Democrat leader Sigmar Gabriel, vice chancellor and federal minister for economic affairs and energy. He acknowledges that the cost of this reversal is high: $2.2 billion to $3.3 billion dollars per year, divided fifty-fifty between the federal government and private consumers who have to pay more for their electricity.

Environmental NGOs and economists are highly critical of the new, less stringent emissions reduction plan. “Chancellor Merkel has broken her promise to get serious about decarbonization,” says Tobias Münchmeyer of Greenpeace Germany.

“This will gild the end of lignite power plants, instead of making money available for building storage facilities for surplus wind and solar electricity and power lines for transporting wind energy from coastal regions into the rest of the country,” says Claudia Kemfert, head of the Energy, Transportation, and Environment Department at the German Institute for Economic Research in Berlin.

“What we lack is a strong and clear price signal that emitting CO2 will become more expensive,” says Edenhofer, of the Technical University Berlin, who is in favor of creating a Europe-wide minimum price for emissions that would steadily increase. Revenues from the price on carbon would be used to support the economic modernization of regions that would be affected when coal mines and power plants close, according to Edenhofer. Negotiations have begun in Brussels to reform the European Trading Scheme by 2020, but until then the German government doesn’t expect a price level for CO2 that would help reduce emissions.

Merkel’s government is now keen to emphasize that scrapping the climate fee is not a departure from the Energiewende goals. “This is not about whether we reduce greenhouse gas emissions by 40 percent until 2020, this is merely about how we do it,” says Environment Minister Barbara Hendricks, a Social Democrat. In late June, her ministry convened 200 officials from German states and municipalities to develop a strategy for how to move from a 40 percent reduction in CO2 emissions to the far more ambitious goal of slashing emissions by 90 percent by 2050.

“Our new data show that in 2014, CO2 emissions have dropped again and that’s the way we want to keep going,” says Hendricks.

In Welzow-Süd, miners have reacted with relief to the government’s decision to back off from imposing the climate fee. But the future of this mining area is still very uncertain. Vattenfall, the Swedish company that owns the operations in Welzow-Süd, is offering its Lausitz lignite reserves and power plants for sale, triggered by an order from the Swedish government to reduce the company’s overall CO2 emissions.

The overall share of coal in German electricity production has shrunk from 56 percent in 1990 to 43 percent in 2014. During the same period, the share of renewables in electricity production has soared from 4 percent to 26 percent, with no end in sight for that growth. If these trends continue, inexpensive wind energy will make coal operations less and less profitable.

But Wittig, the tour guide, is confident that the end of German coal is not in sight. She led her tour group down to the flöz, the black bottom of the Welzow-Süd opencast mine, where the remnants of swamps and bogs from 17 million years ago are being dug up. The excavating equipment here is so large that workers operating them look like ants. Wittig described how this mine alone sends 36,000 tons of coal per day to nearby power plants. The Welzow-Süd mines hold “enough coal for the rest of the century,” she said proudly.

Christian Schwägerl is a Berlin-based journalist who writes for GEO magazine, the German newspaper Frankfurter Allgemeine, and other media outlets.