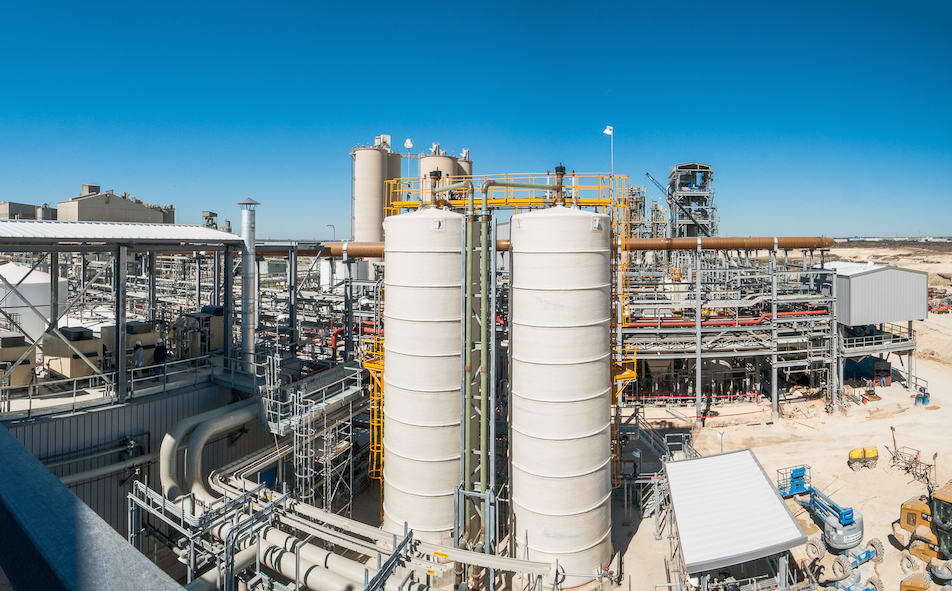 Cement plants are infamously dirty. Particulates, dust, and ozone-forming chemicals are standard. There are airborne metals like lead and mercury. Some, like a team of cement kilns shut down after a decades-long fight in North Texas, may even burn hazardous waste as fuel, raising more public-health concerns. But there’s another pollution stream that often goes overlooked: planet-warming greenhouse gases.

Nationally, cement production is second only to iron and steel production in greenhouse emissions produced by the industrial sector. (The largest contributors are the energy and transportation sectors.) Since 1990, greenhouse emissions from cement production have risen 9 percent, from 33.3 million metric tons per year to 36.1 million metric tons per year, according the U.S. Environmental Protection Agency’s report, “Inventory of U.S. Greenhouse Gas Emissions and Sinks: 1990–2013.”

However, a coal-fired San Antonio cement plant is now a testing ground for a technology that could soon be transforming those voluminous emissions into mountains of innocuous baking soda and other industrial products. If it proves out, the Austin-based Skyonic’s transformative “SkyMine” technology could soon be shrinking the carbon footprints of much larger polluters, such as oil refineries and coal- and gas-fired power plants.

“We make greenhouse gases good for the environment,” is the bold claim on Skyonic’s website.

With the backing of the U.S. Department of Energy and an assortment of private interests, Skyonic brought their $125-million carbon-capture facility online in late 2014 at Capital Aggregates’ Capital Cement Plant in northeast San Antonio. Since putting a demonstration model through the paces at Texas coal plants and at Capital Cement, the company now hopes to begin capturing 15 percent of Capital’s annual 486,686 metric tons of carbon dioxide emissions – roughly 75,000 metric tons – converting them into baking soda, bleach and hydrochloric acid. Carbon dioxide – CO2 – is the principal greenhouse gas produced by human activities.

The full beneficial impact of the facility goes beyond the on-site conversions, said Skyonic spokesperson Stacy MacDiarmid, responding to TCN’s questions by email. “There’s a ‘carbonomics’ where you displace carbon intensive products in the marketplace. So overall the net carbon impact of the plant is about 300,000 tons CO2.”

Interest in carbon capture has grown significantly in recent years as the power sector in Texas and elsewhere – responsible for nearly a third of all greenhouse-gas emissions nationally – races to meet tightening federal standards.

Interest in Texas dates back to the ’80s, when a Lubbock-based power plant began collecting a portion of its CO2 stream for use by regional oil and gas companies to help stimulate flagging oil wells by injecting the chemical compound underground for a process called “enhanced oil recovery” (EOR). Efficiency of the carbon-capture process used at the Lubbock Power and Light plant has improved in recent years, notably at the WA Parish coal plant outside Houston. That process uses chemical relatives of ammonia called amines. However, Skyonic maintains their new approach would be an improvement over traditional amine stripping.

Still, industrial-scale carbon capture has so far had its share of false starts and few commercial successes.

Earlier this year, the DOE yanked $1 billion in pledged funding for a collaborative FutureGen “clean coal” plant under development in Illinois in a federal partnership with a variety of coal interests. FutureGen’s plan to capture and quarantine its CO2 waste stream beneath deep subterranean rock formations is the most common approach taken in the evolving carbon-capture world.

Summit Power Group’s $1.7-billion Texas Clean Energy Project (TCEP), a similar coal gasification plant now struggling to sort out its finances and break ground in West Texas, would commercialize its CO2 stream by selling it into the oil fields for EOR. (According to Bloomberg, Summit expects to close a financing deal with the Export-Import Bank of China before the DOE’s Sept. 30 deadline.)

In its commercial ambitions, SkyMine is more TCEP than FutureGen. With a twist.

“The Capital SkyMine facility is the first step in our vision to mitigate the effects of industrial pollution and close the carbon cycle,” Skyonic CEO and founder Joe Jones said in a prepared release when the plant went online in October. But SkyMine, he added, “is more than a green technology – it’s a smart business decision that makes money.”

Skyonic officials expect to generate $48 million in annual revenue from converting a slice of Capital Cement’s waste stream to the creation of baking soda, hydrochloric acid (HCl) and bleach. Hydrochloric acid is used by the polyvinyl chloride industry and increasingly in hydraulic fracturing, or “fracking,” activities for oil and gas recovery around the country. A hydrochloric-acid leak in Oklahoma a year ago is believed by a commissioner at the Oklahoma Department for Environmental Quality to be one of the largest fracking-related spills in the country, an event that made future development of a swathe of one farmer’s field “impossible,” according to the landowner’s attorney.

According to the U.S. EPA, Capital Aggregates released 2,761 pounds of ammonia in 2013 and 17 pounds of lead and mercury compounds. Additionally, its Texas Commission on Environmental Quality air permit allows the plant to release roughly 2,900 tons of nitrogen oxides, 670 tons of volatile organic compounds and 500 tons of particulate matter per year.

And while this will be good for cleaning up San Antonio skies  – already falling out of compliance with EPA’s existing clean-air standard for ground-level ozone, which is expected to be further tightened in the coming years –  there are skeptics in the environmental community regarding Skyonic’s efforts to reduce the impacts of heavy industry and polluting power sources.

“First of all, it still encourages large-scale coal mining and all the strip mining and digging and all the transportation of that coal,” said Neil Carman, the state Sierra Club’s clean air director. “Sierra Club does not support carbon capture at coal plants because [coal power] is already an expensive old technology. Wind and solar are becoming cheaper and cheaper. That’s where the growth is in terms of clean technology, clean energy.”

Faced with low natural gas prices and the expansion of solar power, coal plants have been mothballed across the nation. San Antonio’s publicly owned utility, CPS Energy, decided in 2012 to shutter its oldest coal plant by 2018 rather than invest in expensive pollution-reducing scrubbers. To make up for that lost power, CPS purchased a natural gas plant and struck a deal for the development of 400 megawatts of sun power from OCI Solar.

Yet Skyonic’s SkyMine hasn’t only captured the interest of the DOE. Private investors have ponied up $75 million for the development of SkyMine, and energy companies like ConocoPhillips, BP, and Luminant have supplied $9 million in startup cash, according to Bloomberg.

Expect to see some significant payback for that investment in the months ahead. MacDiarmid told Texas Climate News the company already anticipates announcing “a number” of international projects by the end of the year.

Skyonic’s dependency on global market demand for its products may eventually limit their model of carbon capture. Every ton of CO2 generates an average of two tons of baking soda. And although the baking soda market is seeing stable growth of about 4 percent per year, according to a recent report, it’s a small amount compared to the amount of CO2 being emitted globally, Victor K. Der, an adviser to carbon-capture advocates at the nonprofit Global CSS Institute, told The New York Times last year.

MacDiarmid said the Capital plant – and future projects now being negotiated – have solid business plans behind them.

“We have contracts in place to sell everything we produce at Capitol SkyMine,” she said, “and have done a lot of market research into the current and expected markets for carbonates and HCl to justify additional projects.”