Texas in sync with rest of nation on climate issues, Yale study finds

To listen to popular Texas politicians – Gov. Greg Abbott and U.S. Sen. Ted Cruz, for instance – you might easily get the idea most Texans are as skeptical as they are about human-caused global warming and hostile to pollution-cutting regulatory measures to address it.

That’s not the Texas portrayed in a new opinion-mapping tool released on Monday by the Yale Project on Climate Change Communication, with attitudes on climate questions at the national, state and county levels estimated on the basis of more than 13,000 survey responses since 2008.

The results show Texans are generally in line with national opinion averages on climate, not largely the fossil-fuel-hugging contrarians about climate concerns that some might assume: They overwhelming agree, for example, that global warming is happening, worry that it will harm future generations and support regulation to stem it, the Yale study concluded.

Any expectation of geographically uniform Texas opinions on all climate issues will likewise be confounded by the Yale maps, such as this one illustrating the estimated percentage of adults who are worried about global warming. 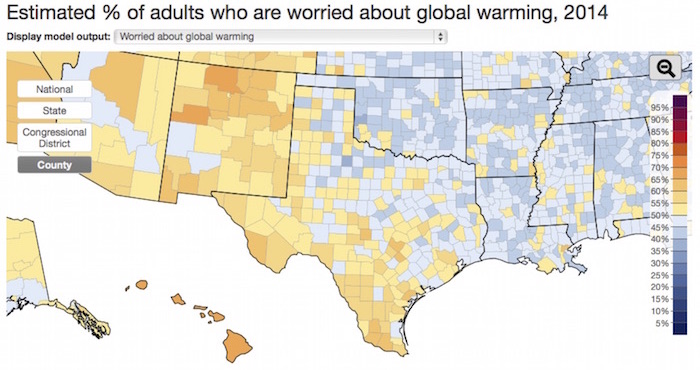 Another Yale map shows that residents of all Texas counties favor regulating climate-altering carbon dioxide as a pollutant – the central proposition behind rules proposed by the Obama administration that Texas officials vigorously oppose. 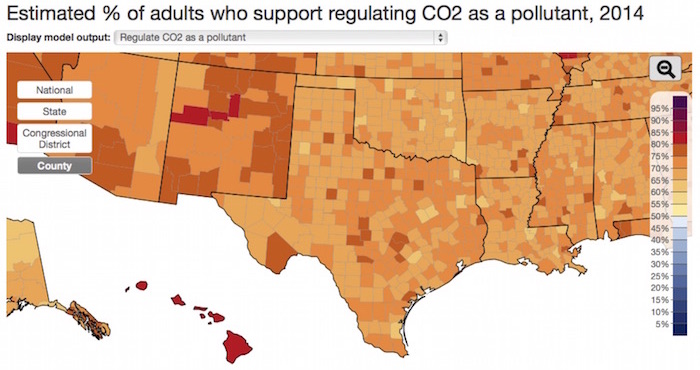 The Yale mapping tool reveals Texans and residents of Harris County – often described as the capital of the nation’s oil and gas industry – are basically in sync with national averages on key questions of belief, risk perception and policy with regard to climate change.

Regulate CO2 as a pollutant

The Yale Project on Climate Communication, a project of the university’s School of Forestry & Environmental Studies, offered this background on the mapping tool:

The estimates contained in the tool are based on a geographic and statistical model developed by our research team at Yale and Utah State University. The model uses the large quantity of national survey data that we have collected over the years — over 13,000 individual survey responses since 2008 — to estimate differences in opinion between geographic and demographic groupings. As a result, we are able to provide high-resolution estimates of public climate change understanding, risk perceptions, and policy support in all 50 states, 435 Congressional districts, and 3,000+ counties across the United States. We validated the model estimates with a variety of techniques, including independent state and city-level surveys. Our independent survey validation tests found that the estimates are accurate within +/- 3 percentage points at the state level, and +/- 6 percentage points at the city level. The accuracy of the model estimates is higher for geographic areas with larger populations.

We undertook this project because most of the action to reduce greenhouse gas emissions and prepare for climate impacts is happening at the state and local levels of American society. Yet elected officials, the media, advocates, and educators currently know little about public climate change opinion at these sub-national levels. State and local surveys are costly and time intensive, and as a result most public opinion polling is only done at the national level. The estimates from our model provide a new way to understand and visualize the geographic diversity in public opinion across the country; something that is not feasible using standard survey techniques.