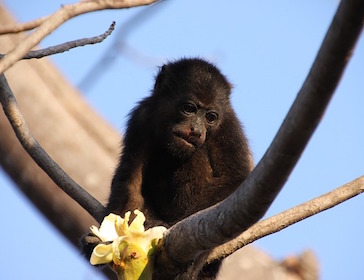 Howler monkeys are infected with parasites once limited to species hunted out of existence in parts of Costa Rica.

Disease emergencies such as the eruption of Ebola in West Africa or the spread of West Nile virus in North America may be a consequence of climate change − and could become more frequent as the world warms, according to scientists.

That is because the change in climate conditions means that the insects that transmit diseases, and the animal hosts that serve as a natural reservoir of infection, can spread to new territories.

But, the scientists argue, the issue is wider than that. Ease of travel, the international traffic of large volumes of crops and animal products, and increasing human disruption of ecosystems are all factors in the spread of what they call emerging infectious diseases (EID).

And there could be yet another factor: humans haven’t completely appreciated just how opportunistic parasites and other agents of disease can be.

Zoologists Daniel Brooks of the University of Nebraska-Lincoln and Eric Hoberg of the U.S. National Parasite Collection, argue in the Philosophical Transactions of the Royal Society that changes in climate will mean changes in habitat. And changes in habitat will mean that animals are exposed to new pathogens – anything that causes a disease – and parasites.

It follows that humans will increasingly be exposed to epidemics of new diseases never encountered before on such a scale. But it will not, Brooks says, be like the plot of the 1971 science fiction movie, [The Andromeda Strain], about a single deadly global infection.

“There are going to be a lot of localized outbreaks putting pressure on medical and veterinary health systems,” he says. “It will be the death of a thousand cuts.”

Infectious microbes evolved to survive in a natural host, occasionally spreading to a new host. The assumption has been that because evolution is a gradual process, new host infections would be rare. But microbes have turned out to be much more resourceful.

When humans hunted capuchin and spider monkeys out of existence in Costa Rica, their parasites switched promptly to the local howler monkeys.

In the Canadian Arctic, as temperature patterns changed, lungworms have moved northward and switched hosts from caribou to musk oxen.

The implication is that pathogens are more versatile and opportunistic than anyone had predicted. In which case, humans are likely to see more emerging infectious diseases as conditions change.

The two scientists propose a “fundamental conceptual shift” in thinking about disease.

“Even though a parasite might have a very specialized relationship with one particular host in one particular place, there are other hosts that may be as susceptible,” Brooks says.

Resistance could evolve too, but this would then mean that the pathogen became a chronic disease problem, rather than an acute one.

So public health chiefs and veterinary scientists will be called upon to co-operate in increasingly unexpected circumstances, especially as climate change begins to alter the ground rules.

“Paleontological studies suggest that species with large geographical ranges and with high ability to disperse are most successful at surviving large-scale environmental perturbation and mass extinctions,” the two authors conclude.

“Thus, the species most successful at surviving global climate changes will be the primary sources of emerging infectious diseases (EID), so host extinction will not limit the risk of EID.

“The planet is thus an evolutionary and ecological minefield of EID through which millions of people, their crops and their livestock wander daily.”