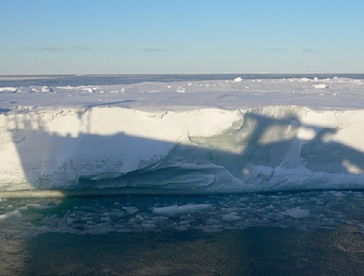 The shadow of a ship passing through the Arctic’s fabled Northwest Passage.

As Arctic sea ice continues to melt at an alarming rate, maritime traffic is set to increase − and with it the pollution emitted by ships’ engines.

A paper published by the International Council on Clean Transportation (ICCT) says emissions of pollutants from vessels in the U.S. area of the high Arctic could increase by between 150 percent and 600 percent by 2025.

Ships typically burn bunker fuel with a high sulphur content. As well as various greenhouse gases (GHGs), the engines also emit soot, or black carbon. And when this covers snow and ice, it reduces their ability to reflect sunlight away from the Earth, and so raises temperatures.

Without new pollution controls, it is estimated that global soot emissions from shipping may more than quintuple from 2004 to 2050, to a total of more than 744,000 tons, because of increased shipping demand.

A growing share of those emissions will occur in the Arctic, because of vessels being diverted to the much shorter Northwest Passage and Northeast Passage to cut the length of voyages.

Earlier studies of increased shipping in the Arctic concentrated on infrastructure needs and estimates of shipping growth, based on potential oil and gas exploration and other development, but did not address air pollution or its effects.

The paper says: “The potential increases in vessel activity associated with oil and gas exploration . . . would increase emissions from vessels beyond those estimated in this paper.”

It also says that a change to higher quality low-sulphur fuel would cut pollution significantly.

“The lack of regional restrictions in the Arctic leaves the area vulnerable to increasing emissions from international traffic . . .”

Mark Jacobson, professor of civil and environmental engineering at Stanford University, advised as long ago as 2011 that controlling soot could reduce warming in the Arctic by about 2 degrees C (3.6 degrees F) within 15 years.

“That would virtually erase all of the warming that has occurred in the Arctic during the last 100 years,” he said. “No other measure could have such an immediate effect.”

He said soot emissions were second only to carbon dioxide in promoting global warming, accounting for about 17 percent of the extra heat. But its contribution could be cut by 90 percent in five to 10 years with aggressive national and international policies.

The International Maritime Organisation (IMO], a U.N. body, said in the final report of its GHG Study 2014 that, by 2050, emissions of NOX could increase globally by as much as 300 percent, and PM by 280 percent.

The IMO has two sets of emission and fuel quality requirements, one for global shipping and the other a more stringent set of rules for ships in Emission Control Areas.

The global requirements include a limit on marine bunker fuel sulphur content, which is currently 3.5 percent, compared with an actual global average of 2.7 percent. This limit is due to be cut to 0.5 percent in 2020, although parts of the shipping industry are urging the IMO to delay the reduction until at least 2025.

International regulations do not directly restrict the emission of soot from vessels, although it is generally understood that improving fuel quality also controls soot.

The ICCT paper says that, combined with the potential increases in marine emissions, “the current lack of regional environmental requirements for vessels transiting and operating in the U.S. Arctic may lead to an increasing impact on human health for Arctic communities and for the global climate.

“Additional emissions of climate-forcing pollutants such as black carbon and carbon dioxide, combined with emissions of PM and NOX, which can be linked with respiratory health issues, may place additional stress on the Arctic environment and Arctic communities.

“The lack of regional restrictions in the Arctic leaves the area vulnerable to increasing emissions from international traffic that is less tightly regulated than under U.S. law.”

There have also been calls to find alternatives to the many diesel generators currently in use throughout Arctic communities, and which are known to produce large amounts of greenhouse gases and soot.