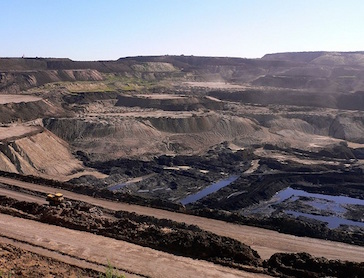 A vast open-pit coal mine in China

LIMA, Peru − This really does appear to be a good news story about climate change − and even the not-so-good qualification that accompanies it still leaves something to celebrate.

Researchers say the post-2020 plans announced recently by China and the U.S. and the European Union mean projected warming during this century is likely to be less than expected. The downside is that, even then, the world will still not be doing enough to limit the increase in average temperatures to below 2 degrees Celsius (3.6 degrees Fahrenheit).

The research, released at the U.N. climate change conference recently held in Lima, comes from the Climate Action Tracker, an independent, science-based assessment that tracks countries’ emission commitments and actions. It comes in the form of an assessment by four organiations: Climate Analytics, Ecofys, NewClimate Institute and the Potsdam Institute for Climate Impact Research.

Together, the four groups measured government pledges and actions against what will be needed to limit warming below the agreed international goal of a maximum 2 degrees C increase above pre-industrial temperature levels, and against the goal of bringing warming below 1.5 degrees C by 2100.

China − which recently announced a cap on coal consumption from 2020 − and the U.S. and E.U. together contribute around 53 percent of global emissions. If they fully implement their new, post-2020 plans, they would limit global temperature rise to around 3 degrees C by 2100, which is between 0.2 degrees C and 0.4 degrees C lower than it would have been.

Their plans are more ambitious than earlier commitments, and represent what the researchers call “significant progress“. But they won’t limit warming to below 2 degrees C.

“In the context of increasing momentum towards a global agreement to be adopted in Paris in 2015, this represents a very important first step towards what is needed,” said Bill Hare, executive director of Climate Analytics.

“Tempering this optimism is the large gap that remains between the policies that governments have put in place that will lead to warming of 3.9 degree C by 2100, compared to the improvements they’ve made in their promises. These new developments indicate an increasing political will to meet the long-term goals.”

Niklas Höhne, founding partner of the NewClimate Institute, said: “We estimate that China will likely achieve its 2020 pledge and the objectives stated for 2030, reaching 20 degrees share of non-fossil fuels in a manner that is consistent with peaking CO2 emissions by 2030. Leveling emissions off after 2030 has a major positive effect on global warming in the 21st century.

Höhne said that the U.S., with full implementation of its proposed policies, appears likely to meet its 2020 goal of 17 percent. But further measures would be needed to meet its newly-proposed 2025 goals.

The researchers say the E.U.’s current policies put it on a good trajectory towards meeting its 2020 target. But, with current policies, it is not on track to meet its more ambitious conditional target of a 30 percent emissions reduction below 1990 levels by 2020, and the 40 percent reduction target by 2030.

They say that governments in countries such as India could do more. Recent discussions indicate that India could be considering putting forward next month a peak year for emissions between 2035 and 2050, which − depending on the level at which this peak occurred − could be consistent with a 2 degrees C pathway.

“We only have a very limited amount of carbon that can be burned by 2050, and we calculate that current policies would exceed this budget by over 60 percent by that time,” Hare said. “We clearly have a lot of work to do.”