UT Energy Poll: The younger the voters, the more support for climate action 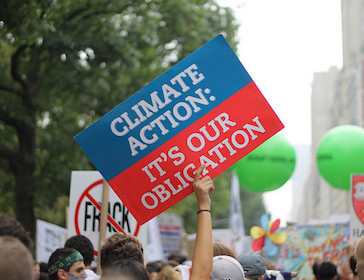 A few of the 400,000 people who gathered for the People's Climate March in New York City, September 2014

Are the chances for more action to reduce climate-disrupting pollution growing as younger generations replace older ones in the electorate?

If so, is one reason that younger voters are more concerned that they and their children will experience the projected impacts of climate change in decades ahead?

Findings in the latest edition of the twice-yearly University of Texas Energy Poll suggest such questions.

The youngest voters are much more likely than the oldest to back candidates who support measures to attack climate change, according to the poll results.

On most climate-related issues, each age group also registered more support than the next-oldest group for explicitly reducing climate-altering carbon emissions and for actions implicitly tied to that goal.

In the poll, released last week, respondents across the country were asked whether they would be more likely to vote for a candidate who supports reducing carbon emissions, imposing a carbon tax, expanding financial incentives for renewables, decreasing use of coal (the most carbon-intensive fossil fuel), and requiring utilities to obtain a certain amount of electricity for renewables.

In the lone exception, support for a mandatory percentage of electricity from renewables generally fell with increasing age, but did rise slightly among 65-and-older voters compared to the 55-64 group.

(The UT poll is not the only recent survey discovering a dramatic age-related difference on a highly contentious issue, in which support for controversial policy action declines with greater age. On the question of same-sex marriage, for example, Gallup reported in May that its latest poll found continuing “support for marriage equality is higher among younger Americans; the older an American is, the less likely he or she is to support marriage for same-sex couples. Currently, adults between the ages of 18 and 29 are nearly twice as likely to support marriage equality as adults aged of 65 and older.”)

The authors of the UT poll, developed by the university’s McCombs School of Business and conducted since 2012, noted that this “generational divide” was widely evident in several areas, such as acceptance of higher prices for environmental benefits:

“Fifty six percent of younger consumers say they are willing to pay much higher prices to protect the environment, compared with only 20 percent of respondents age 65 and older.”

Agreement that climate change is occurring has remained at similarly high levels since the first UT Energy Poll in March 2012. 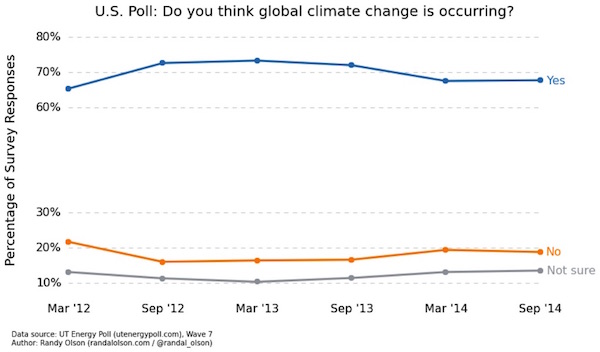 In line with other national polls, the UT poll also revealed a substantial gap between the high levels of agreement that climate change is occurring among Democrats, Independents and Libertarians, compared to the 49 percent of Republicans who agree. 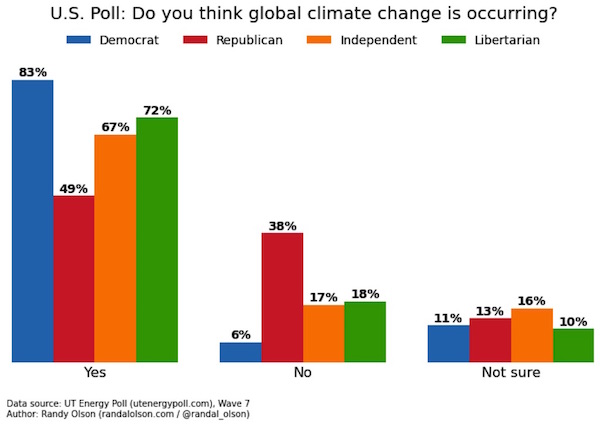 Opponents of strong action to reduce greenhouse gases causing global warming include some states’ top elected officials (including those in Texas), many political conservatives among the public at large, and some leaders of fossil-fuel companies and other businesses.

Notwithstanding such often-fierce dissent, the UT poll’s finding of general support for action against climate change is consistent with the results of other recent national polls.

The latest UT Energy Poll was conducted from Sept. 4-16, with data from 2,105 respondents weighted to reflect the U.S. population. The survey effort was launched “to help inform national discussion, business planning and policy development.”