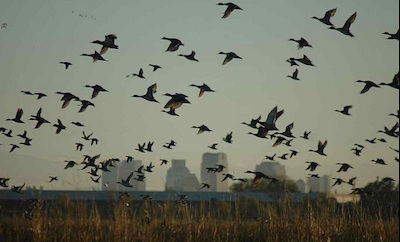 Researchers propose yet another way to reduce greenhouse gas emissions, and at the same time prevent soil subsidence − by preserving and even restoring the world’s wetlands.

Jaclyn Hatala Matthes, a geographer at Dartmouth College in New Hampshire, reports in the journal Global Change Biology that she and colleagues from California universities measured carbon dioxide and methane from a pasture, a cornfield and a flooded rice paddy, all in the Sacramento-San Joaquin delta in California, which was drained more than a century ago and was settled for agriculture and human habitation.

The researchers found that the drained areas of land were carbon sources − that is, they released carbon dioxide into the atmosphere and added to the greenhouse effect. The flooded region, conversely, turned out to be a carbon sink that took more carbon from the atmosphere than it released.

They also found that the region is literally going down in the world, as soil subsidence rates are almost the highest on the planet.

The picture wasn’t quite perfect: the soggy soils also released methane, which is a greenhouse gas that, molecule for molecule, is 20 times more potent than carbon dioxide. It occurs in much lower concentrations, and is short-lived, staying in the atmosphere for years rather than tens of years. But it does add to global warming.

“However, we do expect that the methane emissions will stabilize over time,” Matthes says. “We’ve seen that emissions tend to increase over the first few years, and that this increase is correlated with an increase in wetland plant growth and spread during this time.”

Researchers have already warned that, in any case, methane emissions are likely to increase as the world warms, with methane-emitting microbes inevitably flourishing in warmer waters. But, overall, there remains a case for preserving or restoring wetlands.

According to the WWF (formerly the World Wildlife Fund), the planet’s freshwater marshes, deltas, swamps, bayous and wetlands are home to 40 percent of all the world’s species and 12 percent of animal species.

Deltas and mangrove swamps also provide an important buffer to protect coasts – and coastal settlements – from storm surges, cyclones and even tsunamis, and their annual value in ecosystem services and as protective zones has been measured in trillions of dollars.

The World Resources Institute calculates that, ultimately, 90% of the ocean’s fish depend on deltas, estuaries and coastal wetlands as nursery and spawning grounds, as well as sources of nutrient. The loss of coastal wetlands has been linked to an increase in oceanic “dead zones”.

So the case for wetland restoration is a strong one, even on climate grounds. It soaks up carbon dioxide, and skillful plant management might, according to Matthes, reduce the methane problem.

“It’s a little bit tricky in ecosystem engineering,” she says “but we are hoping to learn some things about how people might plan wetland vegetation in order to maximise carbon dioxide uptake, but to minimize methane release.”