Oil giant says its profits are assured, despite climate warnings 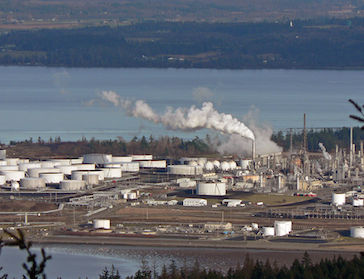 Shell, the world’s largest oil company, believes that governments will not damage its business by taking rapid action on climate change, and says all its oil reserves will be needed and sold at a profit.

In a robust reply to a recent report by the Carbon Tracker Initiative, Shell explains the company reasoning for investing in tar sands and other high cost and difficult-to-extract oil reserves. It says that an ever-expanding global economy, fueled by population growth and great prosperity, will need more and more oil and gas at least until 2050. This will support high prices.

The Carbon Tracker Initiative report, and subsequent research by Friends of the Earth Netherlands, says that many of Shell’s long-term, high-carbon projects in the pipeline will become highly vulnerable to losses or will simply be left in the ground when international law starts to constrain the burning of fossil fuels to limit temperature rises.

But Shell says this will not happen because they do not believe politicians will take action quickly enough to avert global warming. In a long letter to investors, they say they can be assured that the company will continue to make substantial profits out of burning fossil fuels for the foreseeable future.

Shell does acknowledge that the renewables market will expand dramatically, and that natural gas will become an ever more important fuel, but says that will still not be enough to satisfy the growing demand for energy.

The company accepts that climate change is a serious threat that must be tackled, and believes − along with scientists from the Intergovernmental Panel on Climate Change − that the temperature of the planet will rise above the 2-degree-Celsius danger threshold by the end of this century. But it believes that it will take many decades to alter the world’s energy infrastructure to tackle it effectively. Meanwhile the world economy will go on demanding to burn oil and so safeguard the company’s current investments.

The open letter from J.J. Traynor, executive vice president, investor relations, at Royal Dutch Shell, reveals that the company is placing great faith in carbon capture and storage, and is developing projects in Australia, Canada and Scotland.

Many critics believe that carbon capture, while theoretically possible, has limited potential because old oil wells or other potential storage facilities where the carbon dioxide might be pumped are distant from where the fossil fuels are burned. It therefore makes the technology expensive and unlikely to be a major factor in reducing emissions.

Traynor says: “Shell believes that without carbon capture and storage, emission reduction will be more difficult, disruptive to the world economy, standard of living, and cause more economic hardship.” The company does believe that the technology can be made to work, and that is why it is investing in it.

The letter says: “A fundamental transition of the energy system will be needed, but that will take considerably longer than some alarmist interpretations of the unburnable carbon issue would have the public believe.

“Shell is focused on finding real solutions, based on current energy realities, to the widely acknowledged and real threat of climate change.

“The sheer size and scale of the energy system mean that demand for hydrocarbons is likely to continue for the foreseeable future, and hydrocarbons still make up half the total energy demand in 2050, down from more than 80 percent today but from a larger energy system overall.

“We do not believe that any of our proven reserves will become stranded.”

Milieudefensie (Friends of the Earth Netherlands) claims that Shell’s investments will become highly vulnerable when international law starts to constrain the burning of fossil fuels to limit temperature rises.

“Shell may not decide to take the 2 degrees C limit seriously, but the rest of the world does.”

“Shell’s investments in tar sands are five times more carbon-intense than normal gas, and 80 percent of their fossil fuel reserves are unburnable,” said Geert Ritsema, head of the energy campaign. “Shell may not decide to take the 2-degree-C limit seriously, but the rest of the world does. The Netherlands, the EU, the G8 and the UN have all set this as an official climate objective. And because global reserves of fossil fuels are five times too large, Shell will have to write off the most expensive and most CO2 intensive reserves first.”

Carbon Tracker commented on the oil company’s statement: “Shell does not explain how it is solving the contradiction between the predictions of high oil demand and its acceptance of the need to address climate change. Carbon Tracker argues that high-cost production and growing oil demand assumptions are inconsistent with a more resilient global economy and stable global climate.

“We invite companies and investors to stress-test oil demand scenarios, taking into account expected slowing economic growth in countries like China, more efficient use of oil − particularly in transport − and the substitution effect due to the introduction of cleaner fuels and technologies such as natural gas, biofuels, and electric vehicles.”