Texas and the IPCC’s report on impacts, adaptation and vulnerability 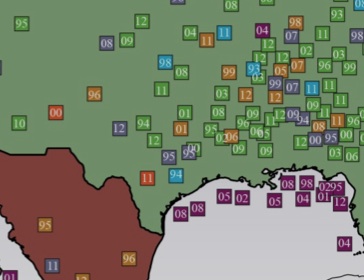 Part of a graphic from the North America chapter of the IPCC’s impacts report shows weather disasters from 1993-2012 with overall losses of more than $1 billion in the U.S. or more than $500 million in Mexico or Canada. The IPCC said “the observed extreme events have not been attributed to anthropogenic climate change, yet they are climate-sensitive sources of impact illustrating vulnerability of exposed systems, particularly if projected future increases in the frequency and/or intensity of such events should materialize.” Brown signifies drought; red, fire; blue, flood; maroon, hurricane; green, severe storm; purple, winter storm.

In a major new report, the world’s leading scientific body on manmade climate change included a variety of Texas-pertinent findings amid a detailed global summary of evidence regarding already-occurring impacts and future risks.

The IPCC’s “Climate Change 2014: Impacts, Adaptation and Vulnerability” is the U.N.-sponsored organization’s first such report since 2007 about the recorded effects of a shifting climate and the opportunities for assessing and dealing with the related risks that experts foresee as that projected trend accelerates due to atmosphere-warming pollution.

The report, which represents the input of more than 2,000 scientific authors and reviewers from dozens of countries, documents the diverse ways that “the effects of climate change are already occurring on all continents and across the oceans” and concludes that “the world, in many cases, is ill-prepared for risks from a changing climate,” the IPCC said.

This IPCC’s latest report on impacts and risks, along with two companion volumes it is issuing in 2013 and 2014, “provide a broad perspective on how climate change will affect the world and all of its major regions,” and much more detail on Texas will be forthcoming in a few weeks in 13 federal agencies’ third National Climate Assessment, said Kathleen Hayhoe, director of the Climate Science Center at Texas Tech University and previously an expert reviewer for the IPCC.

[The IPCC’s third major 2013-14 report – covering ways to limit climate change – was scheduled to be issued April 13. See details below this article.]

However, Hayhoe added in comments emailed to Texas Climate News that “many of the main conclusions of the IPCC reports apply equally to Texas as they do to the rest of the world.”

The report “highlights how climate change is expected to interact with, and in many cases exacerbate, problems we already struggle with today in Texas: water shortages, rising sea levels, coastal storms and hurricanes, heavy rain and flood events, extreme heat,” she said.

“The new report also highlights emerging global issues, such as the relationship between climate variability, change, and political instability,” she added. “Even if these effects aren’t happening in our own backyards, their effect on our economy, our resources, and even (if the U.S. is called to intervene), our lives and those of our children is still very real.”

Camille Parmesan, a biology professor at the University of Texas whose research focuses on the impacts of climate change on wildlife, told TCN that the biggest difference for the state between the IPCC’s last major assessment of impacts, issued in 2007, and the one that was recently released “is that we are now finally starting to see long-term changes in climate” – drier and hotter conditions in West Texas being “the most obvious one” – and wildlife impacts are starting to be recorded such as the “northward movement of tropical species into Texas, and as far up as Austin.”

Documented and projected impacts in the IPCC report for the Southwest and Southeast regions of the U.S. “are going to apply to Texas,” even when the state is not mentioned specifically, added Parmesan, a contributing author for two chapters of the latest IPCC report who served as a lead author and expert reviewer for previous major IPCC assessments.

The American Southwest “already has significant increase in drought events, and currently what we call a ‘drought’ is expected to become the norm (high agreement among climate models) and this will be surpassed by the occasional ‘mega-drought,’” Parmesan wrote in emailed comments for TCN.

“Impacts of drier/hotter extremes are already evident in (1) increases in extent, frequency and intensity of fires [and] (2) large tree-death events from droughts and droughts followed by insect attacks – this combination (droughts that then stress large old trees making it possible for insects – e.g. beetles – to then kill off the tree) caused many of the tree deaths in Central Texas after summer 2011,” she added.

Another example of IPCC findings relevant to Texas, she said, involves oceanic impacts of climate change:

“Sea-level rise, coupled with significant increase in intensity of hurricanes, has also already affected Texas (e.g. [hurricanes] Rita and Katrina), and effects are social as well as physical (e.g. refugees from Katrina pouring into Houston).”

Even so, many Texans may not regard recent events as examples of climate change because of the state’s climatic history, Parmesan added.

“My two cents is that Texans have been sheltered from much of the impacts from recent anthropogenic [manmade] climate change because Texas has historically had very erratic weather and frequent extreme events (winters of alternating ice storms and balmy weather, summers alternating drought and floods, large temperature fluctuations from day to day),” she told TCN.

“Texas agriculture, wildlife and society are adapted to extreme events and changeable weather,” Parmesan added. “This has also made it harder to discern any long-term change – the more fluctuating temperatures and precipitation events are, the more difficult it is to ‘see’ long term gradual change.”

That comment was echoed by Bruce McCarl, a professor of agricultural economics at Texas A&M University who was a lead author of the IPCC report’s “Economics of Adaptation” chapter, when he spoke to a recent workshop on climate change at A&M about his research on adaptation by farmers and ranchers.

McCarl described a meeting of Texas farmers where he spoke about climate change. One member of the audience declared that he and the other farmers didn’t believe what McCarl was telling them, but then added, “What can we do about it?”

Research has found that farmers are responding voluntarily to a changing climate, regardless of whether they accept the sweeping consensus of the scientific community that it is mainly human-caused.

Farmers’ “autonomous” shifts in crop-raising patterns are already occurring, McCarl said, citing studies that found U.S. cultivation of corn and soybeans, on balance, has moved northward and westward. Such direction tends to move a shift toward higher elevations, he added.

“We’ve seen a migration of crop production, entirely autonomously – nobody called them up and said go do this, they did it in their own interest.”

Because generally northward shifts in crop patterns are possible in the U.S., the nation as a whole can maintain production as the climate warms, McCarl said.

But he added that some other nations – and parts of the U.S. – will not be as lucky.

“I did a study in Egypt and I did a study in Mali, and in Egypt and Mali they don’t really have the ability to move crops to the north. In Mali, that takes you right into the Sahara Desert. So they’re probably screwed by climate change. So is Texas. If it gets several degrees warmer here, we’re going to have a heck of a time maintaining productive agriculture. We’ll have a lot more livestock.”

Some of McCarl’s studies were cited in the “Economics of Adaptation” chapter, including a 2013 journal article, “How climate factors influence the spatial distribution of Texas cattle breeds.”

Texas-related research and examples of the climate-change impacts appear a number of other places in the new IPCC report:

The beef plant in question – a Cargill facility in Plainview – is featured in the April 13 premiere episode of a nine-part Showtime documentary series on climate change. Hayhoe of Texas Tech appears in the Cargill segment.

In a university press release about the series, a statement from Hayhoe chimed with the key conclusions of the new IPCC report about climate change’s current impacts:

I hope this program will show us how climate change isn’t just some far-off issue that only matters to our children’s children, the polar bears in the Arctic or to islanders in the South Seas. Climate change is already affecting our lives today right here in the places where we live. It’s changing the birds, bugs and plants we see in our backyards. It’s affecting where we grow our food and how much water we have, altering the shape of our coastlines and increasing the risks of many types of extreme weather.

The IPCC on limiting climate change

An IPCC report covering ways to limit climate change – the third of three major reports the organization is releasing in 2013 and this year – was scheduled to be released on April 13.

According to a leaked draft, Reuters reported Friday that the report would say “a radical shift from fossil fuels to low-carbon energy would slow world economic growth by only a tiny fraction every year.”

Many governments had complained that an earlier draft was not clear in its estimate of the costs of low-carbon energy, which include solar or wind, nuclear and fossil fuels whose greenhouse gas emissions are captured and buried underground.

The Guardian reported that the report would say “clean energy will have to at least treble in output and dominate world energy supplies by 2050 in order to avoid catastrophic climate change.”

The report produced by hundreds of experts and backed by almost 200 world governments, will detail the dramatic transformation required of the entire globe’s power system, including ending centuries of coal, oil and gas supremacy.

Currently fossil fuels provide more than 80 percent of all energy but the urgent need to cut planet-warming carbon emissions means this must fall to as little as a third of present levels in coming decades, according to a leaked draft ….

The first of the IPCC’s major 2013-14 reports, detailing the past several years’ findings on the science of human-caused global warming and climate change, concluded that it is “unequivocal” the climate is warming and that it is “extremely likely” (meaning more than 95 percent certain) that humans have been the main reason for this trend since the mid-20th century.