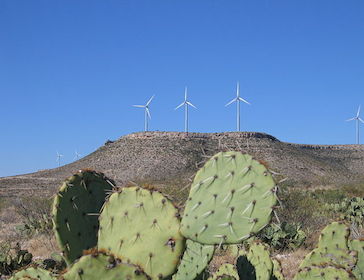 Despite fervent appeals by wind-energy proponents to continue a 21-year-old federal tax credit for wind-generated electricity, Congress let the credit expire at the end of 2013.

Wind proponents predicted “uncertainty” for the wind industry – which produces more power in Texas than any other state – when that happened. This week, a blog post on the website of the American Wind Energy Association called for lawmakers to renew the credit, arguing that its expiration was “creating instability in the wind industry and placing thousands of American jobs at risk.”

Even so, reports of positive developments regarding the wind industry in Texas have hardly been absent from the news media in recent weeks.

The ClimateWire news service, based in Washington, had a particularly detailed and optimistic assessment:

The next big Texas energy boom does not involve tight gas formations in the Barnett Shale, or deepwater oil and gas in the Gulf of Mexico. While fossil resources continue to draw high interest from energy developers and investors in the Lone Star State, Texas’ hottest energy prospect is wind power in West Texas and the Panhandle.

That’s where a new surge of wind farm development, estimated at 7,500 megawatts of new generation over the next three years, should convert once-sleepy places like Amarillo, Plainview and Lubbock into renewable energy boomtowns.

[That projection for new wind generation is more than half of Texas’ existing 12,355 megawatts in installed wind capacity. The state’s power plants of all kinds have more than 75,000 watts in capacity.]

The new wind power surge, while not a surprise to those familiar with the state’s immense wind resource, is coming to fruition thanks to the convergence of several factors. They include the expiration of a key federal tax credit that pushed wind energy developers to launch projects by the end of 2013; an economic recovery and projected population growth that should drive electricity demand higher in Texas by midcentury; and, most immediately, the completion of one of the largest transmission expansions ever conceived for the sole purpose of bringing renewable energy to market.

Critics of wind power, many allied with competing fossil-fuel interests, have often noted that the wind-generated electricity, despite its rapid growth in Texas, still accounts for a small percentage of the state’s increasing power demand and is hazardously intermittent.

ERCOT, the agency that manages the power grid in most of the state, issued a new report late last month that touched on those issues, declaring that that a new analysis reveals Texas’ demand for electricity is not growing as fast as had been projected previously.

The Fort Worth Star-Telegram noted the report’s disclosure that the wind industry’s addition to the state’s power supply may be adjusted upward:

ERCOT also said it might increase wind power’s estimated contribution to the grid. It presently counts only 8.7 percent of installed wind capacity when forecasting how much power will be available at peak usage times. ERCOT said that figure is “conservative,” and new analysis shows that 14 percent of capacity can be expected from the state’s West Texas wind farms, which are the vast majority of installations, and that coastal wind farms could operate at 27 percent “due to the prevailing coastal wind patterns during late summer afternoons.” (Winds in West Texas tend to fall off in those hours.)

Recent reports from around the state, meanwhile, have detailed a variety of wind-power projects that will be or may be undertaken.

On Feb. 27, Austin City Council approved paying $558 million over the next 18 years for 300 megawatts of wind-generated electricity that will come from 160 new wind turbines near Amarillo in West Texas.

“The contract will serve 98,550 homes over the course of 18 years, according to Austin Energy [the city’s publicly-owned utility], KEYE-TV reported.

The Sierra Club’s Texas Green Report blog noted that the purchase means Austin Energy may meet its goal of renewable sources providing 35 percent of the city’s electricity four years ahead of a 2020 target for that to happen.

The cost of the wind is priced in the $26 to $36 per [megawatt-hour] range, which is typically cheaper than the price of electricity generated by gas and almost on par with the cost from the dirty Fayette coal plant [a power plant near LaGrange, owned by Austin Energy and the Lower Colorado River Authority, which is a frequent target of criticism from the Sierra Club and other environmentalists]. And this price is guaranteed over 18 years. And if it breaks, we don’t have to pay for it. So no operations and maintenance required by us ratepayers.

In the “maybe” category, but nonetheless exciting news for economic-development advocates in windy West Texas, was an announcement on Feb. 26 by Tesla Motors, the California-based maker of electric cars, that it would build a “Gigafactory” for batteries, powered by solar and wind energy, in Texas, New Mexico, Arizona or Nevada.

Tesla said the facility is projected to cost $4 billion to $5 billion through 2020, occupy 500 to 1,000 acres and employ about 6,500 people. It will help the company “reach our goal of producing a mass-market electric car in approximately three years,” Tesla said.

Amarillo’s KFDA-TV examined the potential local impact if a site in that region is chosen for the battery plant:

If Tesla does decide to bring part of its business to Texas, local economist Neil Meredith said the Panhandle area could be a contender. “I mean, if they want to use wind energy, this is the place to come in Texas for sure. … We have about 200,000 people in Amarillo. If you increase the number of jobs by 6,500, that’s a roughly three percent increase. That would increase local activity such as restaurants, local retailers, those sorts of things. People have to spend their money somewhere so you would expect that to have a noticeable impact.”

In other recent wind-energy news:

The Amarillo Globe-News reported March 3 that “a powerhouse railroad and a growing wind development company have teamed to make a clearinghouse for wind energy equipment east of Plainview.”

Tri Global Energy announced last week it had signed on to be the project’s first and priority customer to have turbine parts shipped in by rail to the Hale County facility, which will be operated by BNSF Railway’s logistic’s subsidiary. The project will be called the West Texas Wind Energy Logistics Center and will serve Tri Global’s needs and other wind developers as Texas Panhandle wind projects are beginning a flurry of construction now that transmission lines to downstate population centers are complete.

KFDX-TV in Wichita Falls reported that a construction announcement about a new $250-million, 200-megawatt wind farm last month means wind development will be spreading to another Texas area along the Oklahoma border.

Archer, Baylor, Hardeman, Young and several other Texoma counties are speckled with wind turbines as wind farms continue to pop up everywhere.

And now Clay County will soon see some of its landscape housing dozens of wind turbines, as well.

Clay County officials say the Shannon-1 Wind Project will create up to 60 construction jobs and once it is up and running, about eight full-time jobs.