Texas’ long-running drought has eased considerably because of recent rains, but don’t count on that relief continuing through the upcoming months, federal forecasters warned Thursday.

In its annual Winter Outlook for climate conditions across the country, the National Oceanic and Atmospheric Administration said drought will probably make a comeback in Texas and neighboring areas:

Winter is likely to offer little relief to the drought-stricken U.S. Southwest, and drought is likely to develop across parts of the Southeast as below-average precipitation is favored in these areas of the country, according to NOAA’s annual Winter Outlook announced today.

Drought has been an ongoing concern across parts of the Southwest and Texas for nearly three years, and after some relief during the past few months, drought is likely to redevelop during winter.

Sea surface temperatures across the equatorial Pacific have been near average since spring 2012, and forecasters expect that to continue through the winter. This means that neither El Niño nor La Niña is expected to influence the climate during the upcoming winter.

The Winter Outlook projected drier-than-average conditions across roughly the western third of Texas, with even chances or below- and above-average precipitation in the rest of the state: 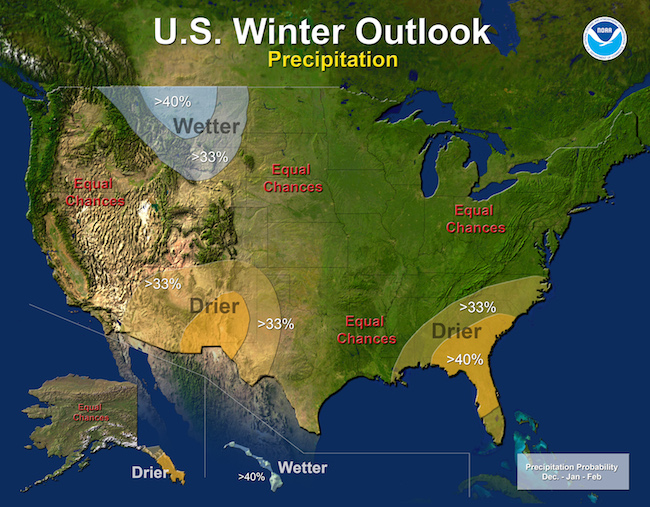 The NOAA report forecast a greater-than-40-percent chance that the 2013-14 winter will be warmer than average in Texas: 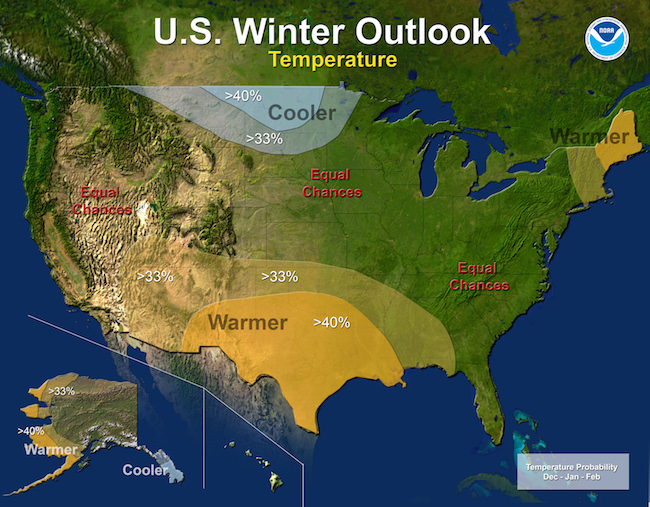 The latest weekly report by the U.S. Drought Monitor continued to document the recent relief that Texas has enjoyed from the statewide drought that started in 2011, when record-setting heat and dry conditions gripped the state.

The Drought Monitor’s latest appraisal showed, for instance, that the portion of the state in none of its four drought categories was about 50 percent this week, down from more than 75 percent a year ago. The area in the worst category – “exceptional drought” – was 0.78 percent, compared to nearly 8 percent at this time in 2012. 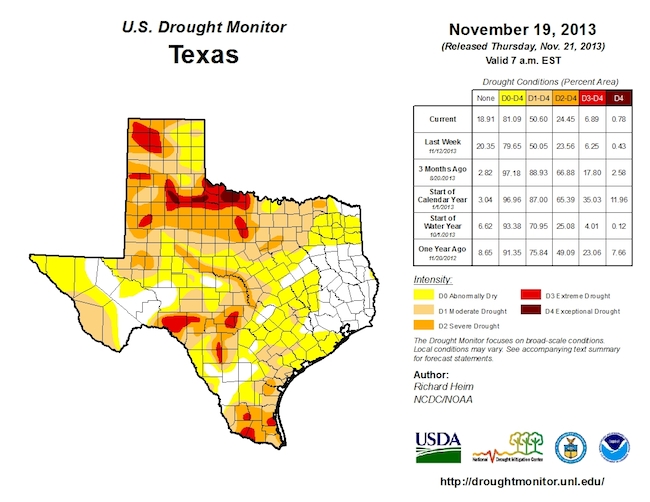 Even with such improvement, however, news reports from different parts of the state continued to document continuing efforts to grapple with the effects of its now-three-year-old drought – a phenomenon that the state climatologist has warned repeatedly could drag on for several more years.

The Houston Chronicle on Wednesday reported the latest development in a situation that has pitted rice farmers against other users of water from the Colorado River:

A Central Texas river authority on Tuesday adopted a drought-related emergency plan that could cut off irrigation water from rice farmers for the third consecutive year.

In the latest round of the state’s fiercest water fight, the Lower Colorado River Authority approved a plan that likely will not allow a single drop to be released in 2014 from two key reservoirs near Austin for downstream growers.

Farmers told the river authority’s governing board during a six-hour hearing in Austin that the plan could bring an end to the rice industry in Colorado, Matagorda and Wharton counties.

But the board, which approved the emergency plan on an 8-7 vote, said the reservoirs, known as the Highland Lakes, need more time to recover from persistent drought. The lakes provide water for more than 1 million people living in and around Austin, as well as industry, recreation-related businesses and farmers.

On Thursday, meanwhile, San Antonio-based Texas Public Radio reported on another battle over water – this one involving the cities of Del Rio and San Antonio and a private water company:

Del Rio is fighting to keep water within its county lines from being shipped to San Antonio, but if a proposed plan goes through, Del Rio Mayor Roberto Fernandez is threatening legal action.

Citizens in the city are concerned that the plan to use 50,000 acre-feet of groundwater per year from Val Verde County will siphon away vital water that flows into its main water source, the San Felipe Springs.

In response to a request for proposals from the San Antonio Water System, the private Val Verde Water Company plans to use groundwater it has acquired from land owners and sell it to San Antonio.

Fernandez said due to the Texas drought, now is not the right time to export water, and said he believes it would have negative effects on endangered species and the environment.

Last week, the Texas Observer reported on the “unprecedented” water restrictions being imposed in Wichita Falls, where the city manager said the ongoing drought is “nothing short of a natural disaster” for the North Texas city:

Folks in Wichita Falls don’t need a reminder that the Great Texas Drought is far from over.

The city of Wichita Falls on [Nov. 12] officially announced unprecedented Stage 4 drought restrictions that ban almost all outdoor watering, ratchet up surcharges for over-consumption and prohibit golf courses from watering with city water, among other rules. The North Texas city joins a list of towns that have run into serious water shortages, including Robert Lee, Spicewood Beach and Barnhart.

The new restrictions were triggered when the city’s two drinking-water lakes—Lake Arrowhead and Lake Kickapoo—fell to a combined 30 percent capacity. The lakes, like most reservoirs west of Interstate 35, have been in steady decline for years as drought’s handmaidens—heat, evaporation and heavy municipal demand—take their toll. Both are at historic lows and it doesn’t appear that the water restrictions so far have arrested the withering-away of the lakes.