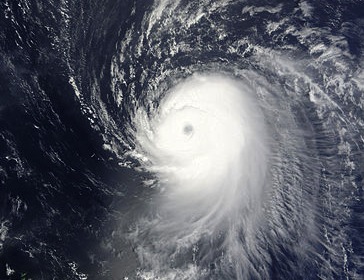 With the approach next month of the fifth anniversary of Hurricane Ike’s devastating landfall in Texas, thoughts and talk will return to the storm’s inundation of Gulf-front Galveston and its interruption of electric power to millions of residents of inland Houston.

But as both a new World Bank study and cautionary comments by a Rice University oceanographer underscored last week, Houston, like Galveston, is also threatened by flooding because of the sea-level rise that scientists say manmade global warming will propel through the century.

The World Bank study, led by a senior economist at the institution and published in the scientific journal Nature Climate Change, projected that among the world’s 136 biggest coastal cities, Houston will have the seventh-largest percentage increase in average annual losses from sea-level rise by 2050. It’s the only U.S. city on a list of the 20 with the largest percentage increases worldwide. 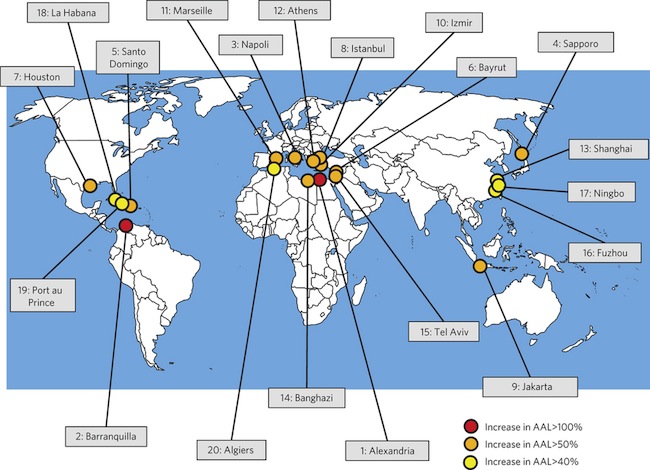 The cover story in the September issue of National Geographic and a recent article in the New York Times put that figure and the term “optimistic” into perspective.

Here’s a pertinent excerpt from “Rising Seas” in National Geographic:

Global warming affects sea level in two ways. About a third of its current rise comes from thermal expansion—from the fact that water grows in volume as it warms. The rest comes from the melting of ice on land. So far it’s been mostly mountain glaciers, but the big concern for the future is the giant ice sheets in Greenland and Antarctica. Six years ago the Intergovernmental Panel on Climate Change (IPCC) issued a report predicting a maximum of 23 inches of sea-level rise by the end of this century. But that report intentionally omitted the possibility that the ice sheets might flow more rapidly into the sea, on the grounds that the physics of that process was poorly understood.

As the IPCC prepares to issue a new report this fall, in which the sea-level forecast is expected to be slightly higher, gaps in ice-sheet science remain. But climate scientists now estimate that Greenland and Antarctica combined have lost on average about 50 cubic miles of ice each year since 1992—roughly 200 billion metric tons of ice annually. Many think sea level will be at least three feet higher than today by 2100. Even that figure might be too low.

“In the last several years we’ve observed accelerated melting of the ice sheets in Greenland and West Antarctica,” says Radley Horton, a research scientist at Columbia University’s Earth Institute in New York City. “The concern is that if the acceleration continues, by the time we get to the end of the 21st century, we could see sea-level rise of as much as six feet globally instead of two to three feet.” Last year an expert panel convened by the National Oceanic and Atmospheric Administration adopted 6.6 feet (two meters) as its highest of four scenarios for 2100. The U.S. Army Corps of Engineers recommends that planners consider a high scenario of five feet.

Last week, the Times had an article with highlights from a leaked draft of the IPCC’s upcoming update on its last big summary of climate science findings in 2007:

Regarding the likely rise in sea level over the coming century, the new report lays out several possibilities. In the most optimistic, the world’s governments would prove far more successful at getting emissions under control than they have been in the recent past, helping to limit the total warming.

In that circumstance, sea level could be expected to rise as little as 10 inches by the end of the century, the report found. That is a bit more than the eight-inch increase in the 20th century, which proved manageable even though it caused severe erosion along the world’s shorelines.

At the other extreme, the report considers a chain of events in which emissions continue to increase at a swift pace. Under those conditions, sea level could be expected to rise at least 21 inches by 2100 and might increase a bit more than three feet, the draft report said.

John Anderson, an oceanography professor at Rice and academic director of the university’s Shell Center for Sustainability, didn’t discuss the World Bank study when he spoke last week at a panel discussion on climate change attended by several hundred people at Houston’s Museum of Fine Arts.

But a central point that Anderson made in his remarks echoed the World Bank researchers’ finding about Houston:

In my opinion, it [sea-level rise] is the strongest manifestation of climate change. Whenever I speak to naysayers about climate change and they question the reality of climate change, I always like to point out that the record is very clear – from tide-gauge records that go back a hundred years or so and from satellite data – that the rate of sea-level rise has increased significantly in the last few centuries.

While Houston was the only U.S. city in the World Bank study’s list of the 20 worldwide with the biggest increases in annual losses related to sea-level rise by mid-century, four U.S. cities were ranked among the 20 with the highest annual flooding costs.

The study estimated that average global flood losses will rise from about $6 billion a year in 2005 to about $52 billion by 2050, simply because of projected socioeconomic changes – an acknowledgement of trends pointing to continued population and economic growth on and near coastlines.

Adding climate change and land subsidence, the researchers projected losses of $1 trillion or more annually without the addition of protective measures to adapt to rising sea level.

Instead of $1 trillion, associated worldwide flooding losses will increase to $60 billion to $63 billion in 2050, even with adaptation that keeps flooding probability constant, they concluded. That’s because of the additional $8 billion to $11 billion in losses from sea-level rise and subsidence added to the $52 billion resulting from socioeconomic changes..

The researchers estimated adaptation measures needed to keep losses at that level would cost $50 billion per year – a lot, to be sure, but still adding up to a total well below their estimated $1 trillion in losses otherwise.

Stephane Hallegatte, the senior economist at the World Bank who led the team conducting the study, emailed comments to New York Times blogger Andrew Revkin about its findings. Some excerpts:

For the first time, this study takes into account existing coastal defenses. And we find that because of these defenses — and the way they have been designed for the current environmental conditions — the cities are very vulnerable to even moderate changes in sea level.

The cities where the risk will increase most are not the cities where the risk is particularly high today (such as around the Mediterranean basin). So, cities where flood risk is not a priority today will have to take this problem seriously. And it is a challenge: one cannot see an increase in risk; what we see is the disaster when it is too late. The challenge for these cities is to do something about the increase in risk before the disaster hit. We know that this is politically difficult.

Adaptation can decrease the probability of a disaster occurring, but all the cities will become more vulnerable to a failure in defenses, or to an exceptional event that exceeds the defense design. It means that floods – when they occur – will be larger in the future.