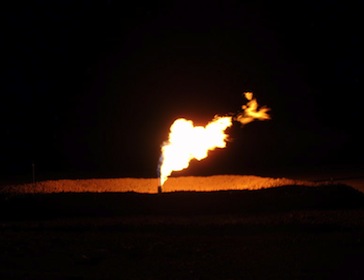 Flaring of gas associated with oil production has long been a contentious issue: it not only releases millions of tons of harmful greenhouse gas into the atmosphere but it’s also a chronic waste of a valuable energy resource.

Considerable progress has been made over recent years in reducing flaring: the World Bank estimates that between 2005 and 2011 there was a 20 percent drop in flaring worldwide. But in North Dakota, one of the pivotal regions driving the boom in U.S. shale oil and gas production, flaring is very much in fashion.

A new report says flaring in North Dakota – now visible from space – has doubled over the past two years, with gas worth approximately $1 billion literally going up in smoke in 2012.

“Over the course of 2012, natural gas flaring in North Dakota emitted 4.5 million metric tons of carbon dioxide, equivalent to the annual emissions of approximately one million cars”, say the report’s authors.

The report, “Flaring Up,” is produced by Ceres, a U.S. organization promoting more sustainable business practices. It says nearly 30 percent of North Dakota gas is at present being burned off each month as a byproduct of oil production: as a result, the U.S. has now joined Russia, Nigeria and Iraq among the world’s top 10 flaring countries

North Dakota, a predominantly farming area and traditionally one of the less developed regions in the U.S., has seen its economic fortunes radically change in recent years.

Technological advances such as directional drilling and hydraulic fracturing – or fracking – have unlocked vast deposits of shale gas and oil in the Bakken area in the state’s north-west. Early last year North Dakota surpassed Alaska to become the second largest oil-producing state in the U.S. – after Texas.

Oil production has multiplied 40 times since 2007, with production rising from 18,500 barrels per day (bpd) to 760,000 bpd. North Dakota’s economy is now growing far faster than anywhere else in the U.S.: the population – and the crime rate – are also on the up.

The report gives two main reasons for the upsurge in flaring. As oil commands a far higher price than gas, companies investing in shale-based energy focus on oil.

“A large differential between the prices for oil and gas acts as a deterrent for developers to invest capital in natural gas utilization,” says the study.

Also, natural gas needs its own infrastructure in order to be collected and put on the market. Gas pipelines and other facilities are undeveloped in North Dakota compared with other gas-producing states.

And North Dakota’s flaring regulations are unusually permissive, says the report, when compared with other resource-rich states such as Texas, California or Alaska.

“In the absence of a strong regulatory framework that prohibits flaring, companies working with a limited amount of capital (which is to say all companies) have a strong incentive to put their capital toward oil production, given its higher return relative to natural gas.”

Some exploration companies, pressured by investors worried about both the environmental and financial impact of flaring, have agreed to limit or stop burning off gas.

A recent rise in natural gas prices might give an incentive to build the necessary infrastructure for capturing gas. Yet the emphasis is still very much on exploiting far more financially attractive oil resources.

The World Bank estimates that flaring around the world accounts for the release of 400 million tons of CO2 each year. The World Petroleum Council says the amount of gas flared annually is worth about $25 billion in energy terms and is equivalent in volume to approximately 5 percent of total global natural gas production.