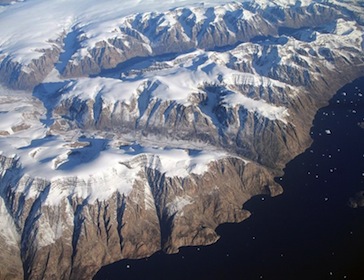 Greenland’s contribution to sea-level rise between now and 2200 is likely to be relatively modest, scientists say. But they couple this with a warning against complacency over the possible consequences of even a fairly small rise.

They say the Greenland ice sheet is expected to increase its contribution to higher sea levels over the next two centuries. But there will be significant changes in the way the island loses ice as glaciers retreat.

Their findings, published in the Journal of Glaciology (“Sensitivity of Greenland ice sheet projections to model formulations,” by Heiko Goelzer et al), suggest that ice melting from the land surface will be the dominant way of raising sea levels. Outlet glaciers, which form an ice shelf once they reach the sea and then discharge into it, are expected to play a smaller part.

The Greenland ice sheet contains enough ice to cause global sea levels to rise by more than seven meters (30 feet), if it were ever to melt completely.

Changes in its total mass happen mainly because of fluctuations in melting and snowfall on its surface, and changes to the number of icebergs released from the glaciers.

Researchers from the Vrije Universiteit Brussel, funded by Ice2sea, a European Union project, wanted to know how both surface melting and iceberg formation will evolve and affect one another.

They used a computer model which projects future ice sheet evolution with high accuracy, and found a way to generalize earlier projections about just four of Greenland’s outlet glaciers.

This let them apply the earlier findings to all calving glaciers around the Greenland ice sheet. Their results indicate a total sea-level contribution from the sheet for an average warming scenario after 100 and 200 years of 7 and 21 centimeters (2.8 and 8.3 inches) respectively.

But the balance between the two processes, melting and calving, will change considerably, so that icebergs may account for only between 6 percent and 18 percent of the total sea-level contribution after 200 years.

This matters, because variations in outlet glacier dynamics have often been suspected of being able to cause very large contributions to sea-level rise.

The glaciers will be less important in future because of their retreat back onto land, and because strongly increasing surface melting, caused by global warming, will remove ice before it can reach the sea edge.

“Sea-level rise is not about the waves chasing us up the beach. It’s about those storm and flood return periods.”

Ice2sea coordinator David Vaughan of the British Antarctic Survey said: “This scenario is no reason to be complacent. The reason the significance of calving glaciers reduces compared to surface melting is that so much ice will be lost in coming decades that many glaciers currently sitting in fjords will retreat inland to where they are no longer affected by warming seas around Greenland.”

Professor Vaughan told the Climate News Network: “The numbers we’ve come up with are roughly comparable to those the Intergovernmental Panel on Climate Change presented in its 2007 report.

“Other researchers have suggested much higher possibilities, based on projections of past changes. The big step forward here is that our work is tied to a specific, rigorous approach to modeling.

“But we can’t afford complacency. Peripheral glaciers – those not directly connected to the ice sheet – and thermal expansion of sea water could easily add up to global sea-level rise of 50 centimeters (19.7 inches) by 2100.

“What’s important there is not so much the rise itself, but the way it alters the return period of big storms and floods.

“If you had a 50 centimeter rise in the Thames estuary, downstream from London, then a storm you’d normally expect once in a thousand years could arrive every century. A rise in sea level to nearer a meter (3.3 feet) would mean you could expect that 1,000-year storm once every ten years.

“Sea-level rise is not about the waves chasing us up the beach. It’s about those storm and flood return periods. And what could happen to the Thames is the same story for many European coastlines.”