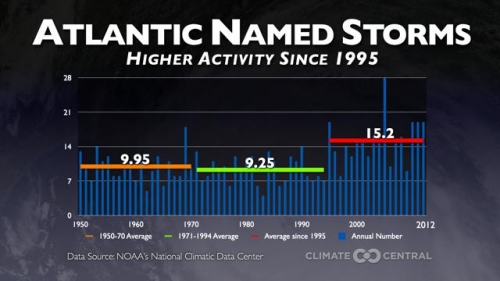 The North Atlantic Ocean Basin has been in a more active period of tropical cyclones since 1995.

Hurricanes are Mother Nature’s largest and most destructive storms. Fed by warm ocean waters and moist atmospheric conditions, about 90 such storms — also known as tropical cyclones — form worldwide each year. With the population of coastal areas growing daily and sea level on the rise, how these monster storms may change as the climate continues to warm is an increasingly urgent question facing climate scientists, insurance companies, and public officials.

A new study by Kerry Emanuel, a prominent hurricane researcher at MIT, found that contrary to previous findings, tropical cyclones are likely to become both stronger and more frequent in the years to come, especially in the western North Pacific, where storms can devastate the heavily populated coastlines of Asian nations. Emanuel’s research showed the same holds true for the North Atlantic, where about 12 percent of the world’s tropical cyclones spin each year.

Emanuel’s study casts doubt on what had been the consensus view of most climate scientists — that in most ocean basins, tropical cyclones are likely to become less frequent as the world warms, but that the storms that do occur are likely to contain stronger winds and heavier rains. That view was expressed most recently in a 2012 report from the U.N. Intergovernmental Panel on Climate Change.

Emanuel’s study, published Monday in the Proceedings of the National Academy of Sciences, uses the latest generation of global climate models to power a series of high-resolution, regional simulations of tropical cyclones around the world.

The study compared the frequency and intensity of tropical cyclones during the period from 1950 to 2005 against projections for the 21st century, from 2006 to 2100, using a scenario in which global emissions of greenhouse gases, such as carbon dioxide, rise rapidly without being significantly curtailed.

Emanuel’s study notes that the relationship between global climate and hurricane activity is “only beginning to be understood.” For example, scientists still don’t understand why 90 tropical cyclones tend to form worldwide each year, and not, say, 125, or 50. Researchers know that tropical storms and hurricanes derive their energy from warm sea-surface temperatures as well as temperature differences between the sea and the overlying, moisture-rich tropical atmosphere, but figuring out how changing background conditions may affect storms in the future is no easy task. In part, this is because although hurricanes can span hundreds of miles in diameter, they still exist at the very limits of computing power for global climate models to accurately simulate. That is particularly the case for such storms’ inner cores, which can be just 20 to 40 miles in diameter and contain the strongest winds.

Emanuel’s study attempts to overcome this problem by embedding high-resolution regional and local models within the broader global modeling framework, which is a frequently-used approach known as “downscaling.” This method — which is akin to constructing a building on top of a preexisting structure, depending on the larger structure for support but being limited by its design — is far from foolproof, and can be prone to mismatches between the underlying calculations used for the global model and the calculations used for the other models. Nevertheless, downscaling is a valuable research tool for hurricane specialists because it can better capture the inner workings of a storm’s core.

In this study, the modeling results showed a significant increase in one key measure of hurricane intensity, known as the “Power Dissipation Index,” which captures both a storm’s windspeed and total lifetime. Power dissipation increased by 45 percent during the 21st century simulations the study found, and there was a 40 percent global increase in major hurricanes, of Category 3 intensity or greater.

Emanuel said the differences between the results from the newer generation of computer models and the older generation may have to do with projected changes in manmade emissions of sulfate aerosols, which recent research suggests may have hindered tropical cyclone activity in the Atlantic Ocean during the 1970s and 1980s.

“We are not yet sure why the same technique, applied to the current generation of global climate models (CMIP5) shows an increase in activity, though I suspect it has more to do with projected decreases in manmade aerosols than with increasing carbon dioxide (emissions),” Emanuel said.

There are, however, two key points of agreement between Emanuel’s new study and the rest of the scientific literature on hurricanes and climate change. The first is that as ocean temperatures continue to increase, the frequency of high intensity hurricanes is projected to increase as well.

“In practice, these events cause most of the damage,” Emanuel said. For example, Hurricanes Katrina, Rita, and Wilma — all of which were major hurricanes according to the Saffir-Simpson Scale — caused nearly $200 billion in damage alone in 2005, which was the most recent year a major hurricane made landfall in the U.S. With global sea levels on the rise due to climate change, major hurricanes will be capable of doing even more harm in the decades to come, battering coastlines with higher storm surges than they have in the past.

Second, virtually all the studies show that tropical cyclones are likely to dump significantly more rainfall in coming years compared to the historical record, and inland flooding is one of the leading causes of hurricane-related deaths and damage.

James Elsner, an atmospheric scientist at Florida State University who was not involved in this study, downplayed the study’s conclusions given the considerable uncertainties involved with using computer models to simulate complex storms such as hurricanes.

“The results from the new Emanuel are provocative, but in my opinion there is little reason to put much weight on them when considering what might happen to tropical cyclone activity during the next 50 to 80 years,” he said in an email to Climate Central. “This kind of predictive risk analysis can be useful, but it would benefit greatly by being grounded in risk metrics computed from observed data.”