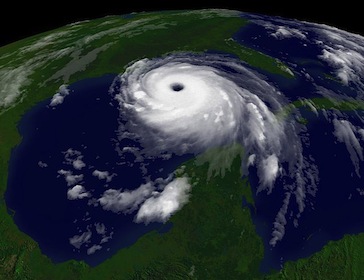 Scientists from Britain’s Meteorological Office have fingered a new suspect in their attempt to solve the mystery of tropical storms. It is, unexpectedly, air quality.

If North Atlantic hurricanes are more destructive or more frequent, it may be linked to lower levels of atmospheric pollution. Conversely, sulphate aerosols and other particles from factory chimneys, vehicle exhausts, domestic fires, power stations and other human economic advances may have played a role in keeping tropical storms under control, at least a little, during the 20th century.

Climate scientist Nick Dunstone and fellow-researchers at the Met Office’s Hadley Centre in Exeter, Devon, report in the Nature Geoscience journal there is at least circumstantial evidence that aerosols play a more significant role in the storm cycle than anyone had expected.

The reason it has been difficult to separate the effect is a simple one: when humans burn fossil fuels, they release greenhouse gases that slowly but inexorably warm the atmosphere, and therefore the oceans. Atmosphere and ocean are together a climate system: put more energy in, and it must go somewhere. The likely consequences, most people have thought, are extremes of wind and rain.

However, for most of the 20th century, humans released greenhouse gases and also all sorts of other waste at the same time: specifically, sulphate aerosols that, as urban smog, darkened buildings, increased the acidity of the falling rain, rotted limestone structures and condemned hundreds of thousands to bronchial illnesses and, ultimately, to early graves.

This started to give scientists and climate modelers a chance to tease out the different effects of the two pollutants. Aerosols are important absorbers of sunlight, and they are also important in cloud chemistry – water vapor droplets have to condense on something. But important in what way? Do clouds reflect sunlight and cool the region? Or do they build up prodigious quantities of moving water and turn into the frenzies of a tropical storm? Or, overall, do sulphates cool the atmosphere a little and counteract global warming − and, if so, under what conditions?

Greenhouse gas emissions gathered pace in the 20th century, and the gases remained in the atmosphere. But anthropogenic aerosol releases varied.

There was a lot of smog and soot before the first world war, then a fall in emissions. Factory exhausts faltered during the great depression of the 1930s, then built up again, but fell away during the second world war, before returning everywhere – and then falling away yet again as governments and voters began to respond to filthy cities and choking smoke.

Using climate simulations, the scientists were able to match storm records and predictions from 1860 to 2050 with recorded and predicted levels of atmospheric pollution, and identify an effect.

Through much of the 20th century, the Nature Geoscience paper suggests, aerosols actually suppressed the hurricane forces by cooling the ocean waters. It was not possible to match specific storms with a particular level of aerosol pollution, but in general there seemed to be less frequent tropical storms during periods of greater aerosol discharge.

The finding is consistent with other recent research. Smog and other discharges in the northern hemisphere in the mid-20th century were recently linked to the parching of the Sahel and the drying-up of much of Lake Chad, along with a weakening of the Indian monsoon.

However, nobody thinks the question is settled by the Met Office findings. What actually happens in a weather system, and how often, depends on many factors. Temperatures and atmospheric pollution are certainly factors, but they are not the only ones. Dust, transported over the oceans in vast clouds, must also play a role. And humans are not the only source of aerosols: volcanoes unpredictably inject huge quantities to almost stratospheric levels.

The link is only an association: as usual, the answer is provided by climate models. There is no way to conduct a controlled, double-blind experiment with an ocean’s weather. Aerosols are implicated only by association. The researchers conclude: “Our results suggest that further progress might be accelerated by an international effort to narrow the uncertainties in aerosol impacts on climate.”