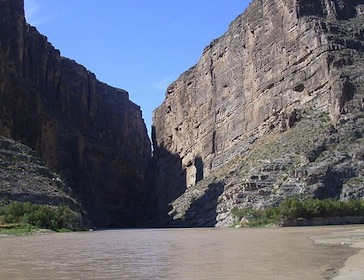 Suing neighbors over water can be expensive.

A paragraph deep in the Texas budget shows that the state has allocated $5 million in fiscal year 2014 for its legal battle to extricate more river water from New Mexico. Texas has already hired a California lawyer to represent it against New Mexico in the case, which the U.S. Supreme Court could decide to hear.

Legal experts said the $5 million figure appears commensurate with the challenges presented by the case, which is called Texas v. New Mexico and Colorado. (Colorado is part of a 1938 water compact between the three states, but the problems lie mainly between Texas and New Mexico.)

“The issues are incredibly complex, particularly from a technical perspective, and the proceeding is an original proceeding in the U.S. Supreme Court, which is a world unto itself,” said Russell Johnson, a lawyer with McGinnis, Lochridge & Kilgore in Austin who specializes in water but is not involved in the case.

The Texas-New Mexico battle concerns the Rio Grande and the compact over the river water created between Texas, New Mexico and Colorado, where the river originates. The compact did not specify how much water each state would get, but it was aimed at ensuring that water flowed into the Elephant Butte reservoir and was properly stored. Additional agreements were made to split the water among Texas and New Mexico. Historically, Texas has been eligible for 43 percent of the water, based on the ratio of irrigated farmland, with New Mexico getting 57 percent.

Texas contends that New Mexico farmers are siphoning off too much water from the Rio Grande as it flows through their state before it gets to Texas. Texas also says the river’s flow has been reduced by wells drilled by New Mexico farmers near the river.

New Mexico’s attorney general, Gary King, fired back that Texas is “trying to rustle New Mexico’s water and is using a lawsuit to extort an agreement that would only benefit Texas while destroying water resources for hundreds of thousands of New Mexicans.” New Mexico says the compact does not specify how much water should flow into Texas.

Texas is also engaged in a separate Rio Grande water battle, as the state tries to extract more water from Mexico.

The state budget from two years ago permitted the attorney general to spend funds on water wrangling with New Mexico. The exact amount was not specified, though Lauren Bean, a spokeswoman for the AG’s office, said none had been spent. However, last August, the Texas Commission on Environmental Quality hired a California-based law firm, Somach, Simmons & Dunn, to advise it on the dispute. Stuart Somach, an attorney with the firm who specializes in water and natural resources issues, is now serving as Texas’ lead attorney on the case.

Drought has exacerbated the tension between the two states. The Rio Grande water collects at Elephant Butte reservoir in northern New Mexico before being sent down the river toward Texas. The reservoir is currently only 7 percent full, and the situation is “quite dire,” the Elephant Butte Irrigation District says. Earlier this month, water began flowing out of the reservoir downstream for seasonal crop irrigation, but farmers in El Paso and elsewhere will not get nearly as much as they are accustomed to.

The battle could drag on for a long time, experts say. The Supreme Court has asked the U.S. solicitor general to weigh in on whether it should take the case. The Supreme Court is much more likely to take a case such as this one — between multiple states and filed directly to the court without prior litigation — than it is to take a regular case. But the court could appoint a “special master” to oversee the fact-finding process. A final resolution in the case could take years, according to a paper from the Utton Transboundary Resources Center at the University of New Mexico’s School of Law.

Asked about the $5 million sum in a recent interview, Carlos Rubinstein, a commissioner with the Texas Commission on Environmental Quality, which represents Texas on the Rio Grande Compact Commission, noted that litigation covers “a highly specialized field” — namely, relating to the multistate water compact. The issues will include “to what degree is groundwater impacting surface flow? What are the damages? What have been the historical damages in the past?” Rubinstein said.

In addition, “you have an impact that is caused by groundwater depletion, simply shutting off the depletion doesn’t correct the situation,” Rubinstein said. “You have to allow the situation to stabilize and that requires years, if not decades. Being able to prove that in court is also highly specialized, and those are expensive things and so a good portion of the money you reference is to cover those experts’ reports that we’re actively preparing.”

In a different water case that is further along before the Supreme Court, the Tarrant Regional Water District hopes to force Oklahoma to allow it to buy more water from the Red River. The Supreme Court heard arguments in that case this spring, and an opinion is expected this month.

The Tarrant Regional Water District has spent $6 million in its years-long lawsuit against Oklahoma, according to water district spokesman Chad Lorance.

This article originally appeared in The Texas Tribune at http://www.texastribune.org/2013/06/12/texas-allocates-5-million-new-mexico-water-lawsuit/. Based in Austin, the Tribune is a non-partisan, non-profit media organization that promotes civic engagement and discourse on public policy, politics, government and other matters of statewide concern.