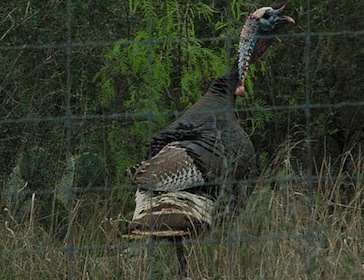 Turkey hunting in Texas dried up along with the state’s water due to the epic drought of 2011. And while the drought has relented, turkey season hasn’t been the same.

Turkey hunters pump $214 million into the Texas economy annually, the largest amount of any state.

Turkey season closed Wednesday in the state, and wildlife officials expect this year will continue a trend the state has seen since 2010, with hunters killing the fewest birds in decades. Turkeys don’t mate when stressed by drought, making them hard to find and triggering a ripple effect that plays out over the next few hunting seasons.

“The drought in 2011 had a significant impact on turkey production,” said Steve Lightfoot, a spokesperson for the Texas Parks and Wildlife Department. The result is that, if this season mimics last year’s, hunters will bag 60 percent fewer long beards – or mature males – than they did before the drought hit.

The Texas turkey season is legendary. Hunters flock to Texas from around the world to nab the state’s coveted long beards, males that are at least 2 years old and have brilliant, hair-like feathers on their chest. This year, wildlife managers and ranch owners said hunters found mostly immature jakes, yearling birds that are less desirable to hunters.

Turkey hunters pump $214 million into the Texas economy annually, the largest amount of any state, according to a U.S. Fish and Wildlife Service analysis of turkey hunting from 2006, the latest available.

Nearly 75 percent of Texas spent a good part of 2011 in “extreme” drought, with more than 25 percent in “exceptional” drought, the highest classification. Conditions improved in 2012, but since October the state has turned dry again, Nielson-Gammon said. Turkey harvests, declining for years, fell off dramatically when the drought struck.

Droughts that last several months can reduce wild turkey flocks by 50 percent, according to the Texas Department of Parks and Wildlife. For birds such as turkeys that nest on the ground, a long drought can destroy mating and nesting spots in addition to robbing them of food. Eggs laid in hot, dry weather often don’t survive. Chicks also become easy picking for predators, and the birds are more susceptible to disease and parasites during a drought.

When hens aren’t eager to mate, the adult males that strut and sing to attract females – called gobblers – give up on mating and focus on finding food. When gobblers aren’t strutting to impress hens, hunters’ fake hen calls are futile.

Other birds, from fellow ground-nesters like the prairie chicken to songbirds to migratory species, are likely feeling the drought, too, said Iliana Peña, conservation director for Audubon Texas. But the effects are hard to quantify.

“We could have an excessive decline on any of those species on, say, fledging young and you wouldn’t necessarily see it for a few years,” she said. “Those impacts can occur and they will occur over the long term.”

Too soon to tell

Birds are adapted short droughts, she added. And while it may be too soon to link any change to the drought now, birders throughout the state could start to notice a difference if the dry spell continues.

There is some good news for turkey hunters. The drought relented in 2012, producing a mini population boom and sowing optimism in hunting circles that turkey populations are on the upswing.

That, added Lightfoot, “should bode well for next year’s outlook.”