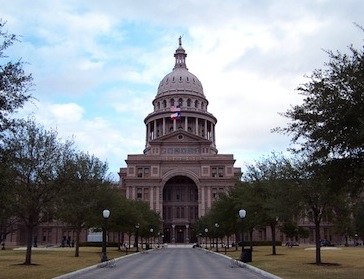 By Chris Hooks
The Texas Tribune

Days after the House voted to strip a 22-year-old reference to climate change from Texas law, a House committee heard testimony on Earth Day about the adverse effects that climate change could bring to the state.

The witnesses, who included scientists, academics and the mayor of San Angelo, largely agreed on the causes and magnitude of climate change, and they advised members of the House International Trade and Intergovernmental Affairs Committee on Monday to speed consideration of how to deal with the results of a warming climate.

One of the first to address the panel was Dr. John Nielsen-Gammon, the Texas state climatologist and a professor at Texas A&M University.

Nielsen-Gammon, who has become one of the most prominent public figures in the state on climate issues, emphasized the settled nature of the science around climate change, and he said there were practical steps the state needed to take to limit potential damage.

“Texans need to adopt a risk-management approach to climate change,” he said, pushing for improved infrastructure and environmental planning to reduce the net effect of environmental shifts. “We can no longer count on the climate staying the way it was.”

He also discussed the current drought, which he said might become the second-worst in the state’s history if it extended into the summer. After an extended drought in the 1950s, he said, Texas took the steps to ensure its water supply was growing faster than population for several decades – but since the 1980s, much of that work has come undone.

“The best thing to do for the drought is to make sure that Texas has a stable water and energy supply,” he said. “And doing so requires at least a consideration of the effects climate change might bring.”

Other witnesses also emphasized the principle of damage and risk mitigation. Dr. Katharine Hayhoe, a director of the Climate Science Center at Texas Tech University, asked legislators to think about the ways society depended on current climate conditions.

“We have built a civilization on the assumption of a stable climate,” she said. “If we were still living in tents, climate change wouldn’t be as big of a problem. But we can’t move Houston 100 feet uphill.”

Some tried to quantify the effects that climate change might have on the state. Dr. Bruce McCarl, a professor of agricultural economics at Texas A&M University, told the committee that some projections estimate Texas might lose up to 30 percent of its arable land, and that the size of the state’s livestock herds might thin by 10 percent. The Edwards Aquifer, he said, a critical source of water for Central Texas, could lose up to 25 percent of its recharge ability.

Others talked about the destabilizing effects climate change could have on international trade. Sherri Goodman, a former deputy undersecretary for defense in the Clinton administration, said that there was a “growing awareness of the impact of climate change on our military operations and on national security.”

“Mexico will be increasingly dry. That will put increasing stress on our international water agreements,” he said. “Secondly, a decrease in agricultural ability in Mexico could lead to an increase in immigration into Texas. Meanwhile, Texas will have to step up its ability to deal with tropical diseases coming across the border.”

Jim Marston of the Environmental Defense Fund urged legislators to listen to scientists and deal openly with the problems posed by climate change.

“Denying what’s going on is really not good policy. We ought to have a debate about some of the things that might happen,” he said.

The hearing came just days after the House voted to strike a provision referring to climate change from Texas Law. House Bill 788, authored by state Rep. Wayne Smith, R-Baytown, attempts to reclaim regulatory powers for the state from the EPA. Currently, the EPA issues permits to industrial facilities that emit large amounts of greenhouse gases.

HB 788, aims to let the state regulate the emission of greenhouse gases. But in the process it strikes five words from the Texas Commission on Environmental Quality’s mandate, which date from 1991. The provision allows the TCEQ to regulate greenhouse gas emissions for the purpose of controlling “climatic changes, including global warming.”

The bill passed 119-23, and now goes to the Senate for consideration. A last-minute effort by state Rep. Chris Turner, D-Grand Prairie, to restore the climate change language fared a little better, but was also defeated 91-50. Turner called the language deletion a needless regression.

“I don’t believe it makes any sense for this Legislature to turn back the clock 22 years and remove references to this topic in Texas law,” he said. “And I think we need we tie our hands if we do not give TCEQ the option of dealing with this issue if circumstances necessitate.”

“You can only send a message if somebody’s listening.” And those listening, he said, are “not the people who need to.”

“There’s a lot of evidence that the 1999 passage of the renewable portfolio standard was not only good for the environment but great for the economy. But in the last eight years its been really tough to replicate that success,” he said. “The disposition of the Texas Legislature seems to be to pin its hopes on the past, and not the future.”

This article originally appeared in The Texas Tribune at http://www.texastribune.org/2013/04/22/panel-airs-climate-testimony-house-strips-global-w/. Based in Austin, the Tribune is a non-partisan, non-profit media organization that promotes civic engagement and discourse on public policy, politics, government and other matters of statewide concern.