TCN reported last December that the opinion pendulum was swinging away from skepticism about climate change, and five national polls released in April and March also reflect that trend. Recent opinion surveys continue to find broad public acceptance of the mainstream scientific view that the climate is changing.

Those new polls revealed majorities taking climate change seriously and favoring responses to mitigate and adapt to it.

There was also some ambiguity, however, in the combined picture that emerged from the surveys regarding views on the seriousness of the threats that climate change poses and what should be done about it.

Here’s an analytical summary of key results in the five recent surveys. Four were conducted in March by Gallup, the University of Texas, Stanford University and the Pew Research Center for People and the Press. The fifth, by partnership of Yale and George Mason universities, was carried out in January.

In the Gallup poll, 54 percent of respondents said they believe global warming has already begun – up from 49 percent in 2011.

Sixty-two percent said – correctly – that most scientists believe global warming is already occurring. The percentage giving that answer has risen steadily in Gallup surveys since 52 percent did so in 2010.

The Yale-George Mason poll surveyed individuals who had identified themselves as Republicans or Republican-leaning independents, 72 percent of whom said hey were “conservative” ideologically while 22 percent said “middle of the road.”

Many polls, starting about five years ago, found increased skepticism about climate change’s reality and the validity of mainstream climate science among right-leaning Americans.

In the new Yale-George Mason poll, however, 52 percent of the Republican and GOP-leaning respondents said they believe climate change is happening, with only 26 percent saying they think it is not.

The Pew survey found that a “sizable partisan gap” continues on climate, with 87 percent of Democrats, 69 percent of independents and 44 percent of Republicans saying there is “solid evidence the earth is warming,” which is the consensus scientific view.

Thirty-nine percent of Republicans told Gallup they think human pollution is mainly responsible for global warming, an increase from 35 percent saying that in 2010. Seventy-eight percent of Democrats saw pollution as the main reason, versus 65 percent in 2010.

Seventy-three percent of respondents told the University of Texas researchers they think climate change is occurring – the same percentage who said that in a September 2012 edition of the same UT Energy Poll. Eighty-two percent of respondents in the Stanford poll said they agree that global temperatures have increased over the last 100 years.

How serious a threat? 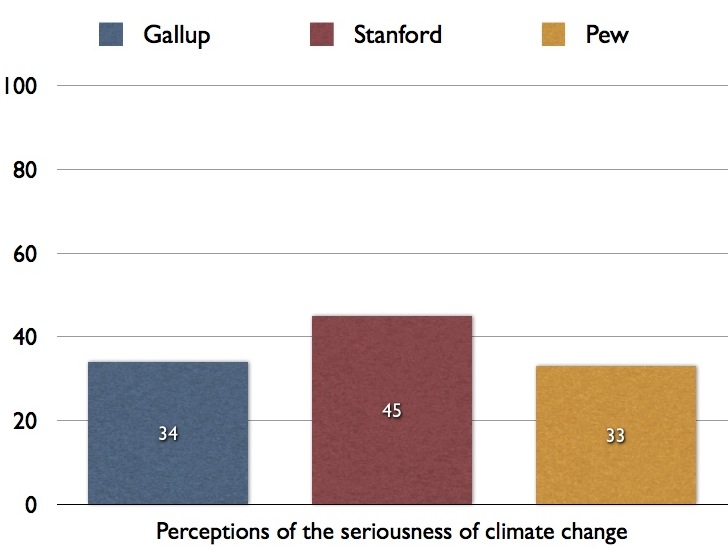 Gallup found that the percentage of respondents saying they worry “a great deal” or “a fair amount” about global warming (as contrasted with worrying “only a little” or “not at all”) has continued to rise since 2011 – from 51 percent then to 58 percent this year.

The percentage of Republicans worrying a great deal or a fair amount jumped from 30 percent to 40 percent over those two years. The portion of independents giving those answers went from 51 percent to 59 percent, but the percentage of Democrats with the higher levels of worry dropped from 79 percent to 75 percent.

Despite greater worry in the population overall, Gallup found that since 2012, smaller portions of respondents in all three political groups expect global warming will “pose a serious threat to you and your way of life in your lifetime.”

In contrast to majority acceptance of global warming as real, Gallup finds Americans less than alarmed. One-third worry ‘a great deal,’ and 34 percent expect it to threaten their way of life. These could be the attitudes that matter most when it comes to Americans’ support for public policies designed to address the issue.

The Stanford survey, focusing on adaptation to climate change, found that 82 percent of respondents view “sea level rise caused by global warming” as a serious problem to one degree or another – 15 percent said “extremely serious,” 30 percent “very,” 32 percent “moderately,” 15 percent “slightly,” and only 7 percent said “not at all” serious.

Pew’s March poll, however, found a lower level of concern about global warming than that organization had recorded in a similar survey last October. The October poll was conducted before Hurricane Sandy struck the U.S. later that month, prompting increased attention to the issue of sea level rise amplified by climate change.

Although renewable energy, especially government support for it, has come in for heavy criticism from some Republican politicians and Republican-favoring groups, the Yale-George Mason survey of Republicans and Republican-leaning independents found more favor for renewables than for fossil fuels.

Seventy-seven percent of respondents told the pollsters that they favor more use of renewables, with 7 percent wanting less use and 8 percent the same amount. Fifty-one percent said they wanted less use of fossil fuels, while 22 percent said more and 19 percent said the same.

Solar and wind power were the most popular energy sources among all respondents in Gallup’s poll, while nuclear power and coal were the least popular.

Gallup asked survey participants whether they wanted “more emphasis” on individual sources. The percentages giving that favorable nod were 76 percent to solar, 71 percent to wind, 65 percent to natural gas, 46 percent to oil, 37 percent to nuclear and 31 percent to coal.

Solar, wind and natural gas earned majority support among all three political groups. Only Republicans gave majority backing to oil and coal, while nuclear earned majority favor from none of the three groups.

Democrats’ and independents’ top choice is solar power, while natural gas places first among Republicans. Republicans and Democrats disagree most on the priority that should be given to oil as a future energy source — with 71 percent of Republicans wanting more emphasis placed on it, compared with 29 percent among Democrats. Republicans are also much more supportive than Democrats of coal (51 percent vs. 21 percent) and nuclear power (49 percent vs. 30 percent).

Climate activists have been trying to boost public opposition to fossil fuels through their opposition to the proposed Keystone XL pipeline, which would bring Canadian tar-sands oil to Texas for refining, and to the gas-and-oil drilling technology called hydraulic fracturing, or fracking, which is especially credited with driving the recent boom in domestic natural gas production.

Two of the recent polls show they’ve achieved only mixed success in those efforts, however.

The Pew poll found broad support for the Keystone project among the public at large and in each of the three key political groups. Among all respondents, 66 percent favored the pipeline and 23 percent opposed. The margins favoring the project were 82-10 among Republicans, 70-21 among independents and 54-34 among Democrats.

Some climate activists oppose fracking in part because of concerns about increased leakage of methane, the main component of natural gas and a potent greenhouse gas, resulting from stepped-up natural gas production, distribution and use. Others who advocate more action against climate change see natural gas as a “bridge fuel,” whose increased use can be helpful in the short term because burning of natural gas produces less greenhouse emissions than other fossil fuels.

Like the debate over the Keystone pipeline, the debate over fracking and increased production of natural gas involves various additional environmental and other issues. Responses in two polls on fracking produced a less-definitive picture than those in the Pew survey on Keystone.

Pew found that 48 percent of all respondents favored more use of fracking, compared to 38 percent in opposition to greater use. Republicans (by 66-24) and independents (51-36) backed more fracking, while Democrats registered 52 percent against and 33 percent in favor. Majorities of all respondents in the Midwest (55-32) and South (52-34) favored more fracking; a majority in the Northeast (46-37) was against, and survey participants in the West were split almost evenly (43 percent for and 44 percent against more fracking).

Stanford’s poll, on the other hand, revealed clear support for preparation in anticipation of higher sea levels propelled by a warming climate. In a report on the poll, an institute at the California university summarized the findings:

[…A]n overwhelming majority of Americans want to prepare in order to minimize the damage likely to be caused by global warming-induced sea-level rise and storms. A majority also want people whose properties and businesses are located in hazard areas – not the government – to foot the bill for this preparation. Specifically, 82 percent of the Americans surveyed said that people and organizations should prepare for the damage likely to be caused by sea level rise and storms, rather than simply deal with the damage after it happens. Among the most popular policy solutions identified in the survey are strengthening building codes for how to build new structures along the coast to minimize damage (favored by 62 percent) and preventing new buildings from being built near the coast (supported by 51 percent).