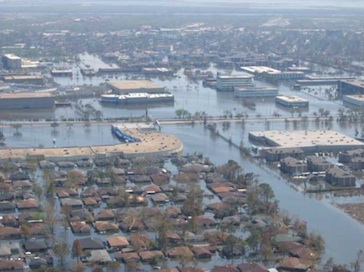 Global warming has already doubled the risk of Hurricane Katrina-magnitude storm surges in the U.S., according to a new study published Monday.

The study, which was published in the journal Proceedings of the National Academy of Sciences, estimates that for every 1.8 degrees F increase in global average surface temperatures, there could be a two-fold to seven-fold increase in the risk of Katrina-magnitude surge events.

The latest climate projections call for the globe to warm by between 3.2 degrees F and 7.2 degrees F by 2100, depending on future greenhouse gas emissions and the precise sensitivity of the climate system to such pollutants.

When Hurricane Katrina struck the shoreline of Mississippi and Louisiana on Aug. 29, 2005, it caused water levels along some parts of the shoreline to rise by 28 feet above the astronomical tide level, flattening communities and contributing to the deaths of more than 2,000. Storm surges — which occur due to hurricanes’ strong winds and low central air pressure — are hurricanes’ greatest killer, a point that was driven home again just last year, when Hurricane Sandy killed at least 72, mainly along the coast of New Jersey and New York.

Technically, Sandy was a post-tropical cyclone at landfall, although its effects were similar to a land-falling hurricane, as it resulted in hurricane-force winds and some of the largest waves ever recorded in New York Harbor.

The new study uses a historical record of storm surge events from six tide gauges located along the U.S. coast, all with data going back to at least 1923. The authors of the study compared the changes in observed surge records to several well-known or theorized influences on tropical cyclones, such as global temperature changes, regional sea surface temperature changes, and sources of natural climate variability such as El Niño and La Niña events.

The study also used the tide gauge data to project changes in the probability of extreme storm surge events. It factored out other influences that could affect the magnitude and damage from storm surges, such as sea level rise, but it also may have captured surge events caused by non-tropical storms, such as Sandy-like hybrid storms or nor’easters.

“An increase in surge activity could also indicate that such types of weather systems are becoming more frequent in a warmer climate,” said lead author Aslak Grinsted, a climate researcher at the Niels Bohr Institute at the University of Copenhagen, in an email conversation.

“Our study shows that extreme (storm) surges become more frequent in a warmer climate, and that the relative change in frequency is much more pronounced for the most extreme events,” Grinsted said. “I think our study is important because it says that coastal adaptation measures should include changes in surge statistics in addition to local sea level rise.”

James Elsner, a professor at Florida State University, who was not involved in the new storm surge study, said it is a valuable contribution to this research area. But he questioned the magnitude of the study’s results, noting that the statistical model the researchers used may have overestimated the level of the storm surge at different future time periods. Nevertheless, Elsner said, “I think it advances the science on hurricanes and climate change by showing a methodology to address future storminess.”

Kerry Emanuel, an atmospheric sciences professor at MIT who also was not involved in the study, said the surge record helps provide another window into tropical cyclone history and how global warming may already be influencing such powerful storms, even though it, like observational records of hurricanes from storm landfall data and aircraft measurements, has some drawbacks, including the way it captures storm surges from both hurricanes and non-tropical storms.

“… The new study does give a kind of ground truth to modelers who are trying to simulate the effects of 20th century climate change on storm surges,” Emanuel said via email.

The new study found that global warming is increasing the risk of large storm surge events by a greater amount, and at a faster rate, than other studies that have used different methods.

Emanuel and other researchers have been using computer models that simulate the physical aspects of the global climate system to examine how hurricanes may change as the climate continues to warm. That is a different approach than the one taken by Grinsted and his colleagues, which relies on a so-called statistical model to test for relationships between various climate-related variables.

Some of the modeling studies have found that global warming is likely to increase the risk of large storm surge events, both because of sea level rise, which will make even weaker hurricanes more damaging, and changes in the strength of the storms themselves.

For example, Emanuel is a co-author of a 2012 study that was published in the journal Nature Climate Change, which found that the combined effects of changes in storm intensity and tracks that may occur as a result of climate change could cause the present-day 100-year surge event in New York to occur once every 3 to 20 years by 2100, and the present day 500-year surge event to occur once every 25 to 240 years. That represents a significant escalation in storm surge risk, the study said.

Hurricane Sandy brought impacts that were actually worse than the 500-year surge event calculated by the 2012 study, since the combination of the storm surge and astronomical high tides caused the peak storm tide during Sandy at The Battery in Lower Manhattan to reach about 4.23 meters above mean sea level. That was about 1 meter higher than the 500-year storm tide calculated for the 2012 study.

And a forthcoming study in the journal of Climate, by a research group based at the Geophysical Fluid Dynamics Laboratory in Princeton, N.J., finds that tropical storms will likely become less frequent but more intense as the climate warms, which is in line with the findings of previous studies. That research, which also relies on computer models that simulate tropical storms and hurricanes in a warming world, found a significant rise in the “lifetime intensity” of tropical storms and hurricanes, and found that hurricanes will produce more rainfall than they do now, on average.

However, using the newest generation of global climate models, the forthcoming study found a smaller increase in the frequency of intense hurricanes, such as Category 4 or Category 5 storms, compared to the results of previous studies.

“Nevertheless, we recognize the much greater importance of Cat 4-5 hurricanes, compared to lower-intensity hurricanes, on damage potential, as reflected in historical studies of damage from hurricanes,” said study co-author Tom Knutson in an email message.

Yet another study, published in the March issue of the journal Climate Dynamics, found that the proportion of Category 4 and 5 hurricanes in all ocean basins has increased at a rate of about 25 to 30 percent per each 1.8 degrees F of global warming, but that this rate of increase may slow considerably as warming continues.

Clearly, the question of how global warming will influence tropical storms and hurricanes, which are nature’s most powerful storms, remains a focus of active scientific research. Using a variety of techniques, scientists are honing in on the most likely scenarios, and the science as a whole points to growing risks for damaging storms along the rapidly-developing U.S. coastline.

Although the studies differ in the details, their main message is consistent: As time goes on, the risk of damaging storms, with potentially devastating storm surges, is increasing.