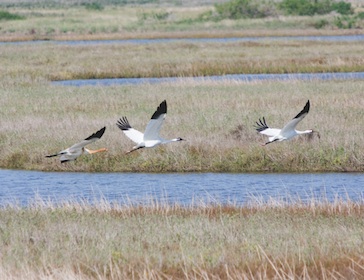 Whooping cranes arrive at their winter home on the Texas coast

[Update, March 26, 2013: A federal appeals today temporarily suspended a lower court’s ruling that had halted Texas’ issuance of river-water permits, detailed in the article below. That initial ruling was aimed at protecting the endangered whooping crane species. The U.S. Court of Appeals in New Orleans also said it would speed up its consideration of Texas officials’ appeal of the earlier, permit-blocking order by U.S. District Judge Janis Graham Jack. The Texas Commission on Environmental Quality praised the appellate ruling: “The State of Texas is appreciative of the Fifth Circuit’s decision to stay the lower court ruling. As we said previously, this case is an attempt to rewrite the Texas Water Code. It is critical that the state retain the ability to regulate state surface water as provided under state law, and not the Endangered Species Act.”]

Supporters of the whooping crane, one of the nation’s most famous endangered species, are celebrating a federal court victory in their lawsuit to ensure adequate freshwater flows into the majestic birds’ marshy winter habitat on the central Texas coast.

Ruling Monday on testimony delivered in a 2011 trial of a lawsuit by environmentalists, U.S. District Judge Janis Graham Jack of Corpus Christi ordered a temporary halt to Texas’ issuance of new water permits for a river system that serves cities, industry and agriculture.

Jack ruled that the Texas Commission on Environmental Quality had violated the federal Endangered Species Act through its management of water resources, including its failure both to monitor water use by permit holders and to use its emergency powers to protect the cranes.

Environmentalists have worked for many years to ensure enough water flows down rivers into the state’s coastal bays and estuaries to support wildlife populations in general – not just the whooping crane.

The outcome of the lawsuit over the imperiled crane species has potentially sweeping implications, dramatically underscored in recent months as Texans debate how to address controversial water-allocation issues amid continuing drought and scientists’ projections that manmade climate change will reduce water supplies in Texas as the state’s population grows.

In an email about the ruling to the International Crane Foundation’s board of directors and others, that Wisconsin-based conservation group’s president and CEO, Rich Beilfuss, exulted “We won!” and provided this summary:

The Court ordered that the TCEQ cannot approve or grant new water permits affecting the Guadalupe or San Antonio Rivers until the state of Texas provides reasonable assurances to the court that such permits will not “take” [cause the death of] whooping cranes in violation of the Endangered Species Act. Within 30 days, the TCEQ must seek an “Incidental Take Permit” that requires development of a Habitat Conservation Plan. The Habitat Conservation Plan must include conservation measures designed to minimize and mitigate the impacts of taking species listed under the act. As we discussed back in 2010 when we first joined with TAP [The Aransas Project, a Texas-based conservation group], this was our ultimate goal: a mandated Habitat Conservation Plan that will better ensure the future of whooping cranes on their wintering grounds in Texas. Once this moves forward, we will be heavily involved in the development and ultimately the implementation of the plan.

If a federal judge rules in favor of TAP, the way Texas manages the Guadalupe River and its estuary, San Antonio Bay, will be fundamentally changed. The state may have to guarantee that enough freshwater is allowed to flow from the Guadalupe into San Antonio Bay to nourish the blue crab population, the primary food there of the whooping crane.

During the first two weeks of December [2011], experts on the cranes and estuaries argued in federal court about what caused the loss of 23 whooping cranes during their 2008-09 wintering season in Texas. Experts for TAP argued that the birds had died of emaciation and predation brought on by extreme drought. Experts for the Guadalupe Blanco River Authority, which represented the state’s case, said that the birds had survived other droughts and are highly resilient. There was no solid proof that 23 died, since U.S. Fish and Wildlife officials found only four carcasses. The GBRA argued that the cranes are omnivorous and when blue crabs are down, whooping cranes can survive on other foods such as clams, snails, insects, snakes, fiddler crabs and fish as well as plants, including acorns and wolfberries, a wild pepper that favors brackish marshes. The defendants questioned whether whooping cranes need to drink fresh water at all and whether blue crabs need freshwater inflows to reproduce.

The Bloomberg news service reported that Bill West, the GBRA general manager, had said by email that the judge’s ruling “is wrong on the facts and the law, and we intend to appeal.”

Jim Blackburn of Houston, lead attorney for the plaintiffs in the case, offered a diametrically opposed view to TCN last year when he characterized the strength of the case that he had presented: “We think we proved a significant statistical relationship between freshwater inflows and whooping crane mortality.”

The TCEQ issued this statement Tuesday in response to the ruling:

The TCEQ is reviewing the court’s opinion and verdict and considering all options, including appeal. While disappointed, but not surprised, the TCEQ vigorously disagrees with the court’s conclusion that “this case is well-suited for an (Incidental Take Permit) and corresponding (Habitat Conservation Plan).” Likewise, the TCEQ also intends to expeditiously seek relief from the court’s action enjoining the agency from approving or granting new water right permits. As argued during trial, the TAP case is an unconstitutional attempt to use the Endangered Species Act as cover for rewriting the Texas Water Code.

“I am disappointed with the outcome of the case, but not deterred. The science and law will prove out in the end,” said TCEQ Chairman Bryan W. Shaw, Ph.D.

Dow Chemical Co’s Seadrift plant, one of the largest water users on the river system, sits across the bay from the refuge.

Further inland, the same river system supplies drinking water and hydroelectric power to cities including San Antonio. The Texas Chemical Council, which represents more than 60 plants – all of them dependent on river water – joined the lawsuit to protect the rights of industrial water users.

Water regulators said during the trial that a win by environmentalists could cut the water supply for industrial and municipal users by 50 percent in the watershed. They warned that such a ruling could be used to upend water rights on other Texas river systems.

In a statement about the ruling, however, Ken Kramer, water resources chair of the Sierra Club’s Lone Star Chapter, offered this countering view:

This court decision creates a great opportunity for developing an approach in the Guadalupe River Basin that will allow species such as blue crabs and whooping cranes to thrive while also meeting the essential water supply needs of communities. The outcome in the issue of protecting endangered and threatened species in the Edwards Aquifer and at Comal and San Marcos Springs [in Central Texas] provides a good example of the positives that can result from such court decisions. That federal court decision in the 1990s led to groundwater withdrawal requirements that spurred San Antonio to become a national leader in water conservation and recently resulted in a habitat conservation plan for species that represents a consensus among a wide range of stakeholders. The TAP decision could be that kind of action-forcing event that leads to a comprehensive approach to water issues in the basin that benefits everyone.

In his article for TCN last year, Berryhill wrote:

The whooping crane suit could serve as a signal to Texas water planners to include the Texas bays, including their multimillion-dollar fishing and tourism industries, as part of the planning, along with cities, industry and agriculture. Or it could be a signal that in the coming water wars – which increasing droughts and other climate-change impacts that scientists have projected for Texas could undoubtedly aggravate – both planners and conservationists need to lawyer up.

Last month, the Fish and Wildlife Service reported that it had estimated 279 whooping cranes comprising the species’ last remaining wild flock wintered in Texas this year (the winter of 2012-13) – 257 in the cranes’ primary wintering grounds in and around the Aransas National Wildlife Refuge north of Corpus Christi and another 22 at inland locations.

“Last year,” the agency said, “the survey estimated a total of 267 whooping cranes in the wild, including 254 on the primary wintering grounds and 13 beyond.”

That meant about 7.9 percent were estimated to be at inland locations this year, compared to 4.9 percent during the 2011-12 wintering period. The 2012 article in Texas Climate News discussed the relevance of the numbers of cranes wintering at inland sites in Texas to the debate over the species’ requirements:

The GBRA’s experts contend that whooping cranes are highly adaptable to brackish conditions and may not even need to drink fresh water. […T]his contradicts years of field observations in which biologists have seen cranes fly as much as three miles to fresh water to drink. Frequent daily flights for water, they contend, weaken the birds, making them vulnerable to hunger and predators.