Opinion pendulum continues its swing away from climate-change skepticism 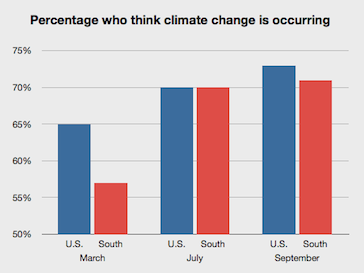 UT Energy Poll findings in 2012 for the entire U.S. and southern states

The public-opinion pendulum continues to swing away from skepticism about climate change, according to two new national polls that echo the findings of a University of Texas poll that was issued in October.

Whether it’s a result of extreme weather events like Hurricane Sandy and punishing drought, a waning of the hard-right disdain for the mainstream scientific consensus on manmade global warming, an improving economy or some combination of factors, the trend is increasingly evident.

The AP-GfK survey, conducted in late November and early December, found that 78 percent of respondents said global temperatures have probably been going up over the past century. In an AP poll in 2009, 75 percent said yes to that question.

The number saying a temperature increase has probably not happened declined from 22 percent to 18 percent over those three years.

The biggest change in the polling is among people who trust scientists only a little or not at all. About 1 in 3 of the people surveyed fell into that category.

Within that highly skeptical group, 61 percent now say temperatures have been rising over the past 100 years. That’s a substantial increase from 2009, when the AP-GfK poll found that only 47 percent of those with little or no trust in scientists believed the world was getting warmer.

Other findings in the AP poll:

A 77-year-old Houstonian who saw a link between global warming and “recent extreme weather” was among those quoted in the AP story:

Bloomberg News’ poll, conducted from Dec. 7-10, recorded an increase in the number of Americans who think global temperatures are rising “because of human activity” – from 58 percent in September to 62 percent this month. Those saying they don’t think that’s happening went from 34 percent to 28 percent.

In 2008, as the U.S. economy took a severe nosedive, opinion polls started registering notable declines, particularly among Republicans, in acceptance of the conclusion by a huge majority of scientists that human activity is heating and disrupting the earth’s climate. But recent poll results show that “much, if not all” of that shift has been reversed, Edward Maibach, director of the Center for Climate Change Communication at Virginia’s George Mason University, told Bloomberg.

The latest University of Texas Energy Poll, released in October and reflecting a national survey in September, is one of the polls to record that reversal, measuring its progress over the course of this year and across party lines.

As TCN Journal reported in July, the UT poll, conducted by the university’s McCombs School of Business, found that the percentage of respondents saying climate change is occurring jumped from 65 in March to 70 in July. In the September survey, the percentage rose further to 73.

The biggest shifts occurred among political Independents (whose acceptance that climate change is happening rose from 60 percent in March to 79 percent in September) and Republicans (with acceptance rising from 45 percent to 51 percent). Democrats’ acceptance stayed about the same – going from 84 percent to 85 percent.

In an announcement of its latest Energy Poll results, the UT business school said that the increased agreement that climate change is happening was most notable in a group of Southern states, including Texas. In those states, the percentage acknowledging the reality of the climate trend rose from 57 percent in March to 71 percent in September.