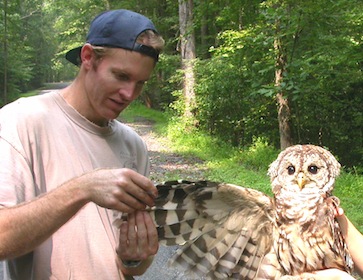 A. Marm Kilpatrick of the University of California, Santa Cruz

As anyone who pays even a little attention to the news knows, the Dallas-Fort Worth area has been contending lately with a major outbreak of West Nile virus (WNV), a mosquito-carried illness that arrived in the U.S. in 1999 and can be fatal, though it usually is not.

West Nile virus is spread to humans and other animals by mosquitoes that have bitten infected birds. Climate is one of the variables in the disease’s transmission that is receiving increasing attention from researchers and public health officials.

According to the latest statistics that had been published by the Texas Department of State Health Services at the time of this article’s publication, there have been 586 cases of the illness, including 21 deaths, in 52 Texas counties this year. The previous year with the most cases in Texas was 2003, with 439 cases with 40 deaths in 86 counties.

Texas – and the DFW area, in particular – is the national epicenter for this year’s cases of West Nile virus disease. In its most recently published tally, the U.S. Centers for Disease Control and Prevention said last week that there had been 693 cases of the illness, including 26 deaths, this year.

Dallas County – where both county and City of Dallas officials have declared public health emergencies – reported 242 WNV cases with 10 deaths through last Friday. Tarrant County, which includes Fort Worth, reported 205 cases including four deaths through Monday.

To explore the climate angle on West Nile virus and the DFW-area outbreak in particular, Texas Climate News posed several questions to A. Marm Kilpatrick, a biologist at the University of California, Santa Cruz, and leading researcher on the ecology of infectious diseases.

In 2008, Kilpatrick was the lead author of a study published in the journal PLoS Pathogens, which reported that higher temperatures had “helped a new strain of West Nile virus invade and spread across North America,” according to a report on the study by his university.

“The study shows that the warmer the temperature, the greater the advantage of the new strain. It also indicates that increases in temperatures due to global climate change would have major effects on transmission of the virus,” Kilpatrick said at the time.

In 2010, the National Institute of Allergy and Infectious Diseases announced a four-year, $2 million grant to UC Santa Cruz for work that Kilpatrick is leading to achieve better understanding of the effects of climate change on West Nile virus’ distribution in North America and how it impacts public health.

“One thrust of the project is to find out what the climatic factors are that determine whether it’s going to be a bad year for West Nile virus,” he said in a university announcement of the research effort.

The American Ornithologists’ Union named Kilpatrick as the winner of its Ned K. Johnson Young Investigator Award in 2008 with this praise:

Kilpatrick studies the impact of pathogens on animal populations, the effects of changes in animal communities on pathogen dynamics, and the spread of animal pathogens to new areas. His work is important, timely, and at the cutting edge of the field, as reflected in extensive media coverage, requests to testify before Congress, and abundant citations of his research. Originally trained as an engineer … Kilpatrick has become a leading figure investigating the ecology of disease in avian populations.

Q: First, please offer whatever general observations you may have on the climate-change implications of the Dallas-Fort Worth area outbreak of West Nile virus in connection with the findings in your 2008 study in PLoS Pathogens.

A: It’s not clear to me that we can ascribe the outbreak to climate change. As with any other individual event (e.g. a hurricane or heat wave), attribution is difficult or impossible. In addition, a complicating factor is that we don’t fully understand the relationships between temperature and rainfall and WNV transmission in the field, as detailed below.

Q: In particular, is there evidence that the mosquitoes involved in the DFW area this year represent the new strain in your study – or is it possible this is yet another, newer strain?

A: I have not heard about detection of any new strains of WNV so I’d guess it is the [same] WN02 type of virus, but I haven’t heard of anyone genotyping the virus there so anything is possible.

Q: All of Texas had an extremely hot and dry summer last year, and temperatures around the DFW area were especially hot. Were those summer conditions, followed by wetter conditions early this year, possible or likely factors in this year’s West Nile virus outbreak – in light of your finding that “increases in temperature greatly accelerated transmission by increasing the efficiency of viral replication in the mosquitoes?”

A: There are several anecdotal stories suggesting that this pattern influences WNV transmission but I am not convinced by any of these studies – simply put, they are not rigorously done.

That being said, it is possible that climate is playing a role. One mechanism that has been proposed (but not tested with data) is that droughts kill predators of mosquito larvae so that the following year mosquitoes do well and WNV epidemics are intensified. It would be nice to see a detailed study of this idea but none have been done yet.

Q: Where do things stand with regard to the research you’re now doing under the National Institutes of Health grant that was announced in 2010 to examine the relationship of climate change and the transmission of West Nile virus and other mosquito-borne diseases?

A: We are attempting to understand the link between climate and WNV, including exactly the events like that one in Texas. However, when we look at the data broadly, we find that other factors appear to be stronger drivers than climate. However, these analyses are ongoing and so I’m not in a place to make strong statements.

Q: What are some of the complexities that make this sort of research difficult in terms of identifying regional and local factors involved in West Nile virus transmission that are relevant to public health officials?

A: There are a few key issues:

1) Increasing temperature can increase transmission through viral replication, as described in the 2008 PLoS Pathogens paper, as well as more frequent biting by mosquitoes due to faster digestion of bloodmeals and egg development, and possibly by increasing developmental rates of mosquito eggs/larvae. This last mechanism has not been fully explored – we know mosquitoes develop faster at higher temperatures but we don’t know if this always translates into more mosquitoes. However, increasing temperature can also decease transmission by shortening mosquito lifespans. We don’t know which is more important in the field.

2) The influence of rainfall can also be mixed. Some water is required for mosquito larvae, but there is some limited evidence that mosquitoes can be flushed from containers by heavy rain.

3) Finally, WNV is a multi-host pathogen, transmitted among many different birds – humans and other mammals are incidental bystanders. We aren’t sure to what extent human behavior determines human infection risk. There are several studies showing that it can influence things to some extent, but whether climate influences or human behavior are more important is not yet known.

Thus while we understand many of the individual components of how temperature and rainfall can influence WNV transmission, discerning the relative importance and effects is really quite challenging.

Q: In your opinion, does science know enough already about the current and potential impact of climate change on West Nile virus and other mosquito-borne diseases for public health officials to be factoring climate change into their planning for addressing the vectors [insects that transmit disease] – things like having enough insecticide on hand in case they decide to undertake more spraying? What should they be doing or thinking about doing?

A: Unfortunately, no. But that is the thrust of our research and we hope to provide meaningful guidance on exactly this.

Q: In your opinion, will climate change – as projected by models cited by the Intergovernmental Panel on Climate Change, National Academy of Sciences, etc. – probably mean the United States has to contend more with West Nile virus and other mosquito-borne diseases in the years and decades ahead?

A: Due to the reasons described above, I don’t think we can give a definitive answer yet. What I can say is that in the colder areas (e.g. Maine) warming will definitely increase WNV. In other areas it is less certain.