Back in April, TCN Journal reported that national polls were showing that public acceptance of the reality of climate change appeared to be increasing after a few years of decline.

Now, a special edition of The University of Texas at Austin Energy Poll lends support to that conclusion.

Posted on the UT Energy Poll’s website on Tuesday, the findings show a jump between March and July in the percentages of Americans – particularly among Republicans and Independents and especially in the South – who say they “think that global climate change is occurring.”

Nationally, 70 percent of poll respondents this month said they think climate change is happening, compared to 65 percent in March, while the percentage saying they don’t think it is occurring dropped from 22 to 15 percent.

“We thought it would be interesting to conduct a one-question poll on the climate question,” given the recent heat wave in many areas,” Sheril Kirshenbaum, director of the poll, which is conducted by UT’s McComb School of Business, told Texas Climate News by email.

Asked if she thought recent, very hot weather in much of the country was a factor in the rising acknowledgement that climate change is under way, Kirshenbaum replied:

“Yes, there is some literature on how extreme weather events influence public attitudes on climate, so I was interested to take a closer look at what we might be able to see immediately.”

The UT Energy Poll is conducted every six months with a variety of questions that seek “to provide an objective, authoritative look at consumer attitudes and perspectives on key energy issues” in order “to help inform national discussion, business planning and policy development.”

The latest biannual poll was conducted from March 5-16, with 2,371 respondents. The special poll on climate change was carried out from July 12-16, with 1,029 participants.

Journalist Andrew Freedman, writing on the Climate Central website in a July 21 article, summed up the meteorological context of the UT Energy Poll’s climate query:

The weather this summer has been so extreme that it has rivaled the most destructive and unbearable summers in U.S. history, years that are infamous in weather lore. Those years include 1934 and 1936, which were in the middle of the Dust Bowl era, as well as 1954 and 1988, which was the year that Yellowstone National Park burned and NASA scientist James Hansen first warned the U.S. Senate about the consequences of manmade global warming.

As a reporter and analyst on the extreme weather and climate change beat, I’ve found this summer to be dizzying, with too many extreme events and broken records to count, let alone write about. First it was the heat, then the wildfires, and now the ever-expanding drought that seems intent on swallowing the entire country and kicking off a global food crisis. 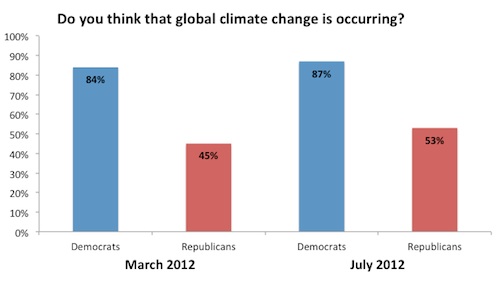 With such conditions as the unfolding extreme-weather backdrop, the UT Energy Poll’s findings included the percentages saying they think climate change is occurring rising from 45 to 53 percent among Republicans (a group whose climate-change skepticism grew dramatically in recent years), from 84 to 87 percent among Democrats, and from 60 to 72 percent among Independents, between March and July.

By region, the changes since March lined up this way: In the South, the percentage saying climate change is occurring rose from 57 to 70 percent and in the West from 71 to 74 percent, while it stayed the same (64 percent) in the Midwest, and declined from 76 to 72 percent in the Northeast.

One poll that has registered weather perceptions as a factor in agreement that climate change is happening was conducted by the University of Michigan and Pennsylvania’s Muhlenberg College in December.

TCN Journal’s April article on recent polling quoted those researchers’ report on their findings regarding the possible reasons behind a jump in public recognition of “solid evidence that the average temperature on Earth has been getting warmer:”

The Associated Press was among the news organizations reporting last week that meteorologists expect more extreme conditions in the next few months:

The unusually hot dry weather that has gripped the nation will not let up its stranglehold over the next few months, federal weather forecasters said [July 19].

And that means the heartland’s “flash drought” will linger at least until around Halloween and even spread a bit farther north and east.

The National Oceanic and Atmospheric Administration’s outlook for August through October shows that nearly every state likely will have hotter than normal temperatures. Much of the Midwest is likely to be drier than normal, too.

The New York Times reported on the same federal forecast:

The drought that has settled over more than half of the continental United States this summer is the most widespread in more than half a century. And it is likely to grow worse.

The latest outlook released by the National Weather Service […] forecasts increasingly dry conditions over much of the nation’s breadbasket, a development that could lead to higher food prices and shipping costs as well as reduced revenues in areas that count on summer tourism. About the only relief in sight was tropical activity in the Gulf of Mexico and the Southeast that could bring rain to parts of the South.

The unsettling prospects come at a time of growing uncertainty for the country’s economy. With evidence mounting of a slowdown in the economic recovery, this new blow from the weather is particularly ill-timed.

Already some farmers are watching their cash crops burn to the point of no return. Others have been cutting their corn early to use for feed, a much less profitable venture.

Image credit: The University of Texas at Austin Energy Poll