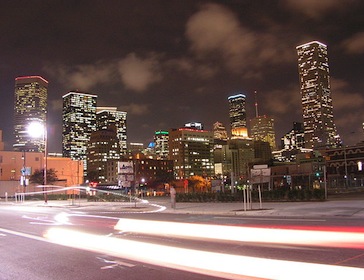 Texas is a legendary producer and consumer of energy, but recent developments continue to illustrate how Texans – more fitfully than some advocates would prefer – are also embracing energy saving through efficiency measures.

This week, the U.S. Environmental Protection Agency released its latest annual ranking [PDF] of metro areas with the most buildings certified under its Energy Star efficiency program for 2011.

As was the case in the 2010 ranking, two Texas areas – Houston and Dallas-Fort Worth – were among the top 10. No other Texas cities showed up on the list of the top 25 cities.

Statistics released by the EPA showed that the numbers of Energy Star buildings in Houston and Dallas-Fort Worth have continued to grow each year since 2009 after a decline in the number of such buildings after 2008.

By comparison, the Atlanta area – another Sun Belt metropolis, though smaller and slower-growing than both Houston and Dallas-Fort Worth – has jumped well ahead of them in terms of Energy Star buildings.

Since 2008, Atlanta has risen from ninth place to third in the EPA metro areas ranking. Its number of efficiency-certified buildings jumped from 97 in 2008 to 359 in the 2011 tally – about 50 percent fewer than Houston’s at first, but about 50 percent more in 2011.

By other measures cited by the EPA, however, Houston is ahead of Atlanta – in terms of total floorspace in Energy Star buildings (86.4 million square feet versus 78.7 million), annual energy-cost savings ($79.7 million versus $55 million) and pollutant emissions prevented, expressed as the equivalent number of homes’ electricity use (11,700 homes versus 9,700).

In terms of emissions prevented by its Energy Star buildings, Houston ranked third on the 2011 list of the 25 metro areas with the most such buildings, behind Chicago and Washington, D.C.

Building owners in smaller Texas cities have received EPA recognition for their achievements in the realm of energy efficiency.

Hartman Elementary School in Wylie and an Office Depot store in Plano (both part of the DFW metro area) were among the 10 top finishers [PDF] in the Energy Star program’s 2011 National Building Competition, in which employees competed to see how much they could reduce their energy use over a 12-month period.

Ranked according to percentage of reduction, Hartman Elementary was fourth on the list of top finishers, reducing its energy consumption by 43.2 percent, saving $26,271 and preventing the emission of 167 metric tons of greenhouse gases, according to the EPA.

The Plano Office Depot was seventh on the list with a 34.1 percent energy-use reduction, cost savings of $14,989 and avoidance of 101 metric tons of greenhouse gases.

In the same competition, St. Mark’s Medical Center of La Grange, located between Austin and Houston, was the winner in the hospital category, reducing energy consumption by 22.7 percent.

An EPA profile of the not-for-profit hospital’s efforts said:

Savings were achieved without capital expense, other than adding a few sensors in areas needing closer monitoring. Energy use reductions came entirely from changing how existing systems were configured and operated. Engineers specializing in no-capital-cost energy use reduction performed a thorough analysis of existing systems and their use. Then, it was a matter of fine-tuning these systems to implement what the analysis determined would be necessary.

An announcement by the St. Mark’s management last month said involvement in the contest led to continuing benefits:

This competition has shown the hospital staff a new way to focus on energy efficiency in a more comprehensive and measurement-driven way. It has made it easier for the operations staff to understand all the ways their facility uses energy and how their actions make an impact. Another improvement for St. Mark’s is more accurate energy consumption forecasts for budgeting and procurement.

Experts at the Energy Systems Laboratory of Texas A&M University estimated [PDF] that the new code that went into place in January would result in energy savings such as a 22.7 percent saving on electricity and 10.1 percent on natural gas in an electric/gas house in Harris County, heart of the Houston metro area.

The new statewide codes are in line with international conservation codes adopted in 2009. Environmentalists and other efficiency advocates campaigned vigorously last year for Houston officials to match even stricter international codes, which supplant the 2009 codes this year.

They argued that adopting the 2012 international codes would help maintain Houston’s leadership role on energy efficiency, making the city’s standards about 15 percent stricter than the new statewide standards.

Advocates of the stronger city standards had said they were needed to help the state avoid rolling blackouts like the outages that occurred last year. Construction industry officials warned, however, that greater upfront building costs (which efficiency advocates said would be offset by later energy-cost savings) could harm some buyers’ ability to afford new houses.

Last October, the American Council for an Energy-Efficient Economy issued its latest study ranking states according to their progress toward greater efficiency. Texas was in 33rd place, down from 32nd place in 2010, 23rd place in 2009 and 19th place in the group’s 2008 report.

Texas was the first state to adopt a standard with energy-efficiency goals for utilities, taking that action in 1999. The council noted that the state’s Public Utilities Commission had increased those goals in 2010, adding customer-cost caps.

The group’s report also noted that the Texas Legislature had restructured the efficiency standard last year so “utilities with declining or rapidly growing load growth will have more predictable and consistent goals than those that were set based on load growth,” and adding “focus on reducing demand in the winter, which is more likely to result in real energy efficiency savings than summer demand response programs, which simply shift load and reduce peak demand.”

The council said its rankings are “based on an array of metrics that capture best practices and recognize leadership in energy efficiency policy and program implementation.”