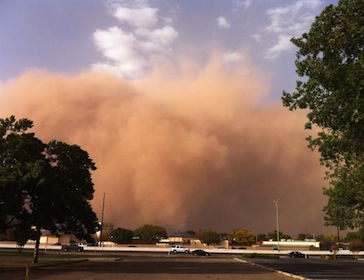 The towering reddish-brown wall of dust that descended on Lubbock from a clear blue sky last October transformed the city’s sunny streets into a ruddy, twilit tableau in a matter of minutes – a spooky sight not often seen in West Texas since the Dust Bowl.

The intense dust storm (a haboob, in meteorological parlance) came amid an epic drought that has parched the South Plains and much of the rest of the state for months, driven by a persistent La Niña weather pattern in the Pacific Ocean. An unusual combination of winds picked up a loose layer of desiccated soil and swirled it aloft, creating a dense cloud of dirt that coated homes and yards.

Haboobs are not unknown in these parts, but this one, coming in a year when just 5.86 inches of precipitation fell – the driest on record – underscored Lubbock’s vulnerability to climate disruption. Katharine Hayhoe, an atmospheric scientist at Texas Tech University in Lubbock, says that while it’s impossible to attribute any particular weather event to global climate change, “What we can say is that climate change has altered our background conditions.”

Taste of the future

For a taste of what that changing background may look like, Hayhoe points to last summer, when the number of days over 100 degrees in Lubbock – 48 total – “was typical of what we expect the average summer to be like by the middle of the century.”

If the summer of 2011 is any gauge, people living in Lubbock in 2050 will regularly experience more challenging conditions. As last summer’s drought wore on, for example, the city imposed watering restrictions. People’s lawns dried up, power consumption for air conditioning surged and crops withered in the fields.

It’s a scenario that gives Aubrey Spear, director of Lubbock’s water utility, plenty to think about. Although the city of 230,000 lacks surface water in its immediate area, it sits atop the Ogallala aquifer, a vast pool of groundwater stretching from Texas to Nebraska. But decades of heavy irrigation for farming – the region produces more than half of the nation’s cotton – has so drastically depleted the resource that Lubbock must pipe drinking water from elsewhere.

For decades, the city drew most of its water from Lake Meredith, a reservoir on the Canadian River, 150 miles from Lubbock and 30 miles northeast of Amarillo, with supplemental supplies from two well fields closer by, Spear says. But Lake Meredith has fallen to historically low levels. “This year, for the first time in 40 years, it’s gone,” Spear says. “We’re not using any of it.” Meanwhile, a new pipeline from Lake Alan Henry, 50 miles southeast of Lubbock, won’t be ready until next fall.

Given predictions of another dry La Niña this year, “We’re going to take the precaution and go into Stage 2 water restrictions in April,” Spear said. That will reduce permissible yard watering frequency from two days a week down to one, he said.

It’s a grim picture, but Spear, who is updating the city’s 2007 water supply plan, describes a “three-legged stool” of measures aimed at providing Lubbock with a sustainable water supply well into the future. They include greater conservation, diversification of water resources and more water reuse.

“On the conservation end, over the past decade we’ve been quite effective in educating the public, as well as raising our rates to the point where people think twice before they dump a lot of water on the grass,” Spear says. Ten years ago, the city averaged 230 gallons of water per capita per day, but stringent conservation measures brought that down to 145 gallons in recent years. The usage number jumped amid last summer’s drought to 176 gallons.

In addition to making water more expensive, local officials have worked with nurseries and developers to promote the use of less-thirsty plants for landscaping, Spear says. Homeowners have also been encouraged to plant drought-tolerant lawn varieties like Bermuda grass and Buffalo grass instead of the lush fescues adapted to wetter conditions. “We call it ‘SmartScape,’” Spear says. “It fits our unique climate. We’re not Dallas and we’re not El Paso. We’re in between.”

Pickens originally wanted to pipe the water 350 miles to the Dallas-Fort Worth metroplex, but when that deal fell through he agreed to keep the water in the Panhandle. Exuberant local officials proclaimed the sale would guarantee water to CRMWA member cities for 100 to 200 years, but Spear takes a more conservative view. “I wouldn’t go beyond 50,” he said. “I’d rather under-promise and over-deliver.”

Lubbock is also studying ways to get greater mileage from water reuse, Spear says. Half of the city’s wastewater is stream-quality discharge, but more work is needed to get other half to that point, he said. Meanwhile, “We have other demands that we don’t want on the potable water supply.” They include nearby power plants that need water for cooling and a rush by energy companies exploring for natural gas who want water for the drilling technique known as hydraulic fracturing, or fracking. Recycled water would help meet those demands, Spear says.

“We’re fortunate to have both an aquifer and lakes, so we’re just trying to stay ahead of the game,” he says. “I think we’ve got it under control.”

Ken Rainwater, a hydrologist and professor at the Texas Tech Water Resource Center, agrees Lubbock has done a good job of facing up to the challenge, putting it ahead of Amarillo, the next-largest city in the region, in adopting conservation measures. “We have been cognizant of our water limitations down here,” Rainwater says. “It’s already enforced by what you pay for water.”

But most of the region’s groundwater is devoted to agriculture, Rainwater says. Farmers have been pumping from the aquifer faster than it recharges for decades, he says, in part because they can: Under Texas law, a landowner owns the water under his land outright. Meanwhile, he adds, federal farm policies encourage farmers to operate for short-term profit, rather than conserve the resource for the long haul.

“The incentives for the landowners are to use the water up and some time later convert to dry-land uses,” Rainwater says. But that will inevitably lead to long-term changes in the region. “The generation or two after us is likely to see a very different land use than we do,” he said.

The process is already under way, as water reserves in some areas shrink to the point of being unusable. The underside of the Ogallala aquifer doesn’t rest on a flat horizontal plane, Rainwater notes. In some areas, the saturated thickness of the aquifer is still 300 feet or more, while in others it’s now less than 20 feet. Once the water is gone, it’s gone for good.

“We need to be careful about how we plan for the future,” Rainwater says. “Water’s not like air. It’s not really free. We don’t deserve to have a green lawn like they do back in England.”

Hayhoe, a key contributor to the U.S. Global Change Research Program, notes that the Lubbock area, which averages 18.6 inches of precipitation annually, has always been known for its climate variability. “When it’s an El Niño year we have all the water we need and then some,” she says, “and in a La Niña, like we’ve had for the last couple of years, it’s really dry.”

With La Niña, a “self-reinforcing feedback loop emerges,” with higher temperatures leading to less rain – which in turn drives temperatures even higher, she says. That will lead to changes in precipitation and temperature extremes. And of course, warmer temperatures will drive demand for more irrigation.

In Global Climate Change Impacts in the U.S., a 2009 federally commissioned report Hayhoe helped to compile, it was estimated that the Lubbock area might see 25 percent less springtime precipitation in the waning years of this century if carbon dioxide emissions continue at a high rate. Meanwhile, summertime temperatures could increase by as much as 9 degrees over the same period.

“These changes are interacting with vulnerabilities we have already built into our systems,” Hayhoe says. “We have lawns here in Lubbock like they have in Houston . . . We basically set ourselves up to have certain expectations, and we are already on the edge.”

As a climate scientist, Hayhoe often encounters resistance from skeptics who deny that climate change is under way (or alternatively deny that humans have played any role in triggering it). As the recent dry spell makes clear, it really doesn’t matter.

“I think that one benefit of the drought is that it has been a wakeup call for how vulnerable we are,” she says. “Regardless of the cause of the drought, it’s still a wakeup to what kind of conditions can occur, even naturally.”

Michael Haederle is a New Mexico-based writer. He has contributed to Miller-McCune, AARP Bulletin, the Los Angeles Times, People, Tricycle: The Buddhist Review, The Houston Post, Dallas Morning News and many other publications.