It should surprise no one who follows climate issues at all closely that new data released by federal officials on Wednesday showed Texas far surpasses other states in industrial emissions of global warming gases.

Earlier estimates had already put Texas at the top of state rankings for those emissions, which largely flow from the state’s many electric power plants, oil refineries and petrochemical facilities.

The data released this week by the U.S. Environmental Protection Agency, reflecting industry-reported emissions during 2010, were far more detailed, however, and easily accessible and sortable on an interactive map that the EPA placed online.

Texas had 673 facilities (about a tenth of the national total) that reported emitting a total of 294 million metric tons (MMT) of greenhouse gases (mainly carbon dioxide) in 2010, according to the EPA. Pennsylvania ranked second, with 129 MMT, and Florida third, with 125 MMT. 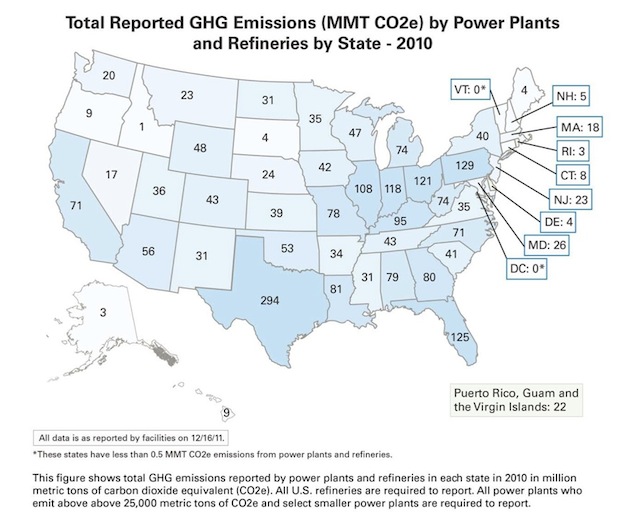 Emissions data were reported by industries to the U.S. Environmental Protection Agency

Nationwide and in Texas, power plants, refineries and chemical plants ranked first through third in emissions by industry type.

The reporting of greenhouse-gas emissions was required by a 2008 appropriations act. The data collected represent emissions from major stationary facilities, not additional sources such as motor vehicles and industrial plants with emissions below a reporting threshhold.

“This information can be used by communities to identify nearby sources of GHGs, help businesses compare and track emissions, and provide information to state and local governments,” the EPA said in an announcement. That statement was a clear allusion to the role that an older EPA program has played in spurring pollution reductions. The Toxics Release Inventory, which dates to the late 1980s, requires annual industry reports detailing emissions of potentially health-threatening pollutants, such as cancer-causing chemicals.

Under legal challenge by Texas and other parties, as well as strong criticism by Republican presidential candidates, the agency is proceeding to regulate climate-warming emissions under the federal Clean Air Act.

A top EPA official, Gina McCarthy, who heads the agency’s Office of Air and Radiation, told reporters Wednesday that it plans to release its rules for limiting emissions at new power plants by the end of this month. The EPA has delayed issuing the rules two times.

Although the EPA expects to release rules for new power plants later this month, McCarthy said it has no plans in the near term to publish rules for power plants and oil refineries that are already in operation.

“We have not prepared any proposal for existing facilities at this point,” she said. Existing plants emit the bulk of emissions from the [electric power] sector.

Refiners argued in response to the release of the data that their small national portion of industrial emissions meant they should not come under the new greenhouse-gas limits. [Editor’s note, Jan. 12, 2012: “Not” was inadvertently omitted from this sentence when this article was first posted.]

Using the EPA’s interactive map to compile data, the Environment Texas advocacy group released a list of Texas’ seven industrial facilities that ranked among the top 50 nationwide reporting the most greenhouse-gas emissions.

Luminant had said it would idle two of the three units at the Monticello plant, near Mount Pleasant in Northeast Texas, because of a separate set of EPA rules aimed at reducing coal-fired plants’ emissions of sulfur dioxide and nitrogen oxides, which pose health and environmental concerns but are not blamed for global warming.

Late last month, however, the company said the two units would continue operating because of a federal court order delaying the regulations.

Environmentalists and others campaigning against coal use have focused criticism on the Seymour plant in Fayette County, southeast of Austin. Last year, Austin Mayor Lee Leffingwell won their praise with a reelection campaign pledge to phase out the city-owned electric utility’s use of coal, the dirtiest major fuel in terms of greenhouse emissions.

In a settlement with the Audubon Society and Sierra Club last month, AEP SWEPCO said it would reduce use of the Welsh plant in Northeast Texas in exchange for the environmental groups’ withdrawal of legal challenges to a new coal-fired plant in Arkansas. The company also said it would install an electricity-producing facility using wind or solar power for its service area.

NRG, meanwhile, is teaming with the University of Texas and others to build a federally funded demonstration project at coal-fired units of the Parish plant near Houston. The project is being designed to capture 90 percent of carbon dioxide emissions for underground storage in oil fields.