The Park in Dallas: A useable green roof atop a downtown freeway 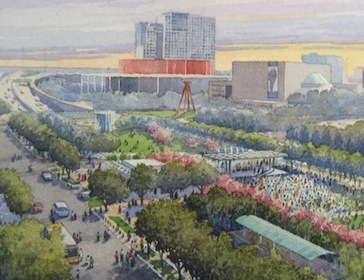 Shown in an artist's rendering, The Park's Great Lawn will be a venue for events such as concerts and festivals. It has a 3,000-person capacity.

Dallas, with its tangle of freeways and well-irrigated suburbs, is almost certainly not the metro center that leaps to mind when people think about “Smart Growth” and green building.

It has sprawled too far, become too smoggy and been too much of a sustainability bystander for anyone to confuse it with Portland, San Francisco or even Austin, places where even prosaic issues like waste management get zealous attention.

And yet, Dallas has a surprisingly good green story to tell. It ranks number two in the nation for cities using wind power (Houston’s No. 1). It’s on the front line of programs to develop electric car networks. Its transit system, Dallas Area Rapid Transit (DART), has spread 72 miles of light rail across the metro area, zooming past other Texas cities in offering significant mass transit options. And in the last decade Dallas has reinvigorated its city center, adding arts and entertainment venues, extending the urban hike and bike Katy Trail deeper into town and showing a new respect for the adjacent, wild and woody Trinity River bottoms with the installation of the Trinity River Audubon Center.

Developers added thousands of units of condominiums lofts and duplexes to re-create a residential ring around downtown that had been lost for decades, reclaiming areas known as Uptown, West Village and Victory Park and creating a more sustainable urban configuration where people could live closer to their work and play areas.

Construction has slowed, but Dallas has one more trick up its sleeve that will help tie many of these achievements together. Private investors, with the help of the city, state transportation department and federal stimulus money, are building a five-acre park that will serve as a treed, green play area between downtown high rises and the growing residential areas to the west and north.

The Park, as it’s called, will bring 300 trees, a stage and Grand Lawn, a children’s play area, a dog park and a botanical display garden to an area that was merely air space over a busy freeway, until city and state planners decided to put a green roof atop the Woodall Rogers connector highway. That created a spot for The Park, much as New York City found a park in the sky by transforming abandoned rail tracks into the now famous High Line nature trail.

A freeway lid with green design

The Park in Dallas won’t be the first time a lid over a freeway was turned into a useable space. Woodall Rogers Park Foundation President Linda Owen says similar parks can be found in Seattle and parts of Europe. But it may be the most advanced and holistically green way of executing such a project, with a cutting-edge design that’s placed supports alongside the highway so The Park can be set at street level. That removes any barriers, like steps up, that might deter people in wheelchairs or prevent direct access to visitors coming by bicycle or trolley, Owen said.

“The engineering is unique here, a lot of really creative engineering went into figuring out how to make the whole park exist at grade level,” she said, an effort that will make it “universally accessible.”

The $110 million public and privately funded project will employ geothermal power for heating and cooling and solar panels to power outdoor lights. Its restaurant center will have a reflective roof, LED lighting and use paints low in smog-forming chemicals called VOCs.

The underground irrigation system will not waste water by spraying it into the air, saving an estimated 322,000 gallons a year; the trees will provide about $20 million of pollution control over the next 50 years, and the gardens will showcase native plants and provide places for sustainability education. The Park’s mini-urban forest will sequester an estimated seven tons of carbon pollution per year once the trees are mature, and provide a shaded promenade unparalleled in any Dallas city park. All the greenery will mitigate the heat island effect that dogs most downtowns because cities’ massive concrete structures absorb and hold radiant energy.

Both the timing and the placement of The Park seem serendipitous. It will border the downtown Arts District, where the city proudly and painstakingly consolidated theaters, a symphony center and three key visual arts museums over many years, and also the bustling and hip Uptown and Victory Park areas where young professionals and even families have settled in.

This new walkable area of Dallas will offer the full complement of housing, dining and green space, with a smattering of shopping.

Architect Gary Gene Olp, a longtime sustainability booster for the city, says The Park also will provide a place for nature to re-inhabit a slice of downtown, attracting birds and bees, creating a wildlife oasis. But more importantly, people will flock to this slice of nature amid the concrete.

“Now we have the vision to see that if the city’s going to function, to be vital, to take its place in the future, you have to have that connection (to nature) and that interwoven fabric of community and business and culture and education,” Olp said.

The Park is essentially a massive infill development and is expected to spur additional infill development, says Owen. And that’s a key reason that the project won nearly unanimous support from the business community, which has chipped in $36 million in private donations to fund The Park. The City of Dallas saw both a business opportunity and a quality of life improvement and contributed $20 million, and other entities saw that the project fit their goals of pollution reduction, noise and climate change mitigation. Thus, the Texas Department of Transportation put in $22 million, federal stimulus money for shovel-ready projects came in at $16.7 million and the North Central Texas Council of Governments, always pushing for cleaner air, contributed $450,000.

The project made sense on so many levels — as a connector of neighborhoods, a draw for both downtown residents and visitors, a showcase for green building — that there was little disagreement during the planning phase, Owen said. It all dovetailed. The main hurdle – raising the funds – seemed surmountable with so many stakeholders.

The Park remains about $15 million shy of the estimated total cost to fully fund all the planned amenities and cover programming for the first three years. Planned activities and events include performances by Dallas Arts Magnet students on a stage on the great lawn; classes at the children’s garden and other events related to outdoor and sustainability issues . The Park’s deck and structure are fully paid for, however, and its future is further buoyed by the promise that when completed it is expected to spur further development in the downtown core, which will help grow The Park’s user base.

The Park’s multiple backers fully anticipate a ripple effect, explains Owen, with the ultimate prize being a more liveable downtown.

“This gives people another reason to move back into the inner city and reduce some of the sprawl that we’ve seen occurring in other decades in this area,” Owen said.

By The Park’s opening, set for fall of 2012, Dallas may or may not be able to count itself among the top sustainability-minded cities. But it will certainly boast a green heart.

Barbara Kessler is a Dallas-based journalist who has worked in television and for newspapers – mainly the Dallas Morning News, where she specialized for a time in covering children’s welfare. She is the founding editor of Green Right Now, which produces environmentally-themed web pages for television stations including Austin’s KEYE. An earlier version of this article was published by Green Right Now and an affiliated website, Your Green Path.