Snapshots of the drought: Impacts and implications of the record dry spell 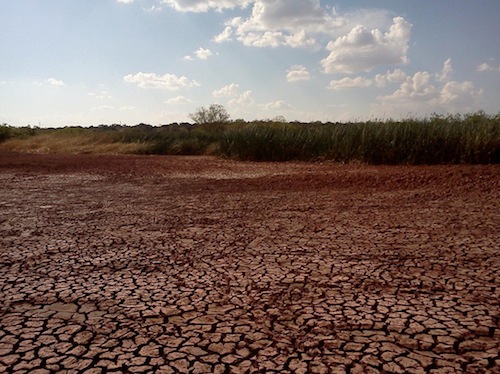 Texas’ record-setting drought could stretch on for years to come, the state climatologist says.

Already, the worst one-year dry spell since records started being kept in the 19th century has had dramatic and growing impacts, including billions of dollars in economic losses. Millions of trees have died or are expected to die because of the exceptionally hot, dry conditions to date. State officials are voicing new worries about the long-range adequacy of the state’s water supplies.

With this article, Texas Climate News is launching an occasional series, “Snapshots of the drought.” Installments will provide a montage of words and images in an effort to convey the drought’s vast scope and kaleidoscopic effects, along with references to sources with more details.

The extent of the drought and some of its key effects are illustrated by these maps. The first two show that most of Texas is in “exceptional” drought conditions (the worst possible category, beyond “severe” and “extreme”) and that this drought mainly affects Texas. The third map shows locations with water-use restrictions. The fourth map shows that virtually all Texas counties have outdoor burn bans in place. 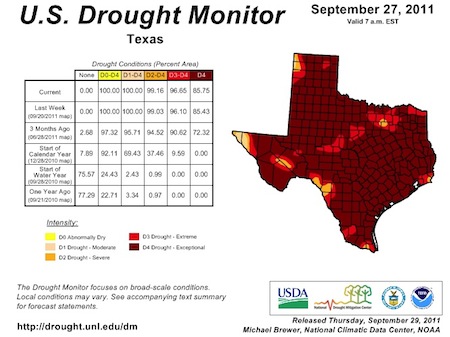 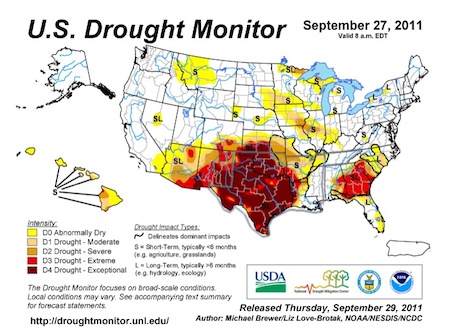 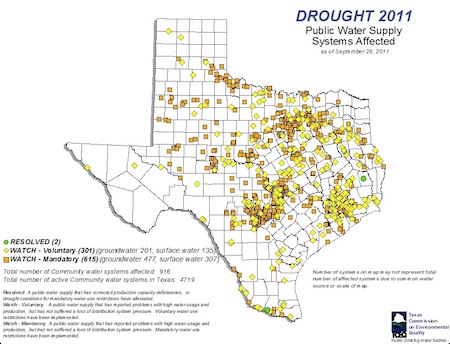 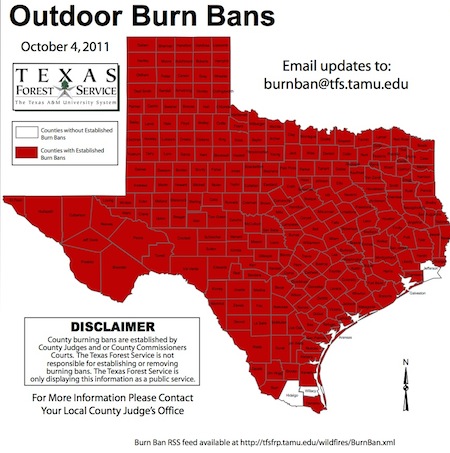 Texas Forest Service: Burn bans are in place across the state

How long could the drought go on?

As reported earlier by TCN, John Nielsen-Gammon, the state climatologist at Texas A&M University, is not optimistic:

He wrote on his blog last month that sea surface temperature patterns favoring drought seem “likely to last another decade. While not all of the next ten years are likely to be dry, they could be. In any case, if we’re ever going to break the (1950s) drought of record, this is precisely the situation in which it would happen.” [Corrected Oct. 7, 2011. Originally, this paragraph erroneously stated that Nielsen-Gammon had written that the current drought itself seemed “likely to last another decade.”]

Nielsen-Gammon told the Reuters news service that global climate conditions are such that the current drought, in a reporter’s paraphrase, “could wind up being a 15-year stretch if patterns hold.”

How much has the drought cost so far? These numbers provide part of the answer:

The most frequently cited statistic for the drought’s economic damage to the state is $5.2 billion, the latest estimate by experts at A&M for crop and livestock losses.

That figure was based on field surveys from last November through Aug. 1 of this year, so it will grow larger as the drought lingers. [MSNBC and CNN] 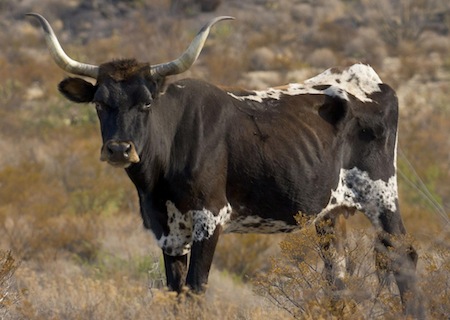 Since January, Texas agriculture has seen more than $150 million in agricultural losses due to wildfire, and experts say those figures are expected to continue to roll upward like the smoke pillars that dot the blackened landscape.

The biggest part of those agricultural losses to wildfires has been in ranch and industry infrastructure, such as fences and buildings. More than 1,500 cattle, horses, sheep and goats are estimated to have perished.

In another infrastructure estimate, the Insurance Council of Texas estimated that recent wildfires’ costs to homeowners have perhaps exceeded $250 million, a record high number for the state. [CNN] 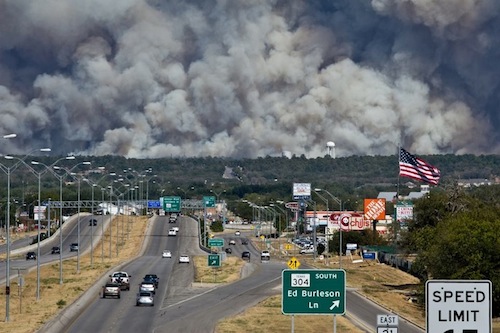 Smoke from the Bastrop County fires in September, seen from the city of Bastrop

Wildfires have raged in many parts of the state during the drought, but the most dramatic and damaging – indeed, the most destructive wildfire in Texas history – occurred in Central Texas’ Bastrop County last month, claiming two lives, charring more than 34,000 acres, destroying more than 1,500 homes, and devastating much of the rare Lost Pines ecosystem at Bastrop State Park.

[Update: On Oct. 6, the day after this article’s posting, the Texas Forest Service announced that its damage assessment of September’s Bastrop County wildfire indicated about 1.5 million trees may be lost as a result – about 78 percent of the live trees in the fire area, measured by volume.]

In East Texas, center of the state’s forest products industry, 2,151 wildfires had charred 207,763 acres, destroying 175 million cubic feet of timber worth more than $97 million, according to the forest service.

That timber would have translated, the agency said, into $1.6 billion worth of forest products and a total economic impact in the region of $3.4 billion.

Images taken from the Landsat 5 satellite show how massive September wildfires scorched thousands of acres in Bastrop County, according to the U.S. Geological Survey. The images depict an area around the city of Bastrop (left, identified in white letters) on Aug. 26, before the massive wildfires, and then on Sept. 11. The area shown is about 17 miles across.

The fires go on.

On Wednesday, Oct. 5, the day of this article’s posting, the Texas Forest Service reported that it had responded on the previous day to 11 new fires affecting 1,047 acres. They included one new large fire in Bastrop County, about seven miles northeast of the city of Bastrop, which affected 1,000 acres, threatened 50 homes and had prompted evacuations.

The agency said that in the seven days previous to its Oct. 5 report, it had responded to 104 fires affecting 5,731 acres.

On Sept. 27, the forest service, reporting a multiple-agency, state-federal assessment [PDF] for the Southeast (including Texas), said “dangerous” wildfire conditions were expected to remain through the fall:

Compounding the problem, the relentless drought has left in its wake an overabundance of dead and drying vegetation including high-risk fuels like pines and junipers that burn intensely.

Scientists including Nielsen-Gammon say manmade global warming has aggravated the current Texas drought. Texas Gov. Rick Perry is skeptical about the conclusion by the vast majority of climate scientists that human activities are warming the atmosphere and changing the climate.

That was the backdrop for a high-level political exchange last month that could portend more politicking on the Texas drought and its unfolding impacts, if Perry wins the Republican nomination to challenge President Barack Obama in next year’s national election:

Obama: “I mean, has anybody been watching the [Republican presidential candidates’] debates lately? You’ve got a governor whose state is on fire denying climate change.”

Perry spokesman Ray Sullivan: “It’s outrageous President Obama would use the burning of 1,500 homes, the worst fires in state history, as a political attack.” [CBS] 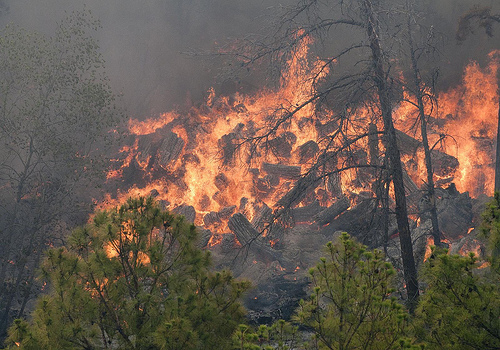