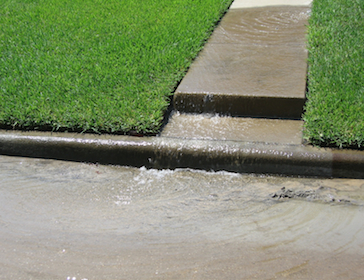 Water-main breaks caused by heat-triggered soil movement are a major problem during Texas' record-setting heat wave. This leak in Houston was one of more than 1,000 awaiting repairs this week – an unprecedented number, according to city officials. The Houston Chronicle reported Tuesday that "the leaks are growing at a faster rate than can be fixed – with the deficit increasing by 15 more each day."

When state officials published the last Texas State Water Plan five years ago, they conspicuously and controversially chose not to factor man-made global warming into their planning.

Now, with just four months to go until the Texas Water Development Board is required to adopt an updated rendition of the comprehensive water-supply blueprint for the state, the agency is still deciding how to address human-caused climate change, the board chairman told a Houston audience recently.

Speaking last week to about 200 people who gathered for a panel discussion of water issues in Houston, TWDB Chairman Edward G. Vaughan, an attorney from Boerne in Central Texas, said agency officials are still working on the 2012 State Water Plan.

“Considerable discussion” has been devoted to the “not-fully-understood subject” of man-made climate change and how to integrate it into the plan, Vaughan said, responding to a question submitted by Texas Climate News to panel moderators for their possible use in a question-and-answer period following the panel members’ remarks.

Climate change caused by human activities is being considered in the plan-development process along with various other climate factors such as fluctuating ocean-climate temperature patterns in the Atlantic and Pacific oceans, he said.

Texas’ current record-setting drought has been largely attributed by experts including state climatologist John Nielsen-Gammon to one such phenomenon in the Pacific, La Niña. At the same time, Nielsen-Gammon, a faculty member of Texas A&M University appointed to the state climatologist position by then-Gov. George W. Bush, has said he concludes that man-made global warming has made the current drought worse than it would have been without human influence.

Regarding human-caused climate change, the 2007 State Water Plan, prepared before Vaughan’s appointment by Gov. Rick Perry to the Water Development Board in 2008, said this:

“When considering the uncertainties of population and water demand projections, the effect of climate change on the state’s water resources over the next 50 years is probably small enough that it is unnecessary to plan for it specifically.”

Climate scientists’ criticism of the decision not to incorporate man-made climate change in the planning of future water supplies was typified by a remark by A&M faculty member Gerald North, which appeared in an article by Houston Chronicle science writer Eric Berger in 2007. North suggested two possible reasons for the exclusion of such projections: “It is very hard to distinguish between ignorance and political motivation, but both hypotheses fit the data.”

A top TWDB staff official, quoted in the same Chronicle article, said that if evidence for global warming’s impact were to increase in the next five years, the water board would consider the phenomenon in the 2012 report.

Since the 2007 Water Plan’s preparation, scientific agreement that human-caused climate change is happening and poses various problems has solidified in a number of prestigious reports from organizations such as the Intergovernmental Panel on Climate change and the U.S. National Academy of Sciences.

Last year, for instance, the National Academy published [PDF] a study that surveyed 1,372 climate researchers and their publication and citation data. The researchers concluded that 97 to 98 percent of the climate scientists who were “most actively publishing in the field support the tenets of [man-made climate change] outlined by the Intergovernmental Panel on Climate Change, and the relative climate expertise and scientific prominence of the researchers unconvinced of [such climate change] are substantially below that of the convinced researchers.”

Regarding Texas specifically, Nielsen-Gammon told Texas Climate News earlier this month that “it’s clear … that when Texas is in a drought, global warming will make it worse,” and that “global warming has already amplified the impacts of the current drought.”

Despite such statements by scientists, however, a number of elected officials, especially prominent Republicans including Perry and other GOP presidential contenders, have expressed doubt about the validity of scientific projections about man-made climate change. This month, for instance, Perry said “a substantial number” of climate scientists have “manipulated” findings. Such charges have been rejected consistently in recent years by several formal investigations in the U.S. and the United Kingdom.

While the multi-year Texas drought of the 1950s still ranks as the state’s worst prolonged drought on record, Nielsen-Gammon has concluded that the current one is the worst 12-month dry spell ever recorded. Will the current drought drag on? Very likely, the state climatologist wrote in a blog post on Aug. 19:

For the next few months, the Pacific Ocean is very important, and the 50 percent chance of a La Niña next winter (according to the National Weather Service) is not especially good news, since the current drought was triggered by a La Niña. There are glimmers of hope in the facts that this next one is not forecasted to be as severe as the last one and that it’s quite possible to have a wet year even during a La Niña. Nonetheless, I’ve started telling anyone who’s interested that it’s likely that much of Texas will still be in severe drought this time next summer, with water supply implications even worse than those we are now experiencing.

Worsening water-supply problems already plague much of the state. If drought conditions linger next year, it will be “a situation we’ve never seen before,” Vaughan warned during the Houston panel discussion.

There will be “no quick fix” to deal with such conditions, because Texas has experienced such a tremendous population increase and increased water demand since the historical drought of the 1950s, he added.

A legislatively mandated publication deadline at the end of the year has compelled the Water Development Board to cut off its inclusion of data from the current drought as the possible worst-case scenario in the 2012 State Water Plan, Vaughan said. But the agency’s attention to this year’s drought is proceeding, he added, with officials comparing the conditions in the 1950s to the current drought in “every way we can think of.”

TWDB officials project the state will face a water shortage in 2060 because of continuing population growth in coming decades, he said. Texas, he added, will need to implement “every possible scenario” to address growing water demand and find the “political will” to fund water-supply recommendations.

Texas must develop additional water supplies and learn how to manage its water use more effectively, he said – “from cradle to grave, from the raindrop to the estuary.”

Nielsen-Gammon and his A&M colleagues such as North are not alone among climate experts in warning about water-related impacts of global warming in Texas.

Katharine Hayhoe, a faculty member at Texas Tech University who is a widely recognized authority on regional impacts of climate change, had this to say in an interview last week with the Yale Environment 360 website:

Each region will experience warming temperatures, changing precipitation patterns, rising sea levels. But the impacts are going to be very different based on the specific vulnerabilities of each region. So starting in my own region, in the southern Great Plains, we are a semiarid environment and we are very water-short already. West Texas is a huge agricultural area and it lies over the Ogallala Aquifer. Since irrigation began in the 1960s, the Ogallala Aquifer has shrunk by over 150 feet in many locations. We have a very narrow window of time to do something meaningful about this issue, and that window is closing.” Estimates of how many years of water we have left in the aquifer, which has been there since the last ice age, say that as much as two-thirds of the aquifer could be unusable within 30 years. So then you overlay climate change on that existing problem, and you find that with higher temperatures you obviously need more water to provide plants with the same amount of irrigation because evaporation is a factor. We also find that precipitation patterns are becoming more unpredictable, we’re getting more heavy downpours and more dry periods in between, which reduces aquifer recharge, because when you get heavy downpours it runs off into the surface water and then obviously you’re not getting any recharge. So climate change is exacerbating the problem we have, and it’s the same across most of the Southwest, which is very water-short.

A panel of climate and infrastructure experts, in a 2008 report to the Houston-Galveston Area Council, recommended [PDF] that officials factor projections about human-caused climate change into regional water planning around Houston. Their suggestions included:

Adopt and implement water conservation plans – Because the region may experience extended periods between rain events and higher temperatures, local governments should adopt and implement water conservation plans with an array of best management practices, from low-flow fixtures to less water intensive landscaping practices to water restrictions, to suit that community’s needs. Some building code changes may be required.

[Disclosure: The Houston Advanced Research Center publishes Texas Climate News. Gerald North was an editor of a new HARC-commissioned book that was published by University of Texas Press, The Impact of Global Warming on Texas. TCN editor Bill Dawson wrote the book’s introduction. Robert Harriss, HARC president and CEO, was a member of the panel of experts that made recommendations to the Houston-Galveston Area Council.]