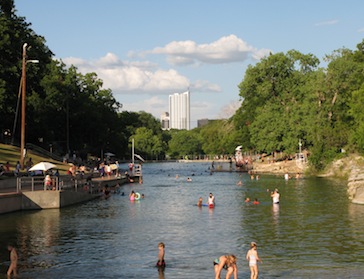 [Update: By a 3-0 vote on June 22, the commissioners who oversee the Texas Commission on Environmental Quality rejected the petition discussed in this article. On July 21, the petitioners asked a state district court in Travis County to reverse the TCEQ decision.]

Is the atmosphere a public trust, which the government should therefore protect for the benefit of future generations?

A citizens’ petition on the June 22 agenda of the Texas Commission on Environmental Quality argues [PDF] that it is, asking the TCEQ to adopt a plan to reduce emissions of climate-changing carbon dioxide from the use of fossil fuels.

The petition is part of a nationwide legal initiative, launched in May, that seeks such climate-protecting regulations. It includes lawsuits against the federal government and 11 states, plus petitions filed with officials of Texas and 39 other states.

Coordinating the legal effort is an Oregon-based group called Our Children’s Trust, in partnership with the California-based Kids vs. Global Warming, an organization founded by a 12-year-old who is currently a high school junior.

As in other lawsuits and petitions in the initiative, the petition before the TCEQ was filed on behalf of young people. The Texas petitioners are Angela Bosner-Lain, 25, along with Brigid Shea, an adult representing an unnamed 15-year-old, and Karin Ascot, an adult representing children aged 3.5 years and 8 months. The three minors were not identified to protect their privacy.

Ascot and Shea, a former member of Austin City Council, are environmentalists who have been involved with efforts to protect that city’s famed Barton Springs swimming pool and other springs and streams in Central Texas’ Edwards Aquifer region. Shea’s professional activities in recent years have included work in the climate arena as principal and co-founder of Carbon Shrinks, a consulting firm “specializing in carbon reduction and community stakeholder strategies.”

The TCEQ petition was filed by Adam Abrams, staff attorney for the Texas Environmental Law Center, a year-old, non-profit law firm in Austin. He told Texas Climate News he realizes the effort “is a long shot.”

Indeed. It would be a surprise of mind-blowing proportions if the TCEQ approved the petition, considering its recent history on the climate issue.

TCEQ Chairman Bryan W. Shaw, for instance, has joined other top state officials in challenging the very body of scientific findings about manmade climate change that the petition is based upon. Shaw also joined Attorney General Greg Abbott in refusing to implement federal climate-protection rules to limit industrial emissions of carbon dioxide. The campaign by Our Children’s Trust maintains the federal regulations need to be tougher.

Besides all that, the TCEQ staff recommended [PDF] in a June 3 memorandum to Shaw and the two other commissioners that they deny the petition.

The Texas commissioners’ likely rejection of the petition could not be appealed to the courts. The Texas Administrative Procedures Act allows such appeals only when an agency adopts requested rules. But besides publicizing the argument that climate change threatens future generations, other legal actions in the broader initiative by Our Children’s Trust might conceivably stand a better chance than the TCEQ petition.

The overall effort is based on the legal Public Trust Doctrine, which dates back to ancient Rome. A writer on the Climate Law Blog of Columbia University Law School’s Center for Climate Change Law noted on May 10, for instance, that “all it takes to keep the issue alive is for one state court to recognize a new climate change-related cause of action under the Public Trust Doctrine. In filing cases in states around the country, the plaintiffs are hoping to find a judge willing to do just that.”

At the time the lawsuit against the federal government was filed in U.S. District Court in San Francisco last month, Michael B. Gerrard, director of the Columbia center, told the New York Times that the plaintiffs were “trying to use all available options in view of the failure of Congress” to pass a law to curb climate-changing emissions.

The Times also quoted Lisa Heinzerling, an environmental law expert at Georgetown University: “Part of this is keeping the issue alive in lots of different settings and having all the branches, including the courts, continually react to it.”

The legal team representing the plaintiffs in the federal case includes the law firm of Pete McCloskey, a former Republican congressman from California who became a Democrat in 2007. In announcing [PDF] the federal lawsuit, McCloskey said:

This is something new – no climate litigation in the past has ever gone back to the first principle that the government must protect the public trust. The large body of litigation brought under environmental statutes is too narrow for the crisis at hand. Science, not politics, defines the fiduciary obligation that trustees must fulfill – it’s the most common sense, fundamental legal footing for the protection of our planet.

The Texas petition and the other related petitions and lawsuits seek rules to ensure that carbon dioxide emissions peak this year and are then reduced by at least 6 percent per year, starting in 2013. The aim is to help lower the atmospheric concentration of CO2 to 350 parts per million (350 ppm), a level deemed safe by some leading climate scientists and environmental advocates.

The petition before the TCEQ cites the conclusion by the great majority of mainstream climate scientists that human activities are hazardously altering the climate. It argues that potential impacts on Texas include rising sea levels that would displace 100,000 households in the Galveston area; significant reductions in water supplies and longer droughts; proliferation of wildfires like those that have affected parts of the state this year; considerable damage to the agricultural industry, and increased threats to wildlife.

Personalizing the petition are comments on behalf of the individual petitioners. It says, for instance, that the unnamed 15-year-old petitioner:

[…] is very concerned that the effects of climate change will dramatically harm his future. He enjoys swimming at Barton Springs and in the area lakes and creeks. The increasing effects of drought and high temperatures due to climate change are threatening these water resources. He worries that the springs and creeks may dry up. In addition to the loss of something he loves to do, the endangered species that live in Barton Springs would be harmed and the region might suffer from a loss of drinking water.

In recommending denial of the request, the TCEQ staff memo asserted that Texas is currently suing the Environmental Protection Agency over the very issues at the heart of the petition; that a section of Texas law allowing regulation of climate-altering gases “does not require commission action” nor “dictate how the commission should control [greenhouse gases];” that control measures in Texas “will not necessarily impact” global levels of the gases, and that the 350 ppm level sought by the petitioners has never been formally adopted by the EPA as a mandatory standard under the federal Clean Air Act.

The memo added that the Public Trust Doctrine cited by the petitioners “has never been applied to protection of the atmosphere, in any jurisdiction in the United States. Its primary use has been to protect beaches and navigable waterways for commerce.”

Furthermore, the memo argued, the petition asks the TCEQ to take actions for which it has no legal authority, including the regulation of carbon dioxide in vehicle exhaust, a power the Clean Air Act reserves for the federal government.

While Texas officials stress that the federal government alone has that authority, they also don’t want U.S. officials using it. On June 3, the same date on the agency staff’s memo to the TCEQ petitioners, Abbott filed a brief in the U.S. Court of Appeals for the District of Columbia, arguing the illegality of federal rules aimed at reducing CO2 emissions from vehicle tailpipes by improving fuel efficiency.

As with Texas’ legal attack on federal rules to limit industrial emissions of greenhouse gases, the Austin American-Statesman reported that Abbott again challenged the scientific validity of the federal finding that such emissions threaten public health. The TCEQ petitioners, meanwhile, are citing that finding as a reason the commissioners should regulate those gases.