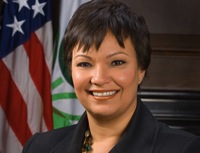 EPA Administrator Lisa P. Jackson: “The endangerment finding is based on years of science from the U.S. and around the world.”

As expected, the Environmental Protection Agency on Thursday firmly rejected petitions by Texas, Virginia, the U.S. Chamber of Commerce and others that asked the EPA to reconsider its formal conclusion that greenhouse gases endanger public health and the environment and therefore warrant regulation.

The EPA is planning to phase in rules early next year based on this “endangerment finding.” The regulations, drafted under the federal agency’s Clean Air Act authority, will impose limits on emissions of climate-changing gases from major industrial sources including power plants and oil refineries.
When they announced Texas’ administrative challenge of the endangerment finding (the petition rejected Thursday by the EPA) and an accompanying legal challenge (still pending in the federal courts), top Texas officials alleged in February that the EPA’s finding was based on “discredited” science and that federal regulation of those gases would hurt the state’s economy.

Texas A&M University’s entire Department of Atmospheric Sciences backed the EPA finding, however, and A&M scientists joined climate experts on the faculties of Rice University, Texas Tech University and the University of Texas to declare in response to the state’s contentions that “the science of climate change is strong.”

In rejecting the challenges by Texas and allied petitioners, EPA Administrator Lisa P. Jackson, echoing the Texas scientists, said “the endangerment finding is based on years of science from the U.S. and around the world.”

Texas and others had alleged in their petitions for EPA reconsideration that the finding was based on serious flaws in scientists’ conclusions about climate change that were revealed in emails leaked from a British university and in subsequent media reports about a few errors in the voluminous reports of the United Nations-sponsored Intergovernmental Panel on Climate Change (IPCC).

For instance, Attorney General Greg Abbott said the IPCC is “a scandal-plagued international organization that cannot be considered objective or trustworthy.”

Jackson said, however, that the allegations by Texas and others were based “on selectively edited, out-of-context data and a manufactured controversy” and had “provide[d] no evidence to undermine our determination.  Excess greenhouse gases are a threat to our health and welfare.”

Several independent investigations have found no evidence that the leaked emails, including messages from several prominent American climate scientists, revealed manipulation of scientific findings, as climate-change skeptics have charged. For example, the former chairman of the House of Lords’ science and technology committee who headed one British inquiry said it found “absolutely no evidence of any impropriety whatsoever.”

Reporters for the Associated Press conducted what they called “an exhaustive review” into the email messages and concluded that they did not “support claims that the science of global warming was faked.”

In line with such findings, the EPA said in announcing its rejection of Texas’ challenge and the other petitions that the agency’s review of their charges “shows that climate science is credible, compelling, and growing stronger.”

Gov. Rick Perry’s office released a statement in which the governor said he was “disappointed, but hardly surprised” by the agency’s decision because of the Obama administration’s  “ongoing disregard for Texas air quality successes and Texas jobs.”

The “ongoing disregard” assertion was a reference to Texas’s current battle with the EPA over the federal agency’s rejection of key elements of the state’s program for issuing permits regulating air pollution (not including greenhouse gases) from major industrial sources. Authority to issue those permits had been delegated to the state by the EPA under the Clean Air Act.

“The State of Texas will continue to fight this federal overreach by unelected bureaucrats through appropriate legal action, which I hope will allow us to continue our effective environmental programs while protecting countless Texas jobs,” the governor added.

Noting that Texas’ court challenge of the EPA finding is still pending, Perry said that legal petition continues to allege that the IPCC was “discredited by evidence of key scientists’ lack of objectivity, coordinated efforts to hide flaws in their research, attempts to keep contravening evidence out of IPCC reports and violation of freedom of information laws.”

The EPA issued this summary of its detailed rebuttal of such charges by Texas and the other parties that filed administrative challenges with the agency itself:

Response: EPA reviewed every email and found this was simply a candid discussion of scientists working through issues that arise in compiling and presenting large complex data sets.  Four other independent reviews came to similar conclusions.

Claim: Petitioners say that errors in the IPCC Fourth Assessment Report [in 2007] call the entire body of work into question.

Response: Of the alleged errors, EPA confirmed only two in a 3,000-page report. The first pertains to the rate of Himalayan glacier melt and second to the percentage of the Netherlands below sea level. IPCC issued correction statements for both of these errors. The errors have no bearing on Administrator Jackson’s decision. None of the errors undermines the basic facts that the climate is changing in ways that threaten our health and welfare.

Claim: Petitioners say that because certain studies were not included in the IPCC Fourth Assessment Report, the IPCC itself is biased and cannot be trusted as a source of reliable information.

Response: These claims are incorrect. In fact, the studies in question were included in the IPCC report, which provided a comprehensive and balanced discussion of climate science.

Response: Petitioners misinterpreted the results of these studies. Contrary to their claims, many of the papers they submit as evidence are consistent with EPA’s finding. Other studies submitted by the petitioners were based on unsound methodologies. Detailed discussion of these issues may be found in volume one of the response to petition documents, on EPA’s website.

Full documents pertaining to the EPA decision are posted here. The Texas petition is posted here.

Although he has voiced skepticism for several years about the science of manmade climate change, Perry’s statement on Thursday reiterated a common theme of his – Texas “has reduced nitrogen oxide emissions by 53 percent, cut ozone levels by 22 percent and reduced carbon dioxide emissions more than nearly every other state, all without government mandates or extravagant fines.” (Actually, both nitrogen oxides and ozone have been subject to “government mandates” for decades under the Clean Air Act, with associated regulations enforced by federal and Texas officials.)

Nods to the desirability of cutting carbon dioxide, the principal greenhouse gas, were also included in two earlier statements by Perry’s office this week – one on a wind-energy research grant to Texas Tech University and one on remarks by the governor in Houston on the “challenge” of  “federal overregulation” of the energy industry.

Both said Texas, among other actions to add new electricity-producing capacity, is “looking to add new clean coal plants, which will capture and sequester carbon dioxide emissions or use carbon dioxide to increase production from Texas oil fields.”