No one ever said a transition to lower-carbon forms of energy would be without turmoil. And sometimes it comes in novel forms, several of which have been in the news lately. 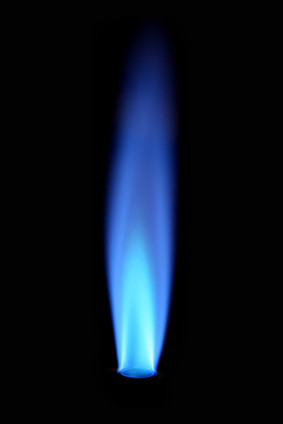 For years, producers of natural gas (with the lowest carbon dioxide emissions of the main fossil fuels) have been promoting it as an environmentally superior alternative to coal (with the highest CO2 emissions) for generating electricity.

Now, the Wall Street Journal relates in an article datelined from the Texas town of Taft near Corpus Christi, natural gas is squaring off against the wind industry, which promotes itself as an essentially zero-CO2 form of electricity production.

Noting that the wind industry has grown from “bit player” status just four years ago to generating “a significant share” of Texas’ electricity today, the Journal’s Russell Gold reported this week that “the growth of wind power has attracted powerful critics: the owners of natural-gas power plants.”

The online version of the article is available only to Journal subscribers, but a couple of passages provide the essence:

Many environmental groups talk of how wind and relatively clean-burning natural gas can partner to displace dirtier coal, creating a path to power the U.S. while releasing fewer greenhouse gases. A bitter fuel fight in Texas points to a different future: one in which gas and wind are foes.

The gas and wind factions have been clashing over the state’s operating rules for the past several months. The gas people say the playing field is tilted in wind’s favor; wind accuses gas of trying to snuff out the nascent wind energy sector.

The success of wind power in Texas has come at the expense of natural gas. If the wind build-out continues, by 2013 the amount of gas consumed to make electricity could fall by 18.5%, as gas plants sit idle for longer, according to Tudor Pickering & Holt, a Houston-based energy investment bank.

At the heart of the battle is a fight over the vicissitudes of wind itself. The wind industry argues that since it can’t control when the wind blows, it shouldn’t be held to the same rules that require everyone else to make payments when they fail to deliver promised power. The natural-gas generators say everyone should operate under the same rules, and lament that wind’s success is merely coming at the expense of another relatively clean energy source.

The fight is taking place largely outside the public eye in committees of the Electric Reliability Council of Texas, or ERCOT, as Texas’ main grid operator is known. Gas generators are backing rule changes that collectively require millions of dollars of retrofits to existing wind farms and add new costs.

None of the proposed changes would derail wind power, but they threaten to slow its growth….

In one telling detail, Gold said wind-power producers were “furious” when Houston-based Calpine Corp., which operates natural gas plants in Texas and elsewhere, proposed that ERCOT penalize them when calming winds prevent on-schedule delivery of electricity.

If there’s any doubt that the gas-versus-wind squabble in intricately bound up with the climate issue, consider that Calpine boasted – as TCN Journal reported last month – that its new California permit for “the nation’s first power plant with a federal limit on greenhouse gas emissions” placed it at “the forefront of the fight against global warming.”

In Washington this week, independent natural gas producers continued to promote the climate-friendliness of their product as senators involved in negotiations on climate-energy legislation reportedly focused on alternatives to the House-passed cap-and-trade plan for lowering carbon dioxide emissions.

He said that gas’s potential contribution now is dramatically different from the 1970s when energy policymakers considered it suitable only for heating homes and businesses, and looked more to coal to generate electricity. “We have an opportunity now to look again at the power generation mix, which is 44 percent coal and 24 percent gas, much of which is underutilized,” Solich said. “We also are learning more about wind and solar power, which are intermittent, and which fuel works best to back them up without creating more greenhouse gases.”

Wind-power producers, meanwhile, found themselves on the defensive in response to another Washington development this week – a proposal by a group of lawmakers to enforce a “buy American” rule in federal stimulus funding for alternative energy development. The New York Times’ John Broder reported Wednesday:

Four Democratic senators are calling on the Obama administration to halt spending on a renewable energy program in the economic stimulus package until rules are in place to assure that the projects use predominantly American labor and materials.

The senators said that more than three-fourths of $2 billion spent on wind-energy projects supported by the stimulus package had gone to foreign companies. They said that effectively undercut the purpose of the stimulus program — formally known as the American Recovery and Reinvestment Act — which is to jump-start the American economy and create jobs here.

Broder noted that New York Sen. Charles Schumer, one of the four pressing the issue, had complained last fall about the fact that turbines for a $1.5 billion wind project in West Texas were to be built in China and that the project would yield 3,000 jobs in China compared to 300 U.S. jobs.

“After Mr. Schumer’s public complaint,” Broder added, “the developers of the wind project said they would build a new wind turbine factory in the United States to produce the bulk of the components for the project and create 1,000 new jobs in this country.”

Ben Geman of the Washington-based newspaper The Hill reported that wind-power producers quickly pushed back, using a job-focused argument of their own to argue that the proposal’s effect would actually be contrary to the stated intent: