By the time that an official deadline passed this week, only two other states – Alabama and Virginia – had followed Texas in filing petitions challenging the U.S. Environmental Protection Agency’s finding that climate-changing greenhouse gases threaten human health and the environment. 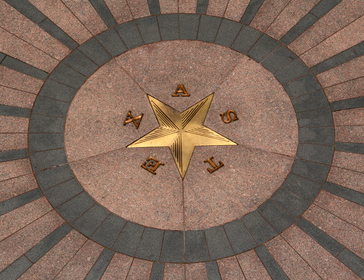 In terms of state petitioners, that meant there were three states against the EPA finding and 16 states (joined by New York City) siding with the EPA over the finding, which laid the legal groundwork for the agency to impose the first-ever federal regulation of carbon dioxide and other greenhouse  pollutants.

Even so, other states still have a chance to weigh in on the issue. Houston attorney Richard Faulk, who backs the Texas position, told The Texas Tribune that others have 30 days to intervene on Texas’ side in its challenge, and speculated that states with heavily resource-extractive economies may do so.

(Louisiana, for example, is already on the record asking the EPA to reconsider its greenhouse-gas finding, though so far in the form of letters from state department heads, who work for Republican Gov. Bobby Jindal, and not a formal legal petition from Democratic Attorney General James D. “Buddy” Caldwell.)

Meanwhile, the nation’s governors are now being asked to support a congressional effort, led by Republican Sen. Lisa Murkowski of Alaska, to prevent the EPA from issuing regulations based on the greenhouse-gas finding. This development was revealed today by Frank O’Donnell, director of the Washington-based environmental group Clean Air Watch.

O’Donnell released a draft letter to Congress that argues such regulations would be economically harmful and asks lawmakers to block them. He said it is being circulated among the governors’ offices by Republican Gov. Haley Barbour of Mississippi in advance of a meeting this weekend of the National Governors Association.

O’Donnell told Texas Climate News that he obtained the letter from “the office of a state that I expect will fight against this.” He said that he anticipates “some real push-back from states concerned about climate – and the ability of the EPA to enforce the Clean Air Act.”

Barbour was credited with playing a key role in persuading President George W. Bush, just weeks into his first presidential term in 2001, to abandon his 2000 campaign pledge to regulate emissions of carbon dioxide from coal-fired electric power plants. The Los Angeles Times reported later that year that Barbour, a former chairman of the Republican National Committee who also served as a campaign strategist for Bush in 2000, was working as a lobbyist for “several electricity producers” when he wrote a “sternly worded memo” to Vice President Dick Cheney, urging that Bush renege on his emissions promise.

Concerning Barbour’s current appeal to other governors to help block greenhouse-gas regulations by the EPA, O’Donnell told TCN: “The bottom line is this is an attempt to kneecap the Obama administration by one of the key architects of the Bush-Cheney approach to climate.”

However things turn out with regard to Murkowski’s effort in Congress, the simultaneous legal battleground shaping up over the EPA finding became considerably more crowded this week. A variety of industry groups, conservative organizations and others filed challenges by the deadline for doing so. Combined with the three state challenges, that meant a total of 16 petitions against the finding, the Greenwire news service reported. Those filing objections include the National Association of Manufacturers, American Petroleum Institute and National Petrochemical and Refiners Association.

Can these challenges, including the one launched by Texas, succeed in stopping EPA regulatory limits on greenhouse-gas emissions, which is their ultimate aim? Opinions predictably differed after the petitions’ filing. Like the Texas petition (technically, two companion petitions – one to the EPA, one in federal appeals court), some of the others that were filed, such as Virginia’s, reportedly targeted the allegedly shaky scientific underpinning of the EPA action.

[Houston attorney Faulk,] who heads the environmental practice at the firm Gardere Wynne Sewell, endorsed the state’s stance, saying the EPA only can make an endangerment finding after determining — independently — that ensuing rules would improve existing conditions.

“No regulations the U.S. unilaterally adopts can possibly reverse global warming by themselves,” Faulk said. “Their impact on the global climate will be minimal, especially when China, India and other major emitters continue to release gases without any restrictions.”

But Victor Flatt, the Taft professor of environmental law at the University of North Carolina, found the petition “essentially baseless” since EPA referred to — but did not totally rely on — the findings of the IPCC [the U.N.-sponsored Intergovernmental Panel on Climate Change].

“The scientific basis of EPA’s endangerment finding is overwhelming,” Flatt said, “and certainly rises above the level of evidence they need to make the finding.”

The EPA’s “endangerment finding” about greenhouse gases was made possible by a Supreme Court ruling in 2007  that the agency had the legal authority to regulate such gases because they “fit well within the Clean Air Act’s capacious definition of air pollutant.”

Kathleen Hartnett White, who formerly chaired the Texas Commission on Environmental Quality as an appointee of Gov. Rick Perry and is now affiliated with the Texas Public Policy Foundation, a conservative think tank, argued, however, that the EPA’s finding was “an abuse of its authority, and our state leadership is on solid ground to challenge it in court.”

But Jim Marston, Texas regional director of the Environmental Defense Fund and formerly an assistant attorney general in the environmental protection division of the Texas attorney general’s office, said the Texas petition was “legally unsound” and reminiscent “of a sad time in Texas history from the ’50s, when Texas politicians sought to nullify decisions of the U.S. Supreme Court.”

Forrest Wilder, who covers environmental issues for the liberal Texas Observer, wrote a blog post in which he questioned the effectiveness of the Texas petition’s emphasis on science:

The lawsuit can’t possibly be intended for anyone who has even a cursory understanding of climate science.

The 38-page legal brief is filled with footnotes, giving the appearance that it’s been carefully researched. But on closer inspection many of the references are to rightwing blogs, “studies” by armchair climate analysts, and obscure anti-climate groups like the New Zealand Climate Science Coalition.

(Faulk told the Tribune that for all of its many science-oriented assertions, the Texas petition was, from a legal standpoint, actually a “process challenge as opposed to a substantive challenge.”)

Zachary Roth of the liberal internet publication Talking Points Memo saw an electoral motive in the petition announced by Perry and other top Texas officials on Tuesday:

“Last year, the governor – who faces a contested GOP primary race, which includes a Tea-Party-backed candidate who has lately caught fire – raised the threat of seceding from the union. And on Tuesday, he opened a new front in his quest to tout his conservative bona fides.”

The headline on the article: “If At First You Don’t Secede … Sue The EPA”.