A personnel shift at the top of the state’s lead environmental agency is not expected to bring with it any change in Texas’ official approach to climate change.

If they signify anything on the climate issue, the moves at the Texas Commission on Environmental Quality appear to underscore Gov. Rick Perry’s forceful and often-expressed skepticism about manmade global warming and opposition to regulatory policies aimed at combatting it.

On Thursday, Bryan Shaw will become chairman of the TCEQ. Perry announced last month that he was elevating Shaw to that presiding position. The governor appointed Shaw to the three-member commission in 2007, and the state Senate confirmed the appointment in May. His TCEQ term expires in 2013.

Shaw, an associate professor in the Biological and Agricultural Engineering Department of Texas A&M University, has publicly voiced skepticism on several occasions about the science behind the conclusion of many climate experts – including the unanimous faculty of A&M’s own Atmospheric Sciences Department – that human activities are almost certainly warming the earth’s climate.

For details about Shaw’s opinions on climate change, see an earlier article in TCN Journal,A difference of opinion.

Buddy Garcia, another Perry appointee, has served as TCEQ chairman since 2007 and will remain as a commission member. His term expires in 2011.

At the same time that he named Shaw to the chairman’s job, Perry appointed a new commissioner, Carlos Rubinstein, who was the deputy executive director of the TCEQ staff. Rubinstein, whose commission term will expire in 2015, took the seat that had been occupied by Larry Soward, also a Perry appointee. Soward’s term expired on Aug. 31.

Taking note of his retirement, the Associated Press reported that Soward had “surprised everyone by frequently siding with environmentalists” as a commissioner.

Climate change was a key issue on which Soward allied himself with environmentalists and, at the same time, outspokenly dissented from Perry’s views – though he told the AP that he never felt any pressure from Perry or his office to modify his stances on any subjects. 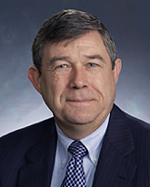 One important example of Soward’s difference with the governor on climate change was the “endangerment finding” about carbon dioxide and other greenhouse gases that the U.S. Environmental Protection Agency proposed in April.

In it, the EPA concluded that “greenhouse gases contribute to air pollution that may endanger public health or welfare.” Such a finding is a legally required precursor for possible regulation of greenhouse gases by the EPA under the federal Clean Air Act.

Among other shots by Texas state officials at the EPA action, Perry spoke out on June 11, decrying the EPA’s decision “to make CO2 a toxic substance” – an idea that he said was “quite a leap.”

Soward, however, noting that he was writing “in my individual capacity as a (TCEQ) Commissioner,” filed formal comments on the EPA proposal on June 23 that sided with the federal agency:

The proposed rule correctly finds that greenhouse gases (GHGs) in the atmosphere endanger public health of current and future generations. In proposing this finding, the EPA relied on recently published, consensus-based, peer-reviewed assessments and reports to make that determination….

Volumes could be written on the threats to our welfare as citizens of this Earth due to the effects of climate changes on such things as our weather; our terrestrial and aquatic ecosystems; our economy; our water resources; our societal infrastructure; etc. No reasonable argument can be made that GHGs do not endanger the welfare of the citizens of Texas, the United States and the World.

Soward pointedly prefaced his comments to the EPA by specifying that “I do not agree with nor support the comments filed by the Executive Director of the TCEQ” on the issue. He put the word “not” in bold letters.

Also on June 23, Executive Director Mark Vickery (whose second-in-command overseeing the TCEQ staff at that time was Rubinstein) filed the formal comments on the EPA proposal to which Soward referred. In them, he asserted:

…(T)he Clean Air Act (CAA) is not an appropriate vehicle to regulate Greenhouse Gases (GHG). For the most part, the CAA assumes that state and local governments are able through regulations and permit requirements to implement emission controls that will improve air quality. GHG are distributed relatively uniformly throughout the world and state and local emission controls would have little or no impact on global concentrations….

The Executive Director does not believe that any regulatory mechanisms under the CAA are suited for control of substances which, like GHG, are uniformly distributed throughout the world. The result would be the imposition of expensive, burdensome regulations with little or no chance of success without similar controls implemented worldwide.

Replacing Rubinstein as Vickery’s deputy is Zak Covar, a former aide to Perry who told the Austin American-Statesman in 2007 that the governor was “not convinced that (climate change is) an issue.”

The American-Statesman’s Asher Price reported last week on Covar’s ascension to the No. 2 spot on the TCEQ staff:

Covar’s promotion, made by the executive director of the agency, is another stage in his meteoric rise. It also raises questions about the interplay of politics, policy and personnel at the state agency.

The appointment of Covar, who is 33 and has a bachelor’s degree in poultry science from Texas A&M University, is unusual because he has a background in policy and politics; his predecessors as the agency’s chief operating officer were longtime state employees.

Covar began his career clerking for the House Environmental Regulation Committee and then advised Perry from 2005 to 2007, defending, among other things, the governor’s stance that scientists were still debating global warming.

He then went to work at the Texas environmental agency as the executive assistant to Commissioner Bryan W. Shaw and in June 2008 made the jump over to the agency’s staff side, as assistant deputy executive director.