A decade ago, Los Angeles and Houston were vying in a media-documented “race” for the unwanted crown of smog capital of America – the metro area with the worst record for ground-level ozone pollution. 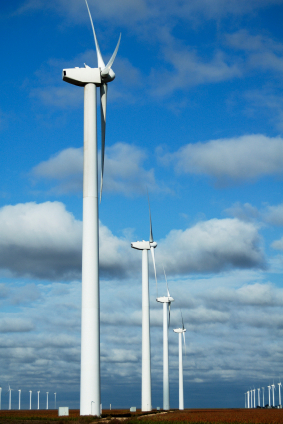 L.A. was the longtime smog champ. Then Houston briefly took the dubious title. Then Los Angeles re-seized and has held onto the No. 1 spot in the national ozone rankings.

This week, it almost seemed like another environmental race between L.A. and Houston was afoot – one of a very different sort – with the roughly coinciding announcements by the cities’ mayors that they are expanding the use of renewable energy.

Any direct city-to-city comparison of the new actions is not possible.

Los Angeles Mayor Antonio Villaraigosa, meanwhile, was pledging to replace the electricity produced by coal, which Los Angeles sells to nearly 1.5 million customers through the city-owned utility, with electricity made from cleaner, renewable sources.

Still, though the two announcements were not directly comparable – electricity for municipal operations in Houston and electricity for residents, businesses and others in Los Angeles – both illustrated a national trend that has evolved in recent years in which numerous city governments have turned increasingly to cleaner electricity sources.

In White’s announcement, released on Thursday, he said he had boosted to 32 percent from 27 percent the amount of electricity purchased for city operations that is generated on Texas wind farms.

“We begin taking this additional wind power today as a benefit for both today and the future,” he said in a news release. “As the energy capital of the world, Houston is committed to becoming the clean, sustainable energy capital of the world as well. Supporting clean sources of energy means helping put off the time when we’d all bear the cost of adding expensive new power plants and it also helps reduce harmful emissions.”

Houston is in 10th place on the list, which ranks companies and government entities in terms of the number of kilowatt-hours (kWh) of such electricity that they purchased in the preceding 12 months. Houston’s total purchase – all wind-generated electricity – was 350,400,000 kWh, or 27 percent of its power consumption.

The announcement issued by White’s office said that Houston “expects to use as much as 1.7 billion kilowatt-hours of this renewable energy in the next four years, through 2013. This is equivalent to the amount of kilowatt-hours needed to power 26,000 homes each year.”

Villaraigosa used his inaugural speech launching his second term as mayor to promise that Los Angeles would eliminate by 2020 its purchase of coal-generated electricity for customers of the city-owned utility, the Los Angeles Department of Water and Power (LADWP).

California does not have any coal-fired power plants, a leading contributor to greenhouse gas pollution, but the LADWP now gets 40 percent of its electricity from coal plants outside the state.

Coal and natural gas-fired power now account for 76 percent of the electricity delivered by the LADWP. By 2020, the LADWP expects to cut its carbon emissions by up to 60 percent from 1990 levels, according to the mayor’s office.

Villaraigosa said the LADWP will meet its goal of getting 20 percent of its power from renewables by 2010.