You might expect that the top prize in a contest to produce YouTube-friendly videos promoting solar power in Texas would be won by a 20-year-old college student.

If so, you would be wrong. The first-place winner of the Environment Texas group’s solar video contest was Ric Sternberg, a 64-year-old video producer-director based in the Austin area who works through his AiM Productions.

His winning entry was “Big Hot Texas Sun,” which clocks in at a tidy three minutes,12 seconds. It blends a fiddle-driven song with voice-over narration decrying Texas’ carbon footprint and touting its solar potential

Sternberg, whose video experience includes work at the original Woodstock Festival in 1969, told Texas Climate News that he’s a supporter of Environment Texas who learned about the video contest from one of the advocacy organization’s emails. He figured it was “right up my alley.” 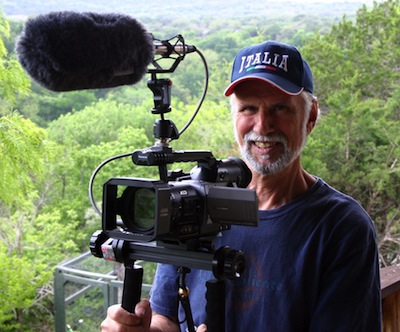 He recruited Frank Meyer, a singer-songwriter and green builder with a vocal resemblance to the late Johnny Cash, to contribute the song for the video. Several other Austin musicians accompany him, and the band ends up marching down a street to finish the song in front of a house where fiddle player Phoebe Hunt is perched on a roof sporting solar panels.

Sternberg wrote, shot, directed and edited the video. He and his wife, Annie Borden, read the narration, and several other individuals helped out with recording and production work.

“Everyone threw themselves into it,” he said. “They knew they’d only make some money if it got first prize. It’s nice to be able to throw some money their way.” (The award was $2,000.)

An old dog always learning new tricks – I’ve been a video guy since the 1960s, when the cameras weighed more than my car. Now I’m a YouTuber, using gear I can carry in my backpack. Video for art and politics has always been my passion, all the while supporting myself producing work for corporations, non-profits and governments, through my company called AiM Productions (Google it).Sternberg describes himself this way in the autobiographical blurb on his YouTube page:

Other entries in the Environment Texas contest are assembled on the group’s website.